I have written an algoritm to resolve a collision between two balls with conservation of momentum. It looks to work exactly as expected in my simulations. Here is the code:

Now I also want to make this work for more than two balls colliding at the exact same moment. My initial thought was that I could just solve this equation several times for each contact between balls. When I have a situation like a "Newton's cradle" where the balls is in contact in a "serial" way it's easy to just solve each collision on at a time and without moving the balls just go ahead and calculate the next and the next etc until reaching the last ball which will end up with all energy not lost along the way. This works fine also, albeit not very fast.

But what about for instance a case where three balls are in contact in a V-shape and the bottom ball is the one with a velocity (up in this case)? I mean how now do I distribute the energy between the other two balls? The equation I have only works for two balls and now I don't see how I can calculate this iteratively anymore. Can you help guide me in how I should think with this? Can I modify my Resolve-function to work with any number of balls? I mean with a set of $N$ balls with connecting surfaces and initial velocity vectors, what will the outcome velocities be? Is there a well known general solution for this?

I have tried out the method currently marked as the answer but I have unfortunately got a bit weird results in some setups. Be warned. I will probably revert back to resolving one collision at a time again. I will update this info when I have tried this more.

You need to setup a system of $K$ equations with $K$ impulse unknowns if derived from the $N$ balls whereas only $K$ of them are colliding at some time.

Here is how to do it: 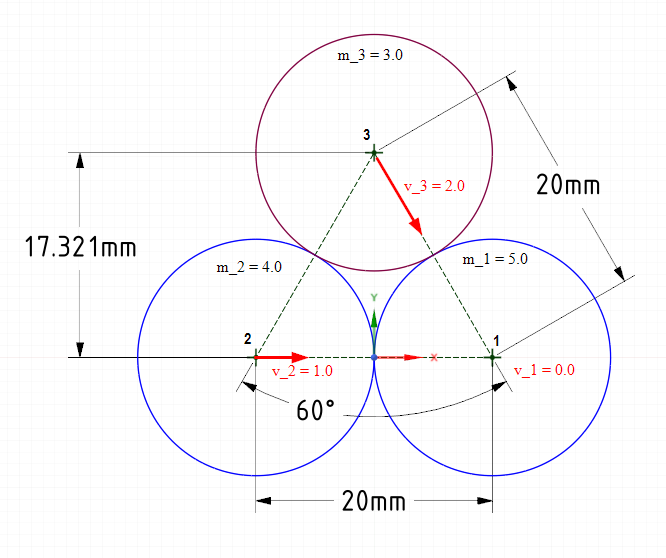 Use this MATLAB script to find their final velocties:

In the last part, I check the results against the law of contacts and the error is ~1e-15.

Unfortunately I have to agree with Jonathan Wheeler : There are no other formulas available, and your current method is probably the best there is even for only 3 balls.

In Newton's Cradle, the outcome is the same whether the balls are touching or not. A slight gap between balls gives the same final result. This suggests that your approach of splitting the multiple-body collision into a succession of pair-wise collisions will give the correct physical result. This is almost always possible in practice because if the resolution is increased - ie the time-step in the simulation is reduced - then one pair-wise collision can be seen to occur first.

The downside, as you have noted, is that this procedure may require excessive computation, because there could be many re-collisions between the same pair of bodies. If the simulation is being displayed in real time, the whole simulation could be slowed down noticeably whenever such a collision occurs. Hence the need for a method of deciding the outcome without so much iteration.

Except in a few situations in which there is some symmetry, there is (as far as I am aware) no known closed formula giving the result even for a 3-body collision, comparable with equations for the 2-body collision. This is because the simultaneous collision of 3 rigid-bodies is indeterminate - ie there are not enough constraints to match the number of variables.

As garyp suggests, including elastic deformation and forces in the model provides more constraints, enabling the outcome to be determined. However, modelling deformable bodies adds to the complexity of the program, and because of the coupling between forces the resulting equations are likely to require numerical solution by iteration. So the same problem of an increased computation time arises.

Symmetrical collisions of 3 identical balls include (i) the co-linear case, and (ii) one ball travelling perpendicular to the other 2, which are either stationary or move with the same velocity in the same or opposite direction to the 1st. However, such symmetrical cases will be extremely rare in a molecular motion type of simulation.

Conclusion: If you want your simulation to be an accurate depiction of a real 3-body collision, your current method (solving successive pair-wise collisions with sufficient time-resolution) is probably the most efficient available. The same method handles all multiple-ball collisions.

This is only a partial answer, but hopefully it will help.

In general, the 'three body' problem is quite hard to solve, and if you can, you may be better off modeling the collision of three balls in three pairs of collisions. I don't think that solving these conservation equations above will lead to any elegant formal when $n \ge 3$.

Not the answer you're looking for? Browse other questions tagged newtonian-mechanics momentum collision computational-physics software or ask your own question.

4
How does a (near) elastic collision work at a microscopic level?
1
Force to deflect ball colliding with wall
6
Calculating distribution of force in a N-body system of balls
3
Number of collisions of one ball between two another balls
1
Why do steel Newton's balls work?
1
What happens when in space a basketball flies and hits another resting basketball?
0
Question about ball collision in 2D and conservation of momentum & kinetic energy
0
Elastic collision of a ball against a container wall