How do we know that Quasars actually produce collimated jets?

How did astrophysicists know this? Of course it's very difficult to directly see the jets from Quasars, so I'm wondering how did they come to the conclusion that Quasars produce collimated jets or beams?

Because of images such as this one.

A radio image of a quasar, taken by the Very Large Array. The white dot in the middle is the core, while the protrusions pointed top-left and bottom-right are jets, traveling at relativistic speeds, culminating in lobes.

It’s not known for sure what causes the jets. It’s thought that the black hole’s spin and mass interact with the magnetic field near the black hole to accelerate the particles. While some evidence supports this model, it's been difficult to test, mainly because scientists lacked a full knowledge of how bright the accretion disks is. But a new study of a sample of blazars (quasars with jets that point toward Earth) shows a clear correlation between the jets' power and the accretion disk’s brightness. This suggests that the magnetic field is a factor in producing the jets.

The researchers examined 217 blazars using data obtained by the Fermi observatory, looking for some relationship between the jets’ power and the accretion disk. Blazars are useful because with a blazar, we get direct light from both the accretion disk and the jet, since the latter is pointed toward us. And we can tell which is which, because light from the jet is mostly in the form of gamma rays, while the accretion disk produces a broader emission spectrum. 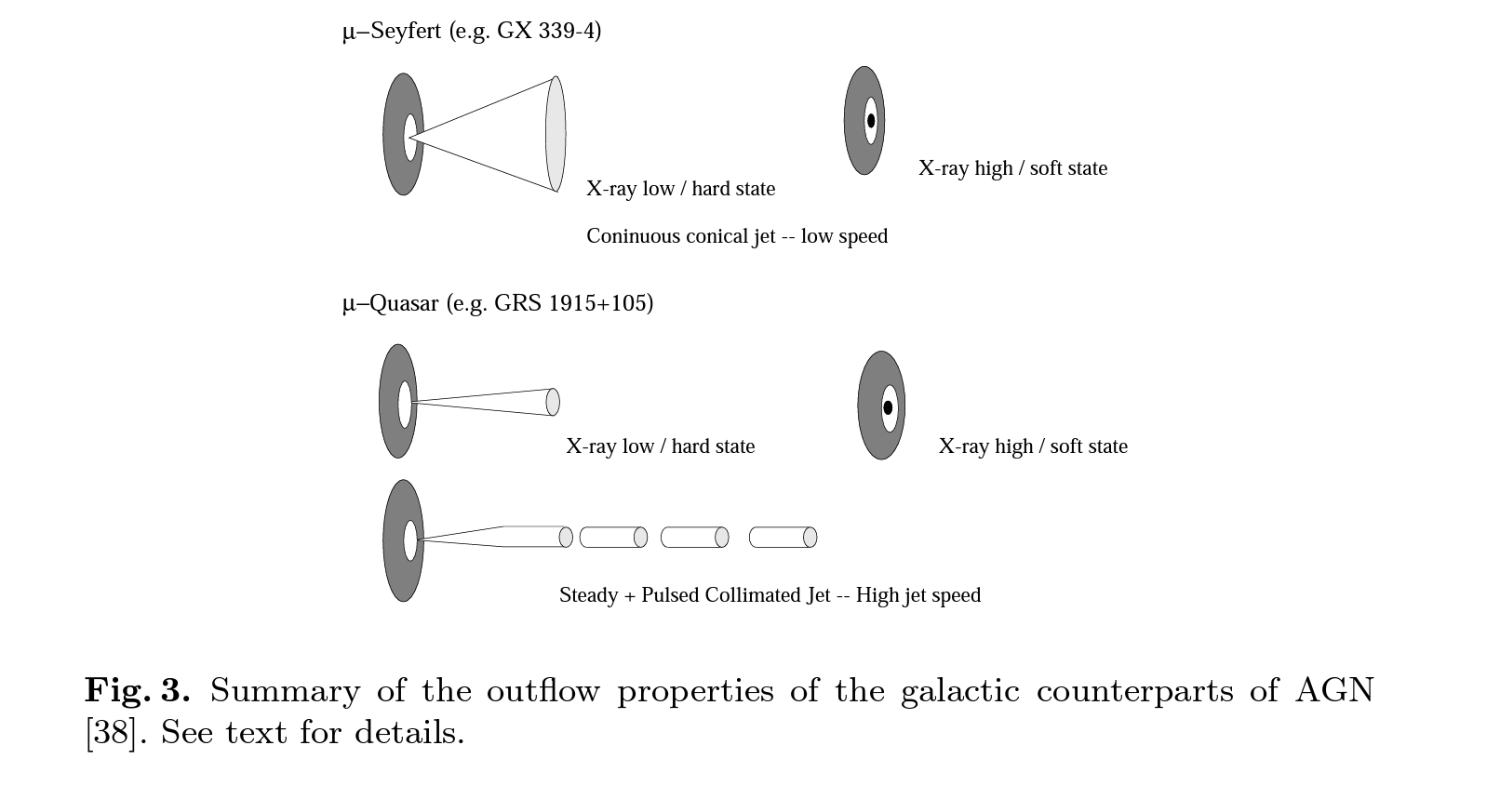 From this paper Jet Formation and Collimation in AGN and µ-Quasars, it would appear to depend somewhat on the velocity of the outflow.

I apologise I cannot provide a link to the paper, as my tablet cannot copy that , but from my limited reading, (and knowledge ), the collimation of the jet seem to depend it's velocity , which to me, makes intuitive sense.

Abstract. We briefly review our current understanding for the formation, acceleration and collimation of winds to jets associated with compact astrophysical objects such as AGN and µQuasars. All such outows may be considered to a rst approximation as ideal MHD plasmas escaping from a rotating and magnetized accretion disk with a magnetosphere around a central black hole. A crucial ingredient for a correct modelling of the steady state problem is to place the appropriate boundary conditions, by taking into account how information can propagate through the outow and ensuring, e.g., that shocks produced via the interaction of the ow with the external medium do not a ect the overall structure. As an example underlining the role of setting the correct boundary conditions, we make the analogy of the critical surfaces in the steady and axisymmetric MHD problem with the event horizon and ergosphere of a rotating black hole in relativity. We discuss the acceleration of the outow, by gas, radiation, or wave pressure gradients and also by magnetic mechanisms, showing the important role played by the disk corona in the vicinity of the black hole. Pressure and magnetic connement both may also play a role in conning the outow, although magnetic hoop stress connement is likely to be a rather dominant process in tightly collimated outows.

Comments included here in case of deletion and due to their relevance.

It is my understanding that a collimated jet is one that lies asking the axis of rotation of the object ejecting it. The image in question & its description absolutely does not show this is the case.

From WetSavannaAnimal aka Rod Vance.

That is a good point - that we don't know whether the jet and rotation axis co-incide. But then the question arises: how do we know the rotation axis? We would need to resolve the accretion disk directly to at least see its orientation and / or resolve Doppler effects / relativistic beaming asymmetries in brightness. In any case, as in most of physics, this is supporting evidence for a jet, pending possible falsification by any demonstration that the rotation axis and jet do not co-incide.

I feel these two comments above do sum up the issue pretty well.

I would defer to Kyle's greater understanding of the subject regarding collinimation, but to a newbie is seems reasonable if you extend the concept from neutron stars to quasars. But as we, AFAIK, have much less knowledge of quasars, it may not be a correct extrapolation to make.

I would stress I am painfully aware that I am open to correction on all aspects of this.

I don't think this is a question with a definitive answer. However, even before imaging of collimated jets from (some) quasars became possible there were clear indications of the jet phenomena from a type of quasar referred to as blazars or sometimes BL Lac objects. These quasars were characterised by a very high inferred intrinsic luminosity (compared with most quasars) and a broad, rapidly varying and highly polarised, non-thermal continuum spectrum with few or weak discrete spectral features.

The interpretation of these objects was (and still is) that they are a population of otherwise "normal" quasars that have an orientation such that their relativistic jets are pointing along our line of sight. These produce highly beamed (collimated) radiation (predominantly synchrotron) and the high luminosities are explained by high Lorentz factors and Doppler boosting. This explanation demands that the quasars produce highly collimated jets of particles.

Not the answer you're looking for? Browse other questions tagged astrophysics relativistic-jets quasars or ask your own question.

5
Blandford-Znajek process: Why/how does the current flow along the magnetic field lines
21
How can Quasars emit anything if they're black holes?
2
Do AGN produce protons that are relativistic enough to collide with the CMB and make pions?
0
How do quasars produce light?
2
Why does the accretion disc radiate energy and matter?