How can we explain Saturn's non-spherical shape in terms of forces? [duplicate]

As we know the Saturn's shape is not spherical. In fact, its polar radius is almost 10% smaller than equatorial radius. This flattening is caused by the rapid rotation of this planet. 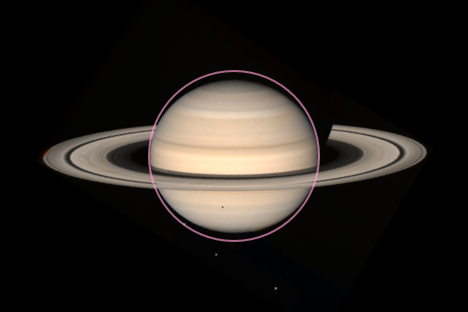 Question: how can we explain this flattening with forces?

Here is my unfinished attempt of explaining it. If we consider a fixed mass of material on the surface of the planet, the centripetal force is

Now we compare two identical masses located on the surface of the planet shown on the image below. One mass $A$ is on the equator and the other mass $B$ is near the pole. Mass $A$ will have bigger distance $r_a$ to the axis of rotation and, according to Equation 1, will require bigger centripetal force to keep it on the surface than mass $B$.

This is where I get stuck. While I understand the flattening intuitevely, I struggle to understand it in exact physics terms using the centripetal acceleration and forces. Can anyone help me finish my explanation, or suggest a better one?

This question is different from Why is the Earth so fat? because here I am seeking for a simple explanation of the flattening of Saturn in terms of centripetal forces. I am hoping to understand the principle — why is the flattening occurs — and not seeking for exact solution that gives me the shape of the planet. How can this question be answered that a high-school student can understand? 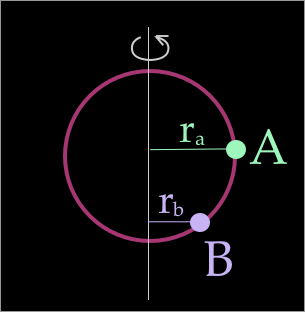 Attempt #2 of explaining the flatness of Saturn using centripetal forces 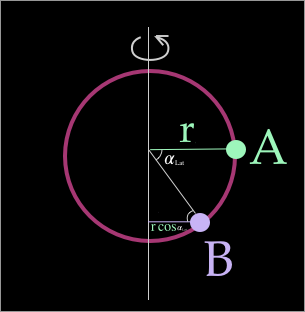 Figure 2: Distances from two clumps to the axis of planet's rotation. 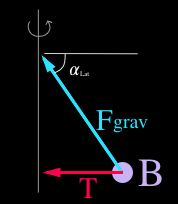 Figure 3: Forces acting on clump $B$.

Another force acting on $B$ is the force of tension $T$. This force of tension is the key idea and it is worth explaining what it means. Force $T$ arises if we view the planet as a rigid object where all different clumps of matter are stuck together. Those clumps of matter act like a 'rod' that connects $B$ to the axis of rotation. We will use the tension $T$ and the 'rod' as simplifications in order to understand the flattening of Saturn with simple concepts.

As Saturn rotates, clump $B$ naturally wants to move in straight line (Newton's 1st law). However, clump $B$ is tied to the center of the planet with this imaginary 'rod' that prevents $B$ from flying off the surface of the rotating planet.

If we imagine Saturn rotating faster, the tension $T$ of this rod will increase, since the centripetal acceleration of $B$ will be higher and more force will be needed to keep $B$ on the surface. If, on the other hand, Saturn stops rotating, then the tension $T$ will disappear and gravity will be the only force that acts on $B$.

We can use Newton's 2nd law to write the centripetal acceleration $a_c$ in terms of the forces of gravity, tension and the mass of a clump.

Using the formula for centripetal acceleration $a_c = \frac{v^2}{r}$ and replacing the tangential velocity $v$ with angular velocity $v=r\omega$ we get:

We rearrange Equation 2 and solve for the force of tension $T_a$ of the clump $A$ located on Saturn's equator:

Similiarly, the force of tension $T_b$ for clump B will be:

From Equation 4 it follows that

In fact, this absolute value of tension gets smaller for clumps that are closer to the poles, since latitude angle $\alpha_{lat}$ gets larger. This means that less tension $T$ is needed to keep clump $B$ on the surface, as planet rotates, and more tension is needed for clump $A$ on the equator. If we use Newton's 3rd law, we can see that clump $B$ pulls less on the imaginary 'rod' that connects it to the axis of rotation. As a result, this 'rod' gets less stretched for clump $B$.

On the other hand, tension $T$ is higher for clump $A$, which stretches its 'rod' more and makes it longer. This increases the length of the radius in the direction of the equator of Saturn and makes the planet fatter along the equator.

Does this explanation make sense?

68
Why is the Earth so fat?
9
rotational oblateness

2
How do centripetal forces and gravity work for objects in a rotating cylinder?
9
rotational oblateness
4
How the apparent weight varies due to the rotational motion of Earth?
5
Shape of a rotating fluid surface
1
Deformation of a self-gravitating sphere from two forces
0
Solar Oblateness: Understanding the force balance formula and solar radius in arcseconds
0
Is gravity the Earth's centripetal acceleration? Should the gravitational acceleration be equal to the centripetal acceleration at the equator?
0
How do I quantitatively explain the effects of the centrifugal force from inertial frame of reference?
3
Is the apparent gravitational force on certain parts of a rotating spherical planet off centre?