How does a hood keep my ears warmer while riding a bike?

This morning I was biking to my university downhill in ~$40^{\circ}F$ temperature. I was wearing a hoodie that resembles the one below (click for larger).

I know that my ears became warmer due to the lessening in air flow directly by it, but my question is how does the hood help limit this air flow? Is it because there can only be so much air in the hood, thus more cannot come in until some has escaped, thus preventing some from entering it in the first place? I know the hood doesn't just make it more aerodynamic in the conventional sense because it catches more air. A diagram of the behavior and reason why I hear the wind less would be appreciated.

I tried looking up a bunch of similar searches but all gave me pages that are unrelated.

Note that there are a lot of reasons "why" the air pocket gets trapped there, like that the air doesn't easily pass through the hood's fabric and that you are moving much slower than the speed of sound so that the air is not easily compressible, so that indeed, nothing can come in without something else going out. But you're sort of asking the question of "given that it gets trapped there, what flow are we talking about here?" So I wanted to answer that.

What likely happens to some extent is that the air passing over your face by the hood openings sets up some standing vortices inside of it. Here's what the turbulent flow looks like before and after: 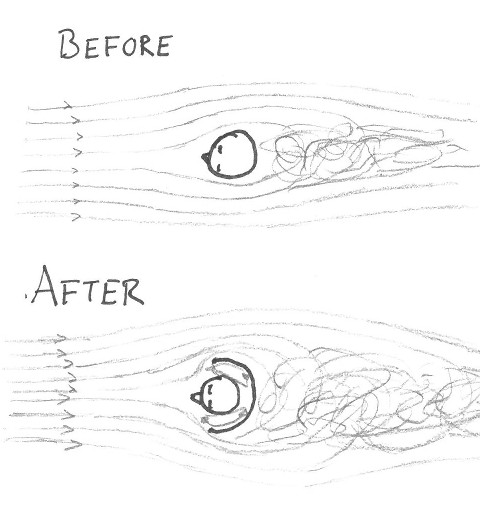 Note that the vortex stream behind you is depicted as getting larger due to the hood, this is the you becoming "less aerodynamic", but also notice that the flow inside your hood gets highly decoupled from the flow of the outside air (the separate streamlines by your ears). Zooming in on that process and using a different color to indicate direction, and focusing on two streamlines that go just barely to either side of your nose, you can see:

What do you see here? First off, a lot of the air that's hitting your ears is getting recycled, which means that it retains a lot more of its humidity (less wind chill!) and heat. Second, you see that indeed air is blowing onto your neck in a way it didn't before. Third, you see that the air that's blowing by your ears is not actually blowing directly into them, but passing over them "the wrong way". What you're not seeing directly is that the air that's inside the hood is only being induced to circulate by a momentum-diffusion tendency of air that we call its "viscosity": therefore the wind speeds inside the hood, while nontrivial, are generally going to be much lower than outside the hood.

(Disclaimer: I no longer remember my fluid mechanics course details well enough to know if these vorticial curlicues of the streamlines are right; in laminar flow I know that streamlines do not cross but in turbulent flow my intuitions generally suck a lot more. I'm mostly trying to focus on the front side of the flow.)

So as a short answer to your question:

there can only be so much air in the hood, thus more cannot come in until some has escaped, thus preventing some from entering it in the first place?

I'm sorry I wrote this answer in a rush (as you could probably tell) I hope you were able to extrapolate the reason for warmer ears when shrouded with your hood.

Not the answer you're looking for? Browse other questions tagged fluid-dynamics everyday-life air aerodynamics flow or ask your own question.

3
Why trimming the mainsail gives a larger torque to head up
5
What is the physics behind Roger Federer's & Rafael Nadal's iconic shots
2
Air resistance of a general shape object
5
Will a tall narrow cup keep a cup coffee warmer than a more evenly dimensioned cup?
6
Why do we hear lesser noise when plastic bags/wrappers are crumpled inside water than when they are crumpled in air?
5
How does train back draft work
0
What energy transformation takes place while riding a bicycle?