Why do coherent states have Poisson number distribution?

Is there a simple and intuitive reason why this fact holds?

$\newcommand{\ket}[1]{\lvert #1 \rangle}\newcommand{\Ket}[1]{\left| #1 \right>} % $Because you can use beamsplitters to split a coherent sate into a tensorial product of many independent low photon number coherent states.

Since the output state is a product state, the statistics of any measurement done at one output is independent from the ones of a measurment perdormed at the other output. Furthermore, the beamsplitter being a passive component, the total number of photon of the input state $\ket{\alpha}$ is the sum of number of photons at the outputs.

Now, you can also add beamsplitters at the outputs, and construct a tree of beam splitters,with $N\gg|\alpha|^2$ balanced outputs, transforming the input coherent state $\ket{α}$ into the product of $N$ coherent states $\Ket{\tfrac{\alpha}{\sqrt{N}}}^{\otimes N}$. As before, the total number of photon is conserved, thus the statistics of the number of photons of $\ket α$ is the sum of the $N$ independent outputs, each having a small average photon number $\tfrac{|\alpha|^2}{N}$. When $N \to \infty$, the only distribution having this property is the Poisson distribution. QED.

Note that, in the reasoning above, the beamsplitters do not need to be actual object splitting beams. Anything that changes the basis of space-time modes does the job. In particular, let your coherent state be in the mode corresponding to a pulse of light. You can also “slice” the pulse into $N$ short time slices. This description is exactly equivalent to the beamsplitter above, and corresponds to the intuition formulated by @AccidentalFourierTransform and @ThomasS above about the independence of successive photon detection events.

In all the descriptions above, I have implicitly assumed that the other port of each beamsplitter is empty, that is receives the vacuum state $\ket0$. This crucial assumption is still present above when I “slice” the coherent state in many timeslices, the initial $N-1$ vacua being in spacetime modes which are orthogonal to the original lightpulse.

While the accepted answer already nicely answers the question, I believe it can be nice to see more explicitly how exactly it is that we get the coefficients (and thus the Poissonian statistics) of a coherent state $\lvert\alpha\rangle$ from the sole requirement that, after a unitary evolution $\mathcal U$, the output state $\mathcal U\lvert\alpha\rangle$ is factorised over the different modes: $$\mathcal U\lvert\alpha\rangle=\bigotimes_k\lvert\psi_k\rangle.$$ Let us consider a generic initial single-mode state $\lvert\psi\rangle$, with coefficients $$\lvert\psi\rangle=\sum_{k=0}^\infty \frac{c_k}{\sqrt{k!}}\lvert k\rangle = \sum_{k=0}^\infty \frac{c_k}{k!}a^{\dagger k}\lvert 0\rangle.$$ Note that the choice of $c_k/\sqrt{k!}$ as coefficients (instead of a simpler $c_k$) is purely conventional (but it will turn out to ease the calculations afterwards). Let us consider a unitary evolution which splits the state into two different modes as follows $$a^\dagger\to r a_1^\dagger + t a_2^\dagger.$$ We could consider the more general case of a splitting into $N>2$ modes, but this will turn out to not be necessary.

1. From properties of destruction operator

So, first you have to accept that $a|n\rangle = \sqrt{n}|n-1\rangle$. This is relatively easy to see because the matrix element for absorption of a photon by a two-level system (atom which goes from ground to excited state) is proportional to $\langle n-1|a|n\rangle$ and this must be proportional to the square root of the number of photons in the light mode because the probability for absorption must be proportional to the light intensity. So you need something like $a|n\rangle = \sqrt{n}|n-1\rangle$ (ignoring a possible phase factor).

There's an alternative picture. You know that a single-mode field is like a harmonic oscillator where the mode's quadrature operators play the role of position and momentum of the HO. Now, a coherent state is a wave packet that oscillates in the parabolic potential without changing its shape. There is no dispersion for this wave packet, it coheres (this is where the name coherent state comes from). The energy eigenstates of the HO (which correspond to the number states of the field mode) are static, they don't move. So, to construct a coherent state, you need to use a superposition of number states. And the weighting of number states in the superposition is the square of the probabilities of the Poisson distribution.

This is also not an intuitive physical explanation but it shines a little bit more light on the problem.

The Poisson distribution is derived statistically from an input of random occurances,

it expresses the probability of a given number of events occurring in a fixed interval of time and/or space if these events occur with a known average rate and independently of the time since the last event.1 The Poisson distribution can also be used for the number of events in other specified intervals such as distance, area or volume.

The Poisson distribution is an appropriate model if the following assumptions are true.

The occurrence of one event does not affect the probability that a second event will occur. That is, events occur independently.

Check, there is no photon-photon interaction, only superposition.

The rate at which events occur is constant. The rate cannot be higher in some intervals and lower in other intervals.

Check, it is the heisenberg uncertainty here.

The probability of an event in an interval is proportional to the length of the interval.

I have question marks where I do not know what a QHO is.

If it checks, then that is the reason Poisson is used. There are two examples for photons in the occurrences list.

Physically the energy spent to create photons is much smaller than the transferred energy in collisions of charged particles. In the zeroth-order approximation one can neglect the influence of the lost energy on the particle scattering and then the particle behavior becomes known at all times. Often it is referred as to a "classical current" $j(t)$. On the other hand, the radiation equation in this approximation is, roughly speaking, linear in the known current $j$: $\square A =j$ and so are the corresponding Fourier components. To be exact, one has to solve the QED equations in this approximation, see formula (24.27) in Akhiezer-Berestetski textbook: 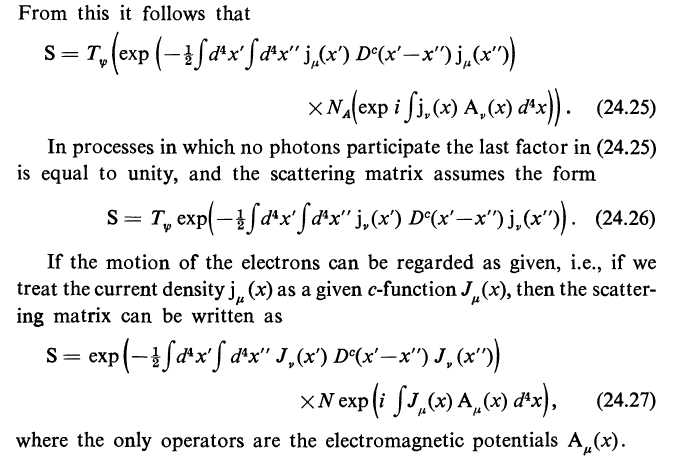 In this approximation the field solution for each harmonics is an eigenstate of the lowering operator $a_{\omega}$. It simply means two things: 1) emitted photons do not hinder/favorise each other while emitting, and 2) there is always enough energy to create any number of photons. In other words, emission of one photon does not influence emission of another one at the same or any other time. Their emission is random. Now statistics of randomly emitted number of photons comes into play and you get the Poisson distribution.

As soon as you fix or limit from above the emitted energy, the Poisson distribution gets spoiled, especially for high frequencies and high photon numbers.

Not the answer you're looking for? Browse other questions tagged quantum-mechanics harmonic-oscillator probability quantum-optics statistics or ask your own question.

5
Why does classical light always result in super-Poissonian statistics?

3
Why uncertainity is minimum for coherent states?
9
Eigenstates of a shifted harmonic oscillator
5
Difference between pure quantum states and coherent quantum states
1
Does every quantum system have coherent states?
0
Do distinct number states of the same wavelength/momentum and same particle type have differing frequencies?
2
Coherent States and their existence
2
Shot noise in optics
1
Why does the number operator gives the number of excitations?
2
In practice, how does one work with the phase states?
2
Why is the classical solution of an harmonic oscillator more like a coherent state than an eigenstate of the Hamiltonian?