The multiverse of eternal inflation

I don't have a clear picture of what is "by definition" the multiverse appearing in the models of eternal inflation. A long time ago I heard that it is a quantum state, but in the cosmology books I have looked into (all treating the subject superficially, may I suspect it's because the object is still not clearly defined?) they define a non spatially homogeneous scalar field on it, entering in the slow-roll inflation regime in some areas, and creating a nucleation this way... So it must also be a manifold, so we can define a coordinate chart on it. Then how many dimensions is it? Because they is also this picture where it solves the landscape problem of string theory and each bubbles becomes a particular vacua of ST (but I am not sure about that neither as I have not read enough of string theory so far). Well to summarize I have a really blurry picture of this mysterious multiverse, so if someone could share his clear definition of it (assuming it exists) I would be really thankful.

ps: is it even a physical object? in the sense obeying itself to some physical laws (which ones?) not like Newton's universe for example? is it dynamical?

The idea is that you start with a spacetime manifold, on which is everywhere defined some scalar field. The scalar field ensures that whole region undergoes inflation. To ensure some sort of stability, the value of the field is chosen to be at a local minimum of the potential - it's not at the global minimum and hence tends to be called a false vacuum. 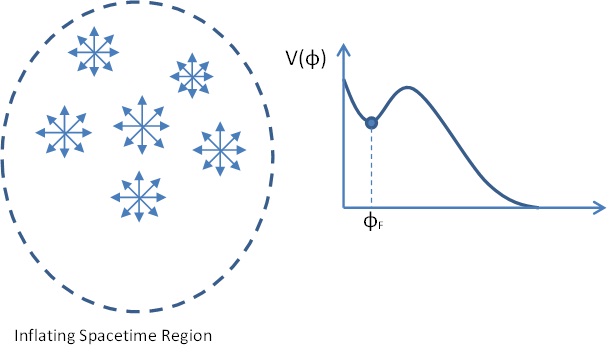 Now, due to some sort of perturbation, or due to quantum mechanical tunneling, the scalar field ends up, at least at some location, having a value at the other side of the potential barrier. One tunneling mechanism is described by the Coleman de Luccia instanton. This point with the new tunneled-to $\phi$ value is thought of as the origination point of a small bubble containing a different phase inside the inflating spacetime. It's sometimes called a nucleation point in analogy with bubble nucleation, in which bubbles form on particles suspended in a liquid.

The potential is now able to roll down the hill and release energy inside the bubble. The bubble wall expands and the bubble contents continue to expand, but at an ever decreasing rate. Anything inside this bubble, i.e. in the forward light cone of the nucleation point has the new $\phi$ value, and hence physics in there sees a different vacuum. The spacetime inside this bubble has a "natural" foliation by 3-dimenional hypersurfaces of constant $\phi$. As $\phi$ decreases, these surfaces become spatially flat, like our observable universe.

These bubbles ("pocket universes") originate in regions where inflation actually ends. So in this soft of model, the orgin of our observed universe, is the end of inflation. Outside of the bubble in question, other bubbles are continually nucleating. Bubbles may even merge. 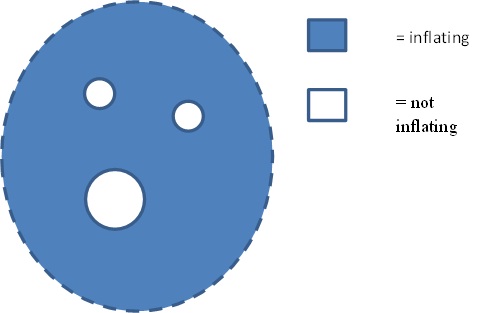 Of course this sort of model is only as good as the predictions it makes for our observable universe. There has been some discussion of the possible observability of bubble nucleation in our past. See here for example.

So, getting back to the question, if you want to attach the term "multiverse" to this scenario, I would assume it refers to the ensemble of pocket universes, embedded in an inflating false vacuum spacetime which, at least in this toy model, obeys the usual laws of GR and quantum mechanics.

It's not a manifold (not a connected one anyway since separate universes can't be (even in principle) arrived at from others). To give a better analogy the "space of all planets" is not a manifold even if you could continuously vary different parameters (the analogs of the scalar fields) continuously. You're correct. If the number of possible backgrounds in string theory (the landscape as it's called) are "real" then they could possibly be other universes in the multiverse just as the number of ways to assemble a bunch of atoms in a huge ball includes Earth, Mars, the Sun, and lot's of black holes if you go larger than a certain mass etc. The scalar field it's self is just represented as a particle (e.g. the dilation) so it should be 11-Dimensional (the particle itself is a (1+1)-dimensional string though of course). The dimensionality of space-time doesn't change in the different backgrounds of string theory. So already there's sort of two kinds of multiverse the "actual" one and the "mathematical" one. The landscape is the mathematical one like the space of possible universes. It does not include all the different arrangements of these universes though so it is not a manifold. The "Actual" multiverse is analogous to the actual distribution of planets and stars. The different values of the scalar field are like different values of the question "is there a planet or star here" in this very crude analogy. Thus the landscape of string theory doesn't obey any physical laws since by definition it's the set of all possible "solutions" to string/M-theroy but the actual multiverse in principle could have such equations but they would probably have to be "beyond string theory" i.e. total speculation at this point.

Not the answer you're looking for? Browse other questions tagged string-theory cosmological-inflation multiverse or ask your own question.