How come the Sun's gravity can hold distant planets in orbit, but cannot rip humans off Earth?

The sun is strong enough to keep gas giants close, but why not people?

The Sun is keeping you close. After all, you are orbiting it just like the Earth. You don't fly off into space because the Earth and you experience the same acceleration due to the Sun's gravitational force, so you orbit together; this is sometimes called the equivalence principle.

If, however, you were floating near Earth but closer to the Sun, you would experience stronger gravity. You would be in a smaller orbit which would make you drift away from the Earth. You wouldn't fall into the Sun, though.

Edit: I forgot to say something about the outer planets, something which the other answers touch on but I think get wrong. First, we should speak of acceleration rather than force, because like I said earlier all objects at a given distance from the Sun experience different forces but the same acceleration.

You ask "how come the Sun is strong enough to keep the distant planets in orbit but I don't fall into it?". The important point is that you don't need such a huge acceleration to keep the planets in orbit, because they are far away and move very slowly.

But, the smallness of the acceleration isn't the reason you don't feel it. The reason is that you're in free fall around the Sun; even if you were zipping around kilometers from the Sun's surface, you would not feel the huge gravitational force, because it affects everything around you in exactly the same way (disregarding tidal effects).

First of all, planets are much, much more massive than you are and so the sun's gravity exerts a much larger force on the planets than it does on you.

Secondly (and more importantly) you are much closer to the Earth than you are to the sun. Gravity follows what's called an inverse square law which in simple terms means that if you double the distance between the two objects, the strength of the force gets 4 times weaker (because 2 squared is 4). If you triple the distance, the force gets 9 times weaker. 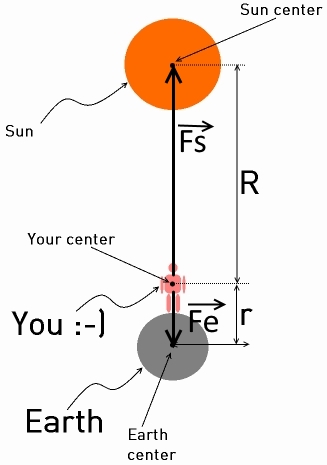 If we find the ration between Earth’s down force and the sun’s up force, we get

So, Earth is pulling you down with a force about 1600 times bigger than the sun. That’s why the sun cannot rip you off the earth.

For the planets no matter how big the force between them and the sun is, they would still be trapped (actually you, me and the whole earth too) since there is no other force pulling them away from the sun just like the Earth acted opposing sun’s gravity on you (forget the other stars and the whole universe, ok).

The force of gravity is generated between all objects in our universe. you can calculate that force using this equation:

and $r$ is the distance between the objects (in meters).

So earth is actually pulling you harder.

Not the answer you're looking for? Browse other questions tagged newtonian-mechanics newtonian-gravity orbital-motion sun tidal-effect or ask your own question.

5
Why doesn't the Earth release you as soon as you escape it?
0
Why the Moon does not change its orbit from Earth to an another planet?