I have seen simulations of antimatter on TV. Has antimatter ever been photographed?

The total amount of antimatter ever created on earth is not even sufficient to be visible by eye, so it is hard to answer.

However, if a bunch of antimatter was available as stable solid or liquid material, there is no reason to think it would look different. Indeed, its interaction with visible light is pretty much exactly the same as usual matter, so it would look the same.

Update: As comments explain, the looks of a piece of antimatter would be the same of its matter counterpart. Thus it might have any colour, texture, shine, etc.

Antimatter looks just like matter. Experimentally, there is no difference between the spectral lines of antihydrogen and of ordinary hydrogen. Same emission spectrum.

The photon is its own antiparticle. It interacts in the same way with matter as with antimatter.

Due to the kaon having interacted with a proton in the hydrogen, the rightmost beam track produces a spray of 4 tracks. The longer highlighted track is clearly dark – it has produced a higher number of bubbles per centimetre than, say, the beam tracks; this tells us that it is moving more slowly. (For details, click here.) Such tracks are a common feature in bubble chamber pictures and usually signify protons.

The dark lines in this picture are produced by charged particles as they force their way through liquid deuterium.

In the top left corner of the picture, this antiproton annihilates with a proton constituent of a deuteron, producing a 6-pronged annihilation 'star’. (If it had struck a neutron, the number of prongs would, by charge conservation, have to be odd.)

What distinguishes a proton from an antiproton in the bubble chambers to start with is the charge. An antiproton can release a lot of energy which the proton cannot.

Edit after observation in the comments that these tracks are like footprints, and not photographs of the particles.

What is a photograph? It is a permanent registration of shape in two dimensions by the interaction of scattered photons with the film.

The tracks above are much more than footprints, they are consecutive molds of the shape and mass of the passing particle ( that is why we know it is a proton by mass, the ionization dependence tells so). They are the interaction by photon exchanges of the passing particle. Microscopically each delta(x) of the track is a photo of the particle and the film is the hydrogen of the chamber, which is then photographed. So it is a photo of a photo.

Carl David Anderson got a Nobel prize for taking a photograph of a positron:

(Source: The Positive Electron, by C.D. Anderson). Remark: the image is a photograph of the path of the positron, as seen in a cloud chamber.

For the sake of comparison, the track as of an electron, the antiparticle of the positron, is 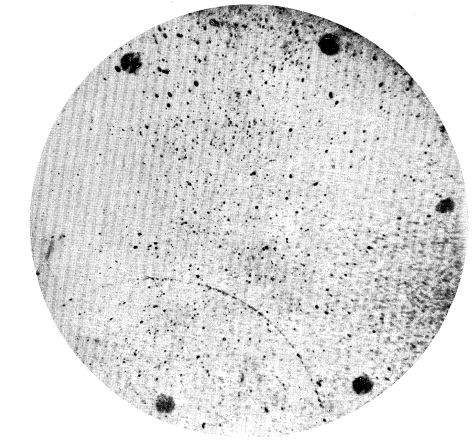 I recommend to check out Anderson's article if you are interested in the photographs of the track of different particles, suchas $\alpha$ particles: 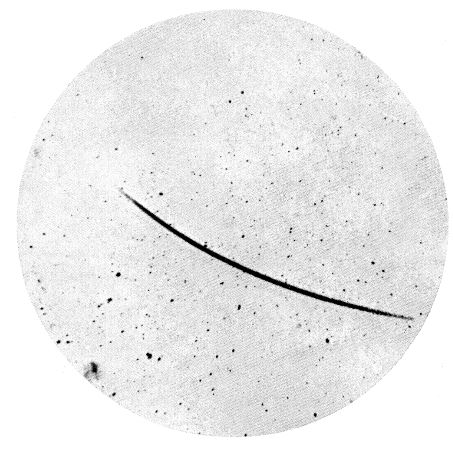 In any case, the general message is clear: particles and antiparticles leave the same track, except for the sign of their curvature (which is determined by the electric charge).

Antimatter-antimatter interaction is, to the best of our knowledge of physics, chemically identical to matter-matter interactions. Any symmetry breaking is so small that it would have no observable effects at human scales.

Its interaction with photons is also identical.

The only important way it interacts differently is the matter-antimatter reaction, where it annihilates and releases a large amount of energy.

So the short answer is, it looks like matter. But it only looks like a matter if it is completely isolated from matter.

Doing so is very hard.

The speed of sound in space is about 100 km/s. This is roughly how fast the atoms in the interstellar medium are traveling.

So a 1 kg cube of anti-gold glows with the heat of 0.15 Watts in a hard vacuum. In near-Earth space, it would be a few times brighter due to the solar wind.

So a block of anti-gold floating in space would look mostly like gold. At least until you disturbed it with the residue of your rocket thrusters.

According to a very recent experiment, it looks exactly the same as normal matter (or, at least, they interact with the light spectrum in the same manner).

Not the answer you're looking for? Browse other questions tagged particle-physics antimatter or ask your own question.

101
What is the speed of sound in space?
-1
Direct measurement of the mass, charge and spin etc of the particles produced in colliders

3
Have there been attempts to create heavier antimatter particles?
32
Has the gravitational interaction of antimatter ever been examined experimentally?
4
What is antimatter?
4
Questions about the strange character of antimatter
1
What is the Current Status of Measurement of the Gravitational Mass of Antimatter?
1
Matter v antimatter
2
Do matter and antimatter undergo relativistic effects identically?