According to a lecture I'm looking at from my university, the light should emerge linearly polarized. Unfortunately, there is no explanation as to why (I would expect it to be still circularly polarized) or how the intensity is changed (if at all).

I suspect it has something to do with the shift that occurs when the light passes through the plate, but I'm not sure. Note that this is all in the context of monochromatic waves.

A waveplate is a birefringent crystal. Birefringence is a particular kind of anisotropy where the refractive index depends on the plane of polarization of the light: there are two, orthogonal linear polarization planes which have a relatively lower ("fast axis") and higher ("slow axis") refractive index. An waveplate of angle $\phi$ is of such a thickness that the phase delay differs for these two polarization states by $\phi$ as light passes through the crystal.

Therefore, the way to analyze the action of such a crystal is to translate the above into equations. We represent a general polarization state by a $2\times2$ vector:

where $\alpha,\,\beta,\,\delta,\,\epsilon$ encode the magnitude and phase of the component of the electric field vector along the fast and slow axes.

undergoes uniform circular motion and that this is therefore circular polarization.

If such a state is input to a quarter wave plate, then the plate imparts a further $\pi/2$ phase delay between the states. So now our state becomes

and the fast and slow components are now either in or exactly out of phase. It's not hard to see that the head of this vector undergoes simple harmonic rectillinear motion, and that therefore we're now dealing with linear polarization.

Circularly polarised light can be thought of as being produced by two simple harmonic motions of the same frequency and amplitude oscillating at right angles to one another with a phase difference of $90^\circ$.

There is a nice simulation of the addition of two shms to be found at this website.

The simulation of the addition of shms with a phase difference of $90^\circ$ yields: 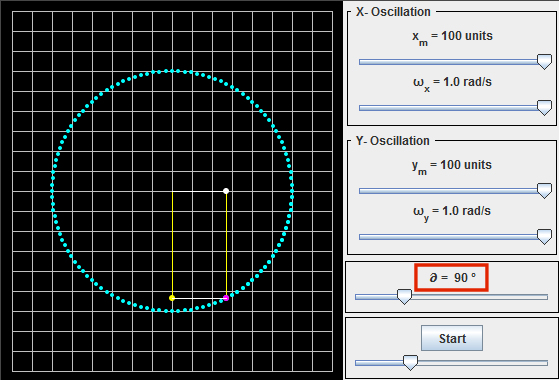 Not the answer you're looking for? Browse other questions tagged waves polarization or ask your own question.

0
How does a quarter wave plate convert linear light to circular light?