I do not understand why you have to include the holes for semiconductors and not for conductors. Yes, I have seen in other places that metals do not have holes because their valence and conduction bonds are usually indistinct from each other, whereas holes are left in the valence band when electrons move into the conduction band in semiconductors. But what if I don't want to think of conduction in terms of band theory, but classically?

In the sea of electrons model, an area that is vacated by an electron acquires a positive charge relative to its previous, electron-filled state. Thus, as an electron moves through a conductive wire, it is as though a positive hole is moving through the other way, and so we could consider current as being a flow of positive charges instead of a negative one. Serway's College Physics provides this diagram: 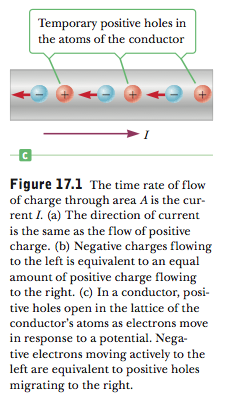 Thus, I fail to distinguish between the presence of holes in conductors and semiconductors. Whenever you have an electron moving, a hole is created in its absence, regardless of what that material is. So why is that you have to consider holes in semiconductors and not in metals?

Atoms are really distinguished from each other due to their nuclear properties . It is the number of protons in the nucleus that defines the electric potential which will trap electrons and create a neutral atom. Thus metals have a specific type of nucleus that generates the potential which gives rise to loosely bound electrons in the outer shells. It is a complicated interplay between the potentials of electrons and protons that generates the electron shells described by the quantum numbers.

So it is a many body interaction that will keep electrons mobile in metals, and the positive "holes" immobile at the location of each atom.

In a conductor, electric current can flow freely, in an insulator it cannot. Metals such as copper typify conductors, while most non-metallic solids are said to be good insulators, having extremely high resistance to the flow of charge through them. "Conductor" implies that the outer electrons of the atoms are loosely bound and free to move through the material. Most atoms hold on to their electrons tightly and are insulators. In copper, the valence electrons are essentially free and strongly repel each other. Any external influence which moves one of them will cause a repulsion of other electrons which propagates, "domino fashion" through the conductor.

In semiconducting materials there is small mobility of both electrons and the holes left behind, again because of the potential solutions of the many body problem:

A silicon crystal is different from an insulator because at any temperature above absolute zero temperature, there is a finite probability that an electron in the lattice will be knocked loose from its position, leaving behind an electron deficiency called a "hole".

If a voltage is applied, then both the electron and the hole can contribute to a small current flow.

The conductivity of a semiconductor can be modeled in terms of the band theory of solids.

Edit looking at your figure: It is not talking of motion of physical positive charges, holes, but of hypothetical ones. In a semiconductor, the holes move, i.e.a neutral atoms become positively charged sequentially. In metals , the positive charge is attached to the individual atom, generating the potential that gives the energy levels. For holes to move, atoms at the atomic level have to exchange electrons. In metals the electrons are shared by all atoms and the mobility of holes is zero

so $$i_n=i_e+i_b=i_e+i_h$$ where $i_n$ is net current and $i_b$ is current due to bound electrons. In conductor we consider only motion of free electrons flowing. 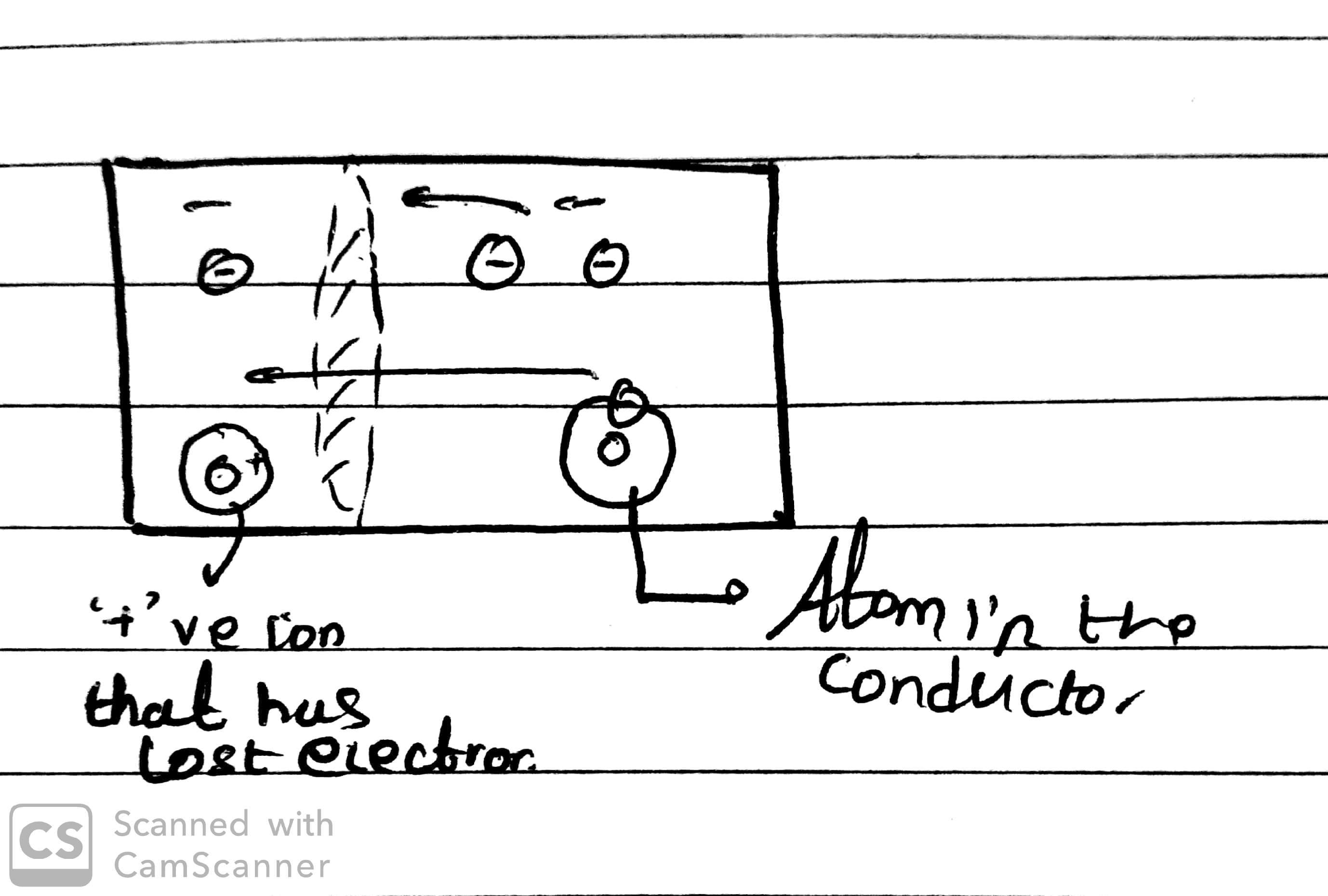 This is because mobility of bound electrons(i.e. holes) is very less and there are many free electron (although equal to number of holes or else wire would not be neutral) whose mobility is very much high than holes.Due to this contribution of holes is very small compared to current due to electrons(i.e. very high number of electron pass through cross-section of conductor as compared to number of holes).That's why we do not consider holes in conductor.

In semiconductors, the electrons that conduct currents are near the band edge. There, the dispersion law is usually parabolic (dispersion law is the relationship between particle energy and momentum). That is the same as one for a classical particle, which allows to think of electrons and holes as classical charged particles.

In metals, the electrons that conduct are somewhere in the middle of a band. The dispersion law is not parabolic there. So, the electrons behave in a much more weird ways, and one cannot treat them as classical particles. Attempts to separate them into electrons and holes make no sense. For example, if you use hall effect to determine what is the sign of carriers, you'll end up with different answers for different metals. it.stlawu.edu/~koon/HallTable.html

Not the answer you're looking for? Browse other questions tagged electromagnetism electric-current semiconductor-physics conductors or ask your own question.

11
Why there is no hole in Sommerfeld's model of free electrons?
0
Why are there electron and hole currents in semiconductor, but only electron current in metal?