Physical principle behind the suction of a piston

I'm sorry if the question is trivial but for me it is not. I'm wondering what's the principle behind the suction process in a piston pump or in a piston of an internal combustion engine. I mean when the piston goes down, pressure inside lowers and air/water enters. Is it the conservation of momentum? 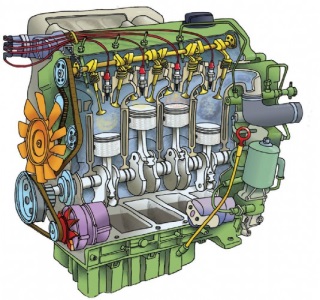 This is possibly an engineering question but the physics parts are:

The conservation of momentum law means two things, the first obvious thing is that momentum must be conserved, so that principle contributes to the motion of each individual piston as well as the ones they are linked to. Once you push the piston down, the crankshaft's degree of freedom to rotate will make it go back up again, as it depends on enough momentum to make the return stroke and help the power stroke of another piston.

The other thing might also seem obvious, but the conservation of momentum is our way of explaining why the engine does not just suddenly stop. I don't mean through mechanical causes, I mean in the same way as we expect the Earth to keep going around the Sun. That's a big deal in physics, as it helps sort out why we will never build a perpetual motion engine.

Depending on which of the down strokes you choose, as the piston descends, it compresses all the air beneath it. simultaneously, the camshaft is timed to open the gas inlet valve, and the fuel pump injects the fuel/air mixture into a very low pressure area, where it expands. Again, the crankshaft acts to utilise the energy/momentum from the other pistons. As the pressure is very low above the piston, it vaporises and gives an efficient even burn.

BTW, you absolutely don't want water getting in, because it won't compress as a gas would, instead it may lift the head off of the engine block, or blow a head gasket.

So to answer your question, it is a combination of conservation of momentum, the linking together of 4 pistons and the pressure difference above and below the piston in it's cylinder that create engine power.

Thanks for your answer which solve some of my doubts but I still don't get how vacuum is "created" if vacuum is the absence of matter.

Think of a bike pump. Push the handle slowly down all the way, so the plunger is at the base and all the air is pushed out. Put a cloth over the hole where the air is sucked in and hold it tight against the base.

Now pull the handle halfway up, which will take some effort. Let the handle go and you will see it move by itself back down. (Forget the spring inside for a minute, it only works at the full extention of the handle.). The air inside the tube above the piston, even though there is very little of it, has been compressed and will move the handle move down, as there is nothing to stop it.

Switching to the car engine, rather than thinking of a complete vacuum, which is impossible to achieve, think of the little bit of air being so compressed inside the cyclinder, it immediately has to expand and there is nothing to stop it doing so. Because the pistons are linked by the crankshaft, one piston can "help" another one move, (but you probably know all this bit already)

So I have mislead you slightly (sorry) in thinking about air/fuel mixture, it is forced in by the injectors, and the downward action of the piston sucks it in as well, and then has nothing to stop it expanding inside the cylinder, ready for the up stroke which follows and ignites the mixture

I assume this question is about devices like piston pumps, that pump for example water, rather than combustion engines. And in that regard it seems to inquire only about the "suction" part of the process.

There is nothing like suction in physics. The appearance of it originates in the pressure difference between the opening piston and the environment. The empty piston, which is gaining volume during this process must compensate for this in changing either pressure or temperature according to p * V / T = const. In this case there can't be any temperature change, which means that for the volumne increase there must be a pressure decrease. Through the open valve the agent to be pumped will respond by entering the piston to establish an even pressure distribution. I think the first law of thermodynamics should explain that https://en.wikipedia.org/wiki/First_law_of_thermodynamics

The volume interacts with the container by bouncing the particles off the walls of the container. The transfer of momentum on each collision is felt like pressure on the walls.

When a wall moves (like in a piston) increasing the volume the velocity distribution changes due to a lowering of temperature. Since all the speeds are deduced the pressure drops (lower momentum transfer in each collision).

Unfortunately my knowledge stops here as I don't know why volume changes affect the temperature distribution as a matter of first principles. Someone who knows more about the kinetic theory of gasses please chime in here!

The movement of a piston "sucks" by producing a lower pressure $P_i$ on the inside (close to the piston) than the pressure in the environment of the liquid/gas $P_o$. Thus a force $F=(P_o-P_i)A$ where A is the area of the piston is exerted. There is no suction if the outer pressure is lower than the inner pressure. A good example is the suction pump fountain which only works down to a depth of about $10m$ because for larger depths the hydrostatic pressure of the water column exceeds the atmospheric pressure.

Note regarding question in later comment on internal pressure.

The problem of the internal pressure $P_i$ is, in its general form, rather complex. The easiest way to get a grasp of what happens is to consider the problem in a linearized way with a small piston displacement and thus small pressure changes $p=P_i-P_{i0}$. Then you can see that the piston displacement causes a longitudinal sound wave (displacement and pressure) propagating with sound velocity $v=\sqrt{\frac{K}{\rho}}$ ($K$ is the adiabatic compression module, $\rho$ is the density) away from the piston, causing a time delayed displacement of the gas/liquid in the direction of the piston. When the piston movement is so fast that there is no reflection of this longitudinal wave from the other end of the pipe yet, then the pressure change $p$ at the piston is related to the volume flow by $$p=-UZ_0=-uAZ_0$$ where $u$ is the positive displacement speed (at the piston) and $Z_0=\frac{\rho v}{A}$ is the characteristic acoustic impedance of the pipe, with $A$ being the pipe cross section. Thus, in this approximation, you can relate the pressure drop at the piston to the speed of its displacement.

1
Bernoulli Equation Paradox
2
Is this a case of the "venturi effect"? What's behind the "Venturi effect" actually?
3
Effect of initial suction power on siphon performance
0
Is there such a thing as a pressure pixel?
0
Calculating the power of a pneumatic piston vibrator
1
Would it take an equal amount of lb-force as the total water weight weighing down on the piston to be at equilibrium? Pascals principle
1
If shaking a soda bottle does not increase the air pressure inside, what causes soda to come out if I poke a hole?
1
What would the water pressure be at this point in a static incompressible fluid?
0
Why don't we circulate system air to compressor for cooling?