Ground state degeneracy of a variation of Toric Code model

We know that the ground state degeneracy of Toric Code model is 4. An easy way of seeing this is the following:

To see the ground state degeneracy, we notice that $\prod_vA_v=1$ and $\prod_pB_p=1$, being two constraints on the $A_v$ and $B_p$'s. Thus different $A_v$ and $B_p$'s can now only label $2^{2N}/4$ different configurations ($N$ being the total vertex number) because of the 2 constraints. But the total Hilbert space is still $2^{2N}$-dimensional, thus on average each configuration has a 4-fold degeneracy.

Note that after adding the third term, the Hamiltonian is still a sum of commuting projectors, thus the counting method should still work; I'm just having trouble counting the number of constraints.

My guess is that after adding the $C$ term, the ground state degeneracy reduces to 2. Anyone can prove/disprove me?

I think it would be easier to prove it using the loop algebra method developed in this work [Y.-Z. You and X.-G. Wen, arXiv:1204.0113] (which you may have already known). Admittedly, the constraint-counting method you mentioned is more rigorous, and is successful for the original toric code model. However for your case with $H_C$ term, after thinking for a while, I could not figure out how to count the constraints either.

Here is how the loop algebra works. 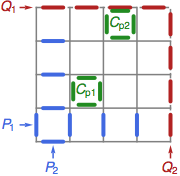 Not the answer you're looking for? Browse other questions tagged condensed-matter quantum-computer or ask your own question.

2
How large is the ground state degeneracy of additive quantum codes?