Wave nature of matter in bonds

We say that electrons are probability waves. Then if two or more elements form bonds by overlapping of orbitals then what happens to the wave function of the electrons? Is it possible that during bonding, these electrons still behave as waves and interfere?

We say that electrons are probability waves.

It's more accurate to say that with electrons are associated wave functions $\Psi(r)$ that contain all information we can know about the electron. The modulus squared $|\Psi(r)|^2$ of the wave function (assuming it has been normalised) represents the probability density of the electron.

In atoms, electrons occupy atomic orbitals (AOs), each with a set of quantum numbers $n,l,m_{\ell}$. Orbitals can accomodate a maxiumum of $2$ electrons, which in accordance with the Pauli Exclusion Principle must have different quantum spin numbers $m_s$ (one with $m_s=+\frac12$, the other with $m_s=-\frac12$ or vice versa).

$2$ electron orbitals can also be obtained by the linear combonation of two half-filled AOs of separate atoms, forming a so-called molecular orbital (MO), also known as a chemical bond. The idea is crudely schematised below for the formation of the famous dihydrogen $\mathrm{H_2}$ $\sigma$ ("sigma") MO: 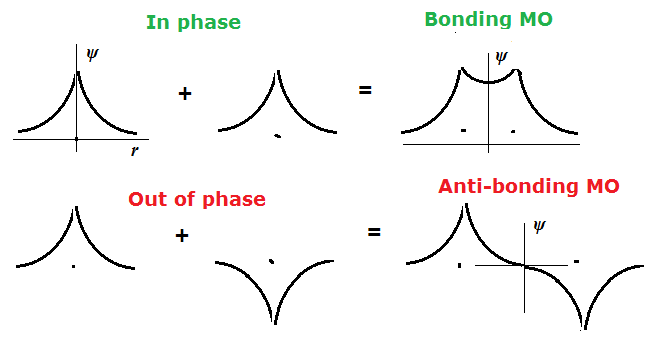 In the top part, two $\mathrm{1s}$ hydrogen wave functions of the same sign ("in phase") form a linear combination in the shape of a bonding $\sigma$ MO.

In the lower part, two $\mathrm{1s}$ hydrogen wave functions of the opposite sign ("out of phase") form a linear combination in the shape of a anti-bonding $\sigma^*$ MO. An anti-bonding MO does not provide a bond because the wave function is essentially zero between the two nuclei.

Nice representations of the bonding $\sigma$ can also be found here and of the anti-bonding $\sigma^*$, here. The colours represent the sign of the $\mathrm{1s}$ AOs involved.

Other linear combinations of AOs are also possible, e.g.:

As with a filled AO, filled MOs contain only $2$ electrons, with different $m_s$-values.

As with AOs, for MOs the value of $|\Psi|^2$ represents the probability density, in chemistry often referred to as the electron density.

Is it possible that during bonding, these electrons still behave as waves and interfere?

Of course. This has been confirmed experimentally.

The unequivocal experimental proof of the wave (frequency) nature of matter is the electron image recorded in 2007. This image was recorded by a team of Swedish scientists from the University of Lund. The image turned out to be a soliton image.

If we look at the video frame by frame, we will see interfering waves from others electrons (from the upper and lower sides).

Not the answer you're looking for? Browse other questions tagged wavefunction wave-particle-duality quantum-chemistry or ask your own question.

14
Why do covalent bonds form?
6
The Dual Nature of Matter
1
Why complex functions for explaining wave particle duality?
1
Bond Formation during reaction
5
Relation between Wave equation of light and photon wave function?
1
Molecular orbital theory
0
Wave packet and group velocity?
21
Is it wrong to say that an electron can be a wave?
0
Dual nature of matter and radiation