Why magnetic monopole has't been shown in the particle physics's Standard Model context?

For various reasons, experts, since Dirac, believe that a unified field theory must have a magnetic monopole. For example, Polyakov said: "I am quite certain that magnetic monopoles really exist. How, when and if they will be found is another matter."

Strangely, thinking that so many elementary particles in the Standard Model, we don't have any particle carry any U(1) magnetic monopole charge --- which should exist for a compact Abelian U(1) gauge theory. For examples, quarks and leptons, they can carry various charges of the electric U(1)$_{em}$ and the weak charge SU(2)$_{weak}$; and the quarks also carry the strong charge, the SU(3)$_{strong}$ colors. Again, we still don't have any elementary particles carrying the U(1) magnetic monopole charge.

For a theoretical purpose, is it possible to have an elementary particle like quarks and leptons in the Standard Model attached a U(1) magnetic monopole?

If yes, how could we make the Standard Model becomes consistent under the U(1) magnetic monopole attached to some known quarks or leptons?

If no, is that the no-go reason due to (1) the fact of the gauge-gravity anomaly-cancelation in Standard model, such as a simple version of the Green–Schwarz mechanism for the Standard model? Or, is the no-go that due to the fact that the U(1) magnetic monopole is actually a topological charge, so it cannot be locally gauge-invariant, and it can not be created by a local operator? Or something else?

The known anomaly cancellation for the Standard model is described in Peskin and Schroeder Chap 20.2: 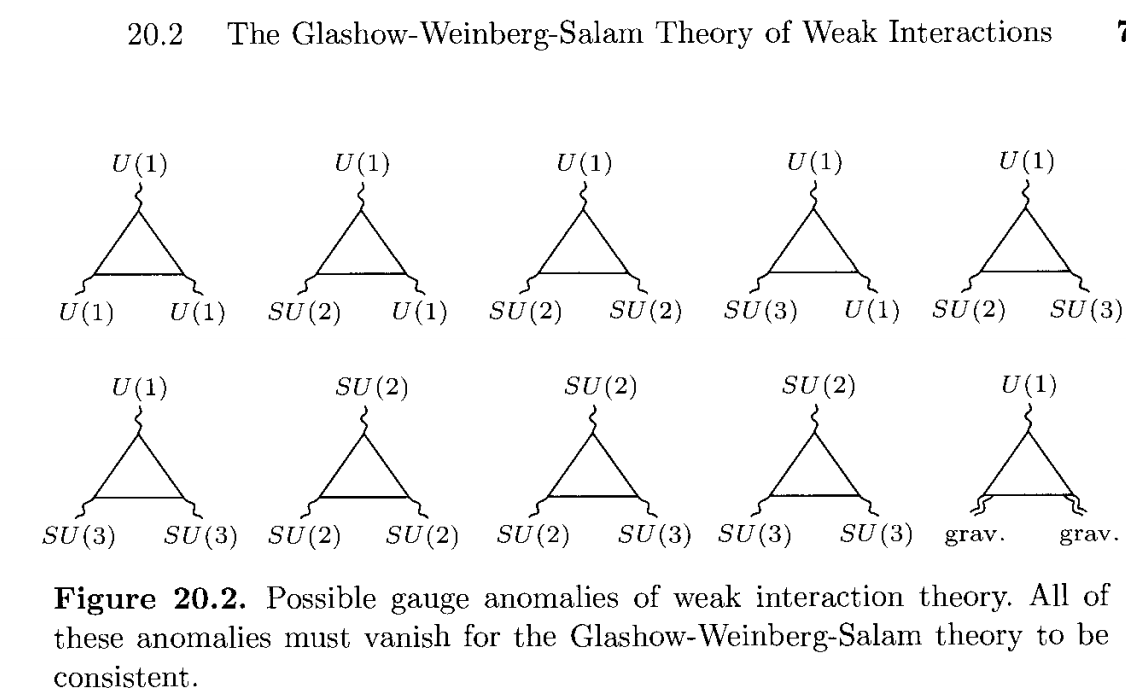 The standard model is usually formulated as a gauge theory with a Lagrangian that contains the gauge fields. Let us say, for simplicity, that we consider an Abelian gauge theory, which means that the gauge group is $U(1)$.

Then you have an electric and a magnetic field, but as you know these are described with the photon field $A_\mu$. In terms of the electric and magnetic fields, $A_\mu$ corresponds to the potentials. In particular, the spatial part of $A_\mu$ is the vector $\vec{A}$ defined by $\vec{B} = \vec{\nabla} \wedge \vec{A}$. But note that this definition depends crucially on the fact that $\vec{\nabla} \cdot \vec{B} = 0$.

As a final note, I should give a hint of how a magnetic monopole would be included in the formalism. Basically, it would reduce to a non-trivial boundary condition for the gauge field. More precisely, if you want to describe a magnetic monopole that sits at point $x$, then remove a little sphere around $x$ from the space-time and prescribe appropriate boundary conditions for the field $A_\mu$ on this sphere. This way, the monopole is not really in space-time and the contradiction that I described above disappears.

No elementary particle (in the sense of a particle that is the quantum of an elementary quantum field) may carry a "magnetic charge". The presence of a field "magnetically charged" under the $\mathrm{U}(1)$ is simply incompatible with the $\mathrm{d}F = 0$ Bianchi identity, which would be modified to $\mathrm{d} F = j_m$ for $j_m$ the magnetic 3-current. This means that a theory with magnetically charged elementary fields cannot be a simple $\mathrm{U}(1)$ gauge theory. I discuss several alternative ways of including magnetic charges into a $\mathfrak{U}(1)\cong \mathbb{R}$ theory here in slightly more detail.

The non-existence of monopoles in the Standard Model has nothing to do with anomalies or anomaly cancellation. The no-go theorem for topological monopoles in the standard (Glashow-Weinberg-Salam) theory of electroweak interaction is that four-dimensional 't Hooft-Polyakov monopoles of a gauge group $G$ broken to a subgroup $H$ require non-trivial $\pi_2(G/H)$ of the vacuum manifold $G/H$. If $G$ is simply and doubly connected, i.e. $\pi_1(G) = \pi_2(G) = 0$, then this is the same as requiring non-trivial $\pi_1(H)$ from the long exact sequence of homotopy groups applied to the fibration $H \to G \to G/H$. But in the GWS theory, the electromagnetic $H = \mathrm{U}(1)$ is usually dense in the torus $\mathrm{U}(1)\times\mathrm{U}(1)\subset \mathrm{SU}(2)\times\mathrm{U}(1)$ for generic (i.e. irrational) values of the Weinberg angle, cf. the answers by Qmechanic here and here, effectively becoming a non-compact $\mathrm{U}(1)$ - the embedding map is not continuous on the level of Lie groups.

Note that this only excludes 't Hooft-Polyakov monopoles. It does not exclude other topological monopoles that could arise from non-trivial topology of spacetime itself, like the standard example of a $\mathrm{U}(1)$ monopole sitting at the origin of a $(\mathbb{R}^3/\{0\})\times \mathbb{R}$, see, for instance, this question and answer.

Not the answer you're looking for? Browse other questions tagged quantum-field-theory string-theory standard-model magnetic-monopoles grand-unification or ask your own question.

18
How does Inflation solve the Magnetic Monopole problem?
5
Quarks as preons for the whole standard model
19
What's the deepest reason why QCD bound states have integer charge?
53
Symmetries of the Standard Model: exact, anomalous, spontaneously broken
5
Distinction of Dirac monopole and Polyakov-'t Hooft monopole
1
Fundamental Interactions in the Standard Model