Can forces be predicted?

The exhibit demonstrated that there was no way to predict the movement of the 3rd set of spokes due to the complexity of forces applied. (i think)

Can anyone tell me what this theory is called or this is indeed a thing? 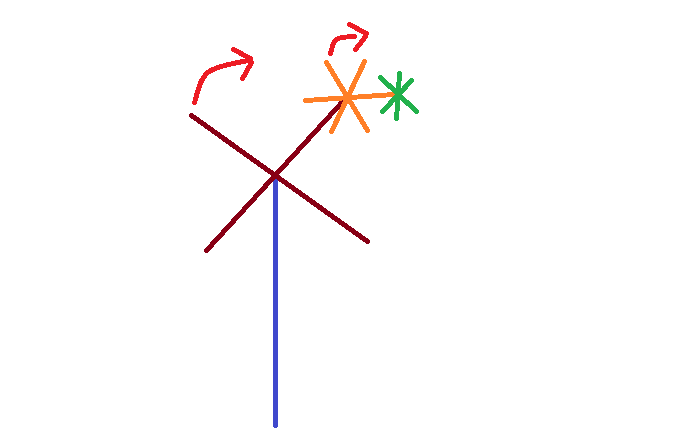 The experiment was most likely alluding to the butterfly effect, i.e., that a system’s dynamical behaviour is very sensitive to initial conditions. The eponymous example is that whether a butterfly flaps its wings or not can eventually change whether a tornado happens or not. This sensitivity to initial conditions is a defining feature of chaos and addressed by chaos theory, but there are other, less surprising situations where such a behaviour can be observed (e.g., explosions).

One of the most simple systems that exhibit the butterfly effect is the bit-shift map, which takes a number between 0 and 1 and removes the first digit after the decimal point¹, i.e., 0.1011011 gets mapped to 0.011011, which in turn gets mapped to 0.11011. Imagine that repeatedly applying this map would correspond to evolving physical system in time by a few seconds and you would like to predict the behaviour of this system. In a real situation you can only measure your first number to a given accuracy, i.e., a given number of digits after the comma. As soon as the digits known to you got removed by the tent map, you cannot predict the dynamics anymore, simply because your inaccuracy of measurement. Note that this system’s state is described by one real number.

A slightly more complicated, but more realistic example is the double pendulum. No matter how well you try to reproduce the same initial conditions, you will not be able to predict basic aspects of its behaviour (e.g., the number of flips). Nonetheless we can write down the equations of motion, simulate them on a computer and still see that a tiny change of the initial conditions suffices to change its behaviour. This system’s state is described by four real numbers.

What the above examples hopefully demonstrate is that it’s not complexity that gives rise to the butterfly effect. We understand these systems; we know what we would need to predict them and why it’s impossible to obtain this information; we know why the butterfly effect happens. Also, they are not very complex or have many variables to keep track of.

Instead, a central feature of those systems and a necessary condition for chaos is non-linearity. Now, a lot of physics approximates systems to be isolated and linear (which is useful since it allows us to understand, predict on a short time scale, and make statements about the general behaviour of a system). However, all real systems are non-linear. If not due to inherent non-linearities, then due interactions with other, non-linear systems – at the end of the day, there is only one system (the universe).

A similar argument applies to chaos, and thus we have the butterfly effect everywhere. So, yes; it is indeed a thing. A classical example is the difficulty of weather prediction. The only question is on which time scale it affects something.

Finally, it should be noted that, while we cannot predict the precise movement of such a system, we can still predict the general behaviour. For example, while it’s impossible to predict when exactly my heart is going to beat in a few minutes, I can with quite some certainty predict that it will still be beating.

¹ In binary. If you do not know binary, the example works as well with “regular” numbers; the map is just a bit more complicated or the problem is not illustrated that well.

Not the answer you're looking for? Browse other questions tagged newtonian-mechanics forces newtonian-gravity determinism chaos-theory or ask your own question.

2
What is the definition of “Complexity” in physics? Is it quantifiable?

3
Why doesn't phase space contain acceleration/forces?
1
A broader view on contact forces
32
Material that untangles itself when a current is applied?
3
How to teach modeling physical systems?
1
Definition of “tidal forces”
2
Why does Friction act Parallel to the Surface (Microscopic Level)?
0
Can a perfectly symmetrical round bead dropped into a perfectly level Galton Board indefinitely balance on a peg?
0
*All* forces in stacked objects on ground