How did Halley calculate the distance to the Sun by measuring the transit of Venus?

What numbers did Halley, Cook, et al. have? What was the strategy by which they calculated the AU?

Halley's method requires one to measure the timing of the beginning of the transit and the end of the transit; both pieces of data have to be measured at two places of the Earth's globe whose locations must be known. 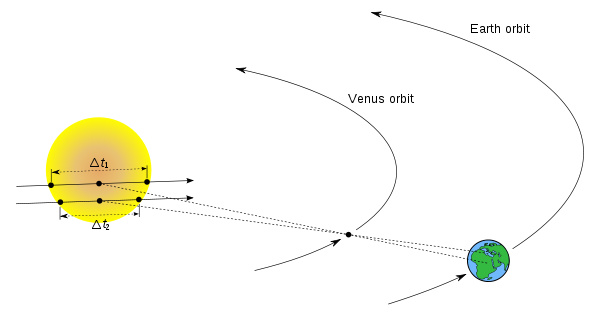 The picture by Vermeer, Duckysmokton, Ilia shows that the two places on Earth have differing locations in two different directions (the differences in the distance from the Sun and Venus are too small to be measurable): one of them is parallel to the direction of the transit of Venus and will be reflected in the overall shift of the timing; the other component is transverse to it and it will actually shift the line along which Venus moves and crosses the Sun in the up/down direction i.e. it will make the duration of the transit longer.

The calculation of the parallax from $\Delta t_1$ and $\Delta t_2$ and their difference is a simple exercise in geometry but I want to avoid trigonometric functions here.

At any rate, Halley didn't live to see a proper measurement (the transit occurs about twice a century and the two events are clumped together with a 8-year break in between). The best he could get was 45 angular seconds for the parallax; the right answer is about 8.8 seconds. He knew that his result was very inaccurate. Note that the solar parallax is the angle at which the Earth's radius is seen from the Sun, i.e. the difference in the rays needed to observe the Sun from the Earth's center and/or a point on the Earth disk's surface.

Some orders-of-magnitude estimates for the numbers. Venus orbits at 0.7 AU so it's actually closer to the Earth than it is to the Sun during the transit. It means that a shift by 6,000 km up/down on the Earth's side corresponds to about 12,000 km up/down on the Sun's side. So the two horizontal lines crossing the Sun on the picture (places on the solar surface where Venus gets "projected") may be separated by about 12,000 km. Compare it with the solar radius near 700,000 km: you may see that we're shifting the horizontal lines by about 1% of the Sun's radius and the relative difference between $\Delta t_1$ and $\Delta t_2$ will be comparable to 1%, too. The last transit in 2004 took about 6 hours so the difference in the duration at various places is of order 10 minutes.

The 2012 transit of Venus on Tuesday night UTC will take over 6 hours, too; the timing and duration differs by about 7 minutes depending on the location, too.

If you've been dreaming about observing the transit of Venus, don't forget about Tuesday 22:49 night UTC; the following transits will occur in 2117 and 2125. There is a blog version of this answer, too.

This post details the steps of a basic determination of the solar parallax from a Venus transit. References are:

2) The 2004 Transit of Venus, which works through a simple hypothetical example constructed from the 2004 transit data.

Throughout, angles are variously measured in radians, degrees, arc-minutes, and arc-seconds, as convenient:

(Legal disclaimer: Warning! Do not not try this at home without protection! Gazing directly at the sun will permanently damage your eyes!)

B) Determine the angular separation of the two (almost overlapping) transit tracks (chords on the solar disk) from the transit data. There are various methods, all depending crucially on the transit durations. Reference 1 uses right triangle constructions while Reference 2 uses the included half-angle $\theta$ of the chord:

From this geometry, Reference 2 calculates the track separation $\Delta \beta$ (they call it $D$, but I'm following the notation of Reference 1).

D) The solar and Venusian parallaxes are related by their relative distances from earth:

G) The standard solar parallax $p_s$ is referred to a baseline of 1 earth-radius, versus the 0.917 earth-radius baseline used in the hypothetical measurement of Reference 2. Scaling, one finds $p_s=\alpha_s$/0.917=8.37 arc-seconds.

The accepted value of the solar parallax is 8.79 arc-seconds, so the example's error is about 5%.

6
Why is 1 AU the distance between the Sun and the Earth?
7
When and how were relative distances to the planets first measured?
4
How could Horrocks have measured the AU?
2
How is the sun's equatorial circumference measured?
3
Transit of Venus and the computation of the Astronomical Unit

4
How did Cook and other astronomers time the 1769 Venus transit?
7
When and how were relative distances to the planets first measured?
2
Did Aristarchus take the radius of the Earth into account in calculating the distance to the Moon?
3
How did Copernicus establish the relative distance to the superior planets?
25
How fast is the Earth-Sun distance changing
0
Calculating the Earth-Sun distance
3
Transit of Venus and the computation of the Astronomical Unit