After watching a documentary about Einstein's theory of relativity, my mind was busy trying to comprehend how space bends when space is void and not made of matter. And additionally, does his theory involving gravity ignores Newton's law of gravity since Einstein thinks that we are being pushed down by space but not pulled down. I am looking for some answers since I am pretty confused right now.

When we talk about space bending, we often visualize it with matter, such as a rubber sheet. As you pointed out, space is not made of matter, so the reality has to be something different from the simple metaphor. One approach to understanding why we say "space bends" is to look at the effects of relativity that we can observe. We can then compare those who what happens when you stretch or bend a sheet of material, and see why that metaphor is so useful. 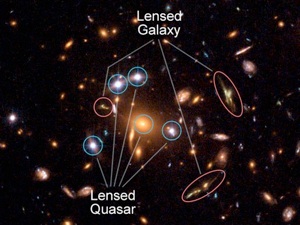 This is a real, observable fact of nature (the picture above happens to be taken from the Hubble Space Telescope, and spectroscopy confirms that indeed we are seeing multiple images of the same galaxy and of the same quasar). It's just as real as the fact that light bends when it goes through a glass lens.

So when we try to model this effect, we find that the behaviors we see are almost identical in nature to what would happen if space-time was a "thing" and it was stretched. We actually capture this in a concept of "curvature" of space, but intuitively, the curvature has effects so similar to that of the curvature created when you stretch a rubber sheet that we like to say space "stretches." It's an effective metaphor that captures all of the behaviors we actually see.

In this visual, we are trying to capture the 3d effect of the curvature of space with a 2d surface because that's easier for us to physically show. In case 'a', where there are masses, a photon can travel in a straight line which does not curve. In 'b', there is a mass distorting space time. Ignore the mass itself for a moment (we'll explain why it is shown that way in a few moments), just focus on the spacetime grid behind it. We can see that that distortion causes the path of the photon to deviate.

Now we typically show this sort of picture with a mass sitting on top of it, like we see here. What the heck does this mean?! The answer is merely that it is convenient to show it this way. It turns out that the distortions we see in spacetime are mathematically similar to the distortions we see when you put a mass on a rubber sheet and let it stretch the sheet out. For many, this is a natural image, and it helps them. It gives them something in their daily life that they can relate to. For others, it brings up existential questions, like your own.

Now as for "ignoring Newotnian gravity," it's not that we are ignoring it, its that we are explaining the observations in a different way. We never directly observe Netwtonian gravity. It isn't actually a physical thing; it's a model. For many observations (especially those of the planets), Newtonian gravity is very effective at modeling what motion we see.

Relativistic gravity explains the exact same behaviors using a different model. It explains it using the ideas of stretching space and distorting time. In simple cases (such as at slow speeds and planet-sized masses), the two equations yield almost exactly the same equations. They just arrived at those equations through different ways. However, the path Einstein's relativity takes also does a very good job of explaining what we see at high speeds. Newtonian gravity falters in this domain; it gives bad predictions.

The point of this is, Relativity and Newtonian gravity both model the same systems, and the same observations. Newton's model is valid in some domains, and relativity is valid in a larger domain. If you're doing simple things, you can typically use the simple model. If you're doing things which are very sensitive to gravity, you may need to use a more advanced model, such as the one put forth by relativity.

Not the answer you're looking for? Browse other questions tagged general-relativity gravity newtonian-gravity spacetime curvature or ask your own question.

4
Is there proof gravity bends space or is it just the most convenient explanation?

4
What is the consequence of "infinite" gravitational force?
3
Why was pseudo-Euclidean geometry not enough for general relativity?
2
Einstein introduced General Relativity 2.0
10
Einstein and his so-called biggest blunder