In what scenarios would adding more mass to an object being thrown allow for more distance with the same force?

OK, assume that an object with mass M is thrown with X amount of force. This object would travel a distance, D.

How would increasing M, while leaving X unchanged cause an increase in D?

For example, if I throw a nerf dart as hard as I can, it will only travel so far. However, if I add weight to the nerf dart, I can throw it much farther. Why does this work?

Also, why would the same not apply for the dart being shot from the nerf gun, or would it?

I believe it has something to do with air-resistance and trajectory, are there any formulas I can use to prove this?

Not homework, just a discussion with a friend. I don't have physics until next semester.

When you specify that you use the same 'force' to launch both darts, it is not clear what you intend. Using the same force in Newtons over the same distance should result in the two darts acquiring the same kinetic energy but different speeds. However, as BowlofRed points out, your ability to launch objects is limited by the mass of your arm. If the mass of the arm is much larger than the mass of the dart, very little KE is imparted to the dart. All light-weight objects are launched with approximately the same speed, which is limited by size and strength of the arm and the technique used. See Physics of Overarm Throwing.

If there was gravity but no air resistance, the object launched with the greater speed would travel further. The range of a projectile without drag is proportional to $v^2$ and is independent of mass. If there is both gravity and air resistance the situation becomes more complex, except when the objects are launched close to straight up or close to horizontal. Darts are usually launched close to horizontal.

With Air Resistance (Drag) but no Gravity

For the same shape and size of object, travelling at the same speed, the drag force $F$ caused by air resistance is the same. It depends on cross-sectional area but not mass. For thrown objects, drag force is approximately proportional to speed through the air : $F=-kv$.

Which dart travels further depends on the initial momentum $mv_0$.

The above result indicates that the heavier dart will travel further still, because the lighter dart starts with less KE.

Here $V=v$ so the ratio of distances is
$x_M/x_m=Mv/mV=M/m$.
The heavier dart travels further still than when the darts have the same KE.

Conclusion : In both scenarios the heavier dart travels further.

Your problem is that you are assuming a constant force. This is difficult to deliver. Since $F=ma$, in order to maintain a constant force as the mass decreases, the acceleration has to increase. For small masses, your arm can't accelerate fast enough to generate the required force.

It's easy to push on a baseball with 10N of force. It's very difficult to push on a pea with 10N. You may be pushing hard to throw the nerf dart, but most of that effort is going into accelerating your arm. By adding mass, your limited acceleration is able to apply a larger force to the dart.

An object thrown has two relevant properties: energy, and momentum. When you throw a light and a heavy object "with the same force" (and with this force applied over the same distance), they will have the same energy (energy is Force times distance), but different momentum (Force times time - the heavier object will take longer to throw, and will acquire more momentum).

On the other hand, the heavier object will fly more slowly. Whether it travels further or not depends on which is more important - gravity, or drag.

Case 1: gravity dominates
In the case of a small, heavy object (like a cannon ball), gravity will most likely dominate. In that case, the furthest you can shoot your projectile depends on the velocity and launch angle. If drag is ignored, a launch angle of 45° gets you the most distance, $d = \frac{v^2}{g}$. So if you can throw with twice the velocity, your range increases 4x. This says that if drag is not a factor (for example, on the moon), then you will be able to throw a lighter object further.

Of course in real life, there is a combination of these two factors at play, and you can't solve this problem analytically. But you can solve it numerically. Which I did, just for fun (and illustration).

Taking an object with a diameter of 1 cm (low drag), 5 cm (medium drag), and 20 cm (high drag), and a mass ranging from 20 grams ("light") to 2 kg ("heavy"), I "threw" that object at an angle of 45° with a constant force for 1 meter (unrealistic, but those were the conditions you had stipulated). I did a bit of tweaking of that force, figuring that the range of a 150 g object should be below 100 m (the maximum pitch of a 145 g baseball is 132 yards). Then I plotted the resulting trajectories: 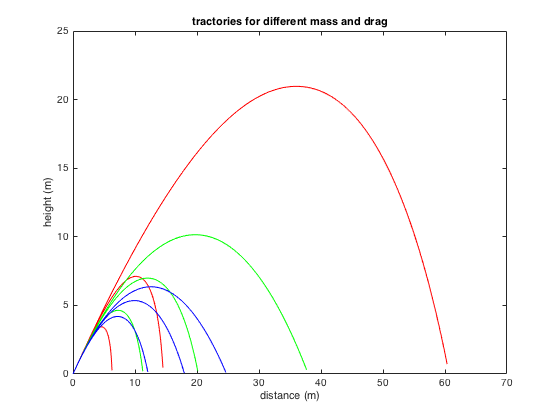 Here the red traces correspond to a mass of 50 g, green = 150 g, blue = 250 g; and the three curves correspond to a diameter of 5 cm, 15 cm, and 25 cm. As you can see, one of the red curves (corresponding to lightest object, smallest diameter) goes furthest; but as we add more drag (diameter), it quickly falls back in the standing. By comparison, the small heavier objects don't fly as far; but as drag becomes more important, they "win".

The following MATLAB code was used to generate the trajectories:

And plotting the trajectories was done with:

In both cases, one may apply same force through the hands, but much of the force is lost in case of nerf dart because only a small part of the force transmits to the dart through contact points of fingers. Rest energy is dissipated as in case of a freely thrown punch. Furthermore, there is drag force of air on the dart thus minimizing the effective force. It is a similar case of throwing a paper while holding it in vertical plane and force is perpendicular to the plane of paper. The reason for small amount of force is that the mass of nerf dart or paper is very less and hence they accelerate very fast while in contact of hands hence taking less impulse i.e. the contact of force is for less time. While with a higher mass, the contact time will increase thereby increasing impulsive force and hence kinetic energy imparted.

Not the answer you're looking for? Browse other questions tagged newtonian-mechanics forces mass drag distance or ask your own question.

1
Calculate final velocity for vertical projectile with air resistance
10
Can a ball be struck to give it a spiral spin?
3
Why does a force divide equally on multiple supports/legs?
0
What happens to the momentum of earth-ball system when a ball is thrown upwards?
0
What is the distance from an object at which the gravitational force is exactly zero?
1
Measure mass with high precision at home?