How is it possible that the sound waves themselves are not heard when making an echo (by the fetus), but the pulses do?

If a woman is pregnant an echo can be made using a frequency of 1 to 10 Mhz. These sounds we can not hear. Now, a pulse is sent each 110 microsecond with the so said frequency. Now it turns out that the fetus can hear this with a decibel of 100. That's pretty much.

But how can the fetus hear this pulse but not the sound itself as these pulses are made of inaudible sounds? The frequency of the pulse itself is within the audible range (3 kHz).

Should this also be the case when using elektromagnetic waves?

The pulsed sound has content within the range of human hearing due to the edges of the pulse itself. Intuitively we can see that the spectra must contain low frequencies if we used low frequencies to generate it, but we can use Fourier transforms to show why.

The signal you describe is a gated sine-wave (it goes by many names). You start with a sine wave in the megahertz region and then you turn it on or off at the specified times. 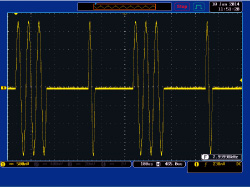 Mathematically, this is the result of multiplying the megahertz sine wave by a kilohertz square wave. Now one of the nice things about Fourier transforms is that we can understand the frequency spectra of complex signals like this by decomposing them. For example, there is a rule for Fourier transforms:

That is to say that, if you multiply two signals in the time domain, it is the same as convolving them in the frequency domain. Convolution is defined to be $(f\star g)(t)=\int_{-\infty}^{\infty}f(\tau)g(t-\tau)d\tau$, and in this special case where one signal is a simple sinewave, that has the effect of "centering" the square wave's frequency response on the frequency of the sine wave.

(Important note: the picture below crops off the frequencies that are important for this topic. In most situations we can ignore them, as they did in this picture, but in our particular situation we actually care about those subtle harmonics. Imagine they kept drawing the warbles fainter-and-fainter as they approached f=0)

This means that some of the upper harmonics of the square wave interact with the sine wave in such a way as to produce noticeable "beats" in the audible region. This is what the fetus hears.

This issue could be mitigated by using a wave other than a square wave to gate the high frequency signal. Other windowing functions (such as Chebychev windows) have fewer high frequency components, so would mitigate this effect. However, the hardware to switch a sine wave on and off is far cheaper than the hardware to modulate it sufficiently to do advanced filtering.

Not the answer you're looking for? Browse other questions tagged acoustics biophysics or ask your own question.

64
Why do power lines buzz?
0
Resonance in a 1 ft granite box
14
Is it possible to create an audible sound source in mid air by intersecting ultrasonic sound beams?
1
How are sound waves of different speeds heard differently?
3
Do our ears (or brain) only perceive periodic disturbances?
0
Does switching a laser on create multiple frequencies?
0
Sound Waves Moving Large Objects?