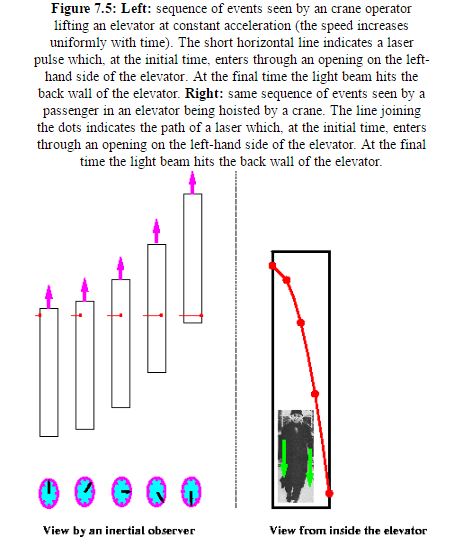 I have been told that light rays seen from inside an accelerated elevator will seen as following a curved path, parabola. Like the image below. But what happens when a pulse of light entered into a non accelerating but uniformly going upward. It seemed to me that like the image below the pulse will entered at the top of the elevator and then after an amount of time light will move forward a bit. Meanwhile the elevator will go a bit upward. so when viewing from inside it will appear that the light rays have again followed a parabolic path! in a non accelerating elevator! I know that can't be true. Where am I going wrong?

1 As measured by clocks outside the elevator. I'm glossing over quite a few details of the Lorentz transformations here, but the argument is basically the same when they are included.

Your picture is used to help visualize a thought experiment where the speed could be constant or accelerating depending on the statement. In reality you would only see a light spot on the right wall. If the elevator was moving at normal speeds, the spot would be directly across from the opening whether moving at constant or accelerated speeds. The faster the elevator moves, the lower the spot will be. When the speed is constant the light spot is stationary. If the speed is accelerating faster then the spot slowly moves down the wall. Keep in mind the light is not curving but the wall of the elevator is rising before the light gets there.

Not the answer you're looking for? Browse other questions tagged general-relativity reference-frames equivalence-principle or ask your own question.

1
The Light Ray Bends Round!
4
The Equivalence principle of General Relativity and the Doppler Effect
2
Demystifying the physics of weightlessness in parabolic flights
8
Equivalence principle and the meaning of the coordinate speed of light
2
Equivalence Principle and bending of light
1
Making tidal forces “disappear” via coordinate transformations
0
Is this anomalous phenomenon about the gravitational blueshift effect experimentally tenable?