Imagine 2 parallel antennas (wires) of equal length (a) with a distance r between them.

Both have AC currents with identical sine wave forms (equal frequencies and amplitudes) . They are also in-phase with each other.

Edit: The distance between them (r) is equal to half the wavelength due to the frequency of AC, (r=λ/2) so that there's no phase delay between them.

Editting the edit above: It turned out that (thanks to Void for making me aware of this), another restriction concerning the "near field equation" for the antennas is necessary here. The distance r should be far enough to let the EM fields to "settle down" and become more like plane waves before they hit the other antenna/wire. The minimum distance for this is calculated as,

unless I misunderstood anything.

For the distance between the wires therefore, I assume the two conditions below are satisfied:

I’m trying to calculate the average force between these wires (which must be an attractive force) by using very simple math: I know the magnetic field at point p, caused by a current of finite length wire is given by,

By integrating the magntetic field of I1 over a length of an opposite wire and multiplying with the current I2 at each point of that opposite finite wire, I think I found the magnetic force acting on each wire: 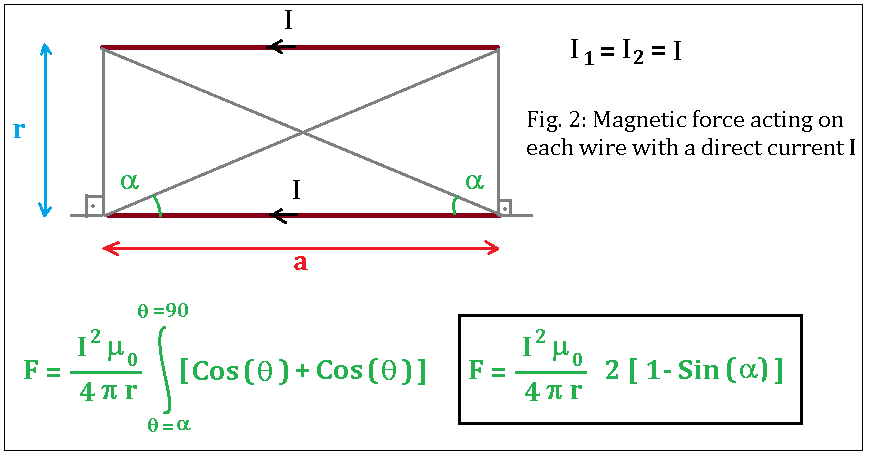 Now I have to use this equation in an AC situation. Currents are in phase, so I thought their average multiplication (averaged by time) could be calculated by dividing the area under the curve of current squared, by the time of half a period (which is simply pi). 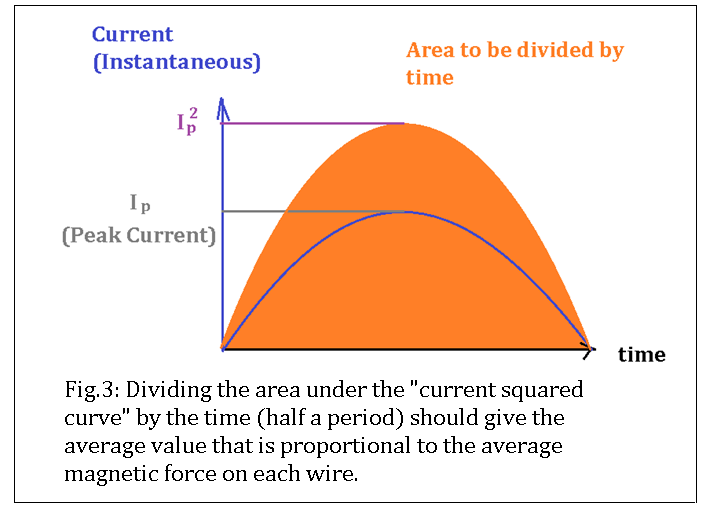 So the average force between wires should be: 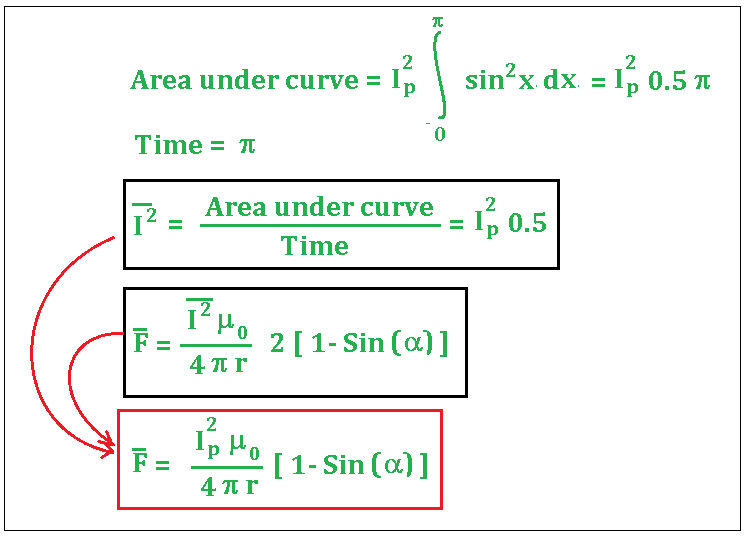 No need to complicate this equation any further by defining the angle alpha in terms of lengths a and r.

I brought different pieces of knowledge together to form a new one and when I do this, it usually turns out to be wrong so I can’t be confident about this equation.

I have two concerns (edit: now a third one):

1- I'm not sure if I calculated the area under curve correctly.

2- If two such antennas applied a force to each other, this force should somehow be related to the antenna power or antenna gain. But when calculating the antenna power, I see that not only the magnetic field but also the electric field is taken into account. It becomes more than a simple DC "Amperian situation”. It’s electromagnetic. But where is the electric field in this method? Am I missing something?

3- About the "near field" approach; as far as I understand, because the instantaneous current and voltage is not the same at various segments of the antenna during the oscillations, the EM field is also complicated at close range relative to the antenna length and also relative to the gradients of instantaneous voltage and current values over the antenna (which is realted to the frequency and wavelength). But I can't be certain about the equation I used. According to the equation, the antennas could be as close as about 1/2 or 1 wavelength. However in practice, the minimum distance is often told to be greater than 2 to 10 wavelengths to stay away from the near-field (aka. the reactive field). So how would be the correct equation for the "near field" boundary condition?

Browse other questions tagged electromagnetism magnetic-fields antennas or ask your own question.

0
What is the wavelength of electrical current?