Where do all these electrons come from? [duplicate]

So how generators make electricity from motion is the move a magnet around or through a coil of conductive wire, which causes the electrons from the metal to move in the direction of the magnet. But that could theoretically happen forever. When does the metal wire run out of electrons? Are electrons being formed? Is matter being created?

Also if you want to help me out a bit more, please explain how transformers work and how voltage and amperage are related.

Electrons are not being created nor they are destroyed. The electrons already exist in the metal.

Where did the electrons come from?

What is electric current?

Electric current is defined as the amount of charge moving across a cross-section of a conductor per unit time.

To have a current in a metal, you need to have a net movement of charge.

In figure one, the circuit is open. The electrons are free to move around randomly (due to thermal energy). The electrons keep bumping into atoms and keep changing directions. There is no orderly motion of electrons. Therefore, on average, there is a net zero movement of charge.

Therefore, no charge is created or destroyed rather they are just moved. It is similar to a water in a hose. The water in a pipe does not flow unless there is a pressure/height difference across the ends of the pipe. However, the water molecules inside the pipe are in continuous motion.

An important point to note here is that the electrons move really fast (millions of meters per second) but at the same time, they collide with many atoms. Therefore, the net velocity averaged over time is very small. We call this velocity drift velocity. In copper, it is of the order of millimeters per second.

What does a generator do?

An electric generator basically creates an E.M.F (voltage/potential difference) across a conductor which produces a current.

How does a generator work?

An electric generator works on the principle of electromagnetic induction.

The law states that if the flux through a coil of wire is changing, an E.M.F (voltage) is induced in the coil.

Magnetic flux is the amount of magnetic field lines passing through a surface.

The magnitude of E.M.F induced is given by Faraday's law,

where $\phi_B$ is the magnetic flux through the coil.

The E.M.F induced is such that the induced current produces a magnetic flux of its own which opposes the changing magnetic flux. This is known as Lenz's law.

If you are new to magnetism, refer to this answer which gives an easy way to understand magnetostatics if you are good with electrostatics

How are voltage and current related?

In simple DC circuits, they are related by Ohm's law,

where R is the resistance of the conductor.

Yasha's answer provides an excellent physics description of how the process works.

But from reading your question you seem to understand what electric current is and how it arises. The thing you seem to be missing is that a generator doesn't generate electrons, it's a bit a misnomer if you think of it that way. It generates an electromotive force (a voltage)

The generator (or battery) is not a source of electrons, it's a pump to move electrons that are already there in a wire. This is why a circuit needs to be a closed loop to work. 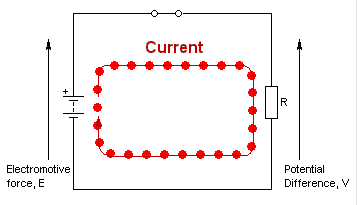 Not the answer you're looking for? Browse other questions tagged electricity electrons conductors or ask your own question.

14
Where do electrons in electricity come from?
2
In a circuit, does a battery create electrons which it 'injects' into the copper wire?
3
What do we mean with magnetic monopole and dipole?
1
Does turning a circuit on increases its gravitational pull?

13
Does 'electricity' have mass? Is 'electricity' tangible?
5
How electricity, and generating electricity works on the atomic level?
0
How much electricity can be generated from ambient sources?
0
Where do the charge in a series/circuits (?) come from?
2
Why does charge polarization generally occur in insulators and not conductors?
25
Speed of electrons in a current-carrying metallic wire: does it even make sense?
0
How does 'conservation of law of energy' work in an open circuit connected to a hydroelectric generator?
2
How do protons and electrons separate across a conductor in the Hall Effect, if protons “don't move”?
0
Ground Wire to Prevent Static Discharge