How does static electricity produced in blizzards?

I've read that in strong blizzards static electricity can occur and even produce lightning. How friction between snowflakes can create distribution of electrical charge?

When two or more different substances rub off each other, depending on their atomic makeup, electrons that are loosely bound may often be exchanged between them. So you end up with an accumulation of electrons (negative charge) in one region and an opposing positively charge in another region.

In many ways, a blizzard resembles a thundercloud (in its composition and wind speeds), so it's not really surprising that lighting can occur in blizzards.

The extreme conditions in a blizzard causes the molecules of water, oxygen, nitrogen, drops of water and the semi-solid ice crystals to rub together violently. Just like glass and silk rubbing together, this can cause a build up of two sets of opposite electrical charges. You then have two or more regions of opposite charge and a lighting strike will eventually result to equalise this electrostatic imbalance.

From: How Lighting Discharges Through Air

In order to get a conventional spark, the kind that a spark plug makes, the electric field needs to surpass the conventional breakdown field, the point at which air loses its insulating properties and becomes capable of conducting electricity. For air, this is about 70,000 volts per inch at sea level. A car accomplishes this by supplying a high voltage—say 20,000 volts—across the narrow gap of the spark plug.

Blizzards can also produce large voltages. They do this when ice and water particles carried by high winds collide with soft hail and snowflakes. 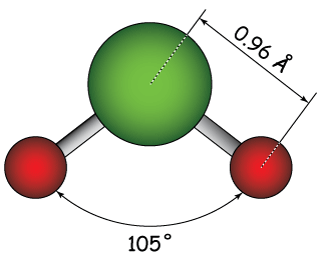 I wonder how exactly (by what reasons) electrons that happy in the water molecule, jump to another molecule of water when collide.

If you look at the diagram above, you can see the large oxygen atom and the two smaller hydrogen atoms that makeup the water molecule and are the basis for ice crystals. If the kinetic energy of another particle is high enough, because of strong winds, it is able to exceed the energy needed to remove an electron. This is called ionisation. That's why normally, the water molecules do not lose electrons , but in high winds, with particles hitting off each other, the high velocity particles do have enough energy to remove the electrons.

Not the answer you're looking for? Browse other questions tagged electrostatics electricity friction lightning or ask your own question.