Poisson Equation for electric potential is: $$\nabla^2 V=-\frac{\rho}{\epsilon}$$ Solving the equation require two boundary condition. I'm confused about the use of these boundary conditions in some situations, like for example the following.

Consider two conductor planes, both at zero potential ($V=0$). Between the plates, there is a region with a charge density $\rho$ (the grey one) and another one with no charge. 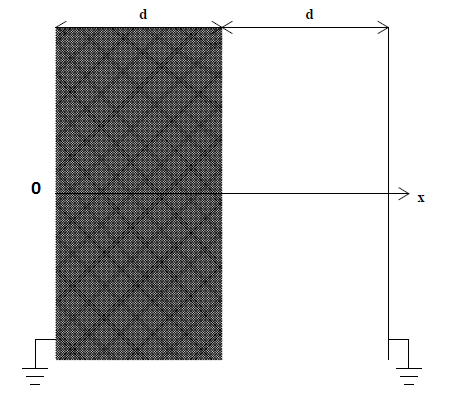 But I need one more condition in order to solve the equation, and I do not see where to get it.

In general, if Poisson Equation has to be solved over two different regions, how can I manage with situations like this one where I have only two potentials known but one of the potential $V(d)$ is "in common" between the two regions but it is not known in principle?

Not the answer you're looking for? Browse other questions tagged homework-and-exercises electrostatics potential boundary-conditions or ask your own question.