How does precession affect angular momentum?

I have been studying Irodov's problem book. There are a lot of good problems that challenge conceptual knowledge, and so I have to ask somebody for a qualitative answer. I can best describe my confusion by example, so let's take problem 1.284:

We have a gyroscope precessing around its vertical axis (Figure 1.73). The axis of the gyroscope is horizontal. 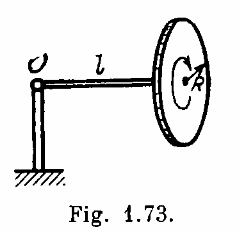 I have managed to find an online solution here. So, since the gyroscope is rotating about its symmetry axis, I agree that it will have angular momentum in the horizontal plane (it has a radial angular velocity).

Is this maybe due to the referential frame (do we perhaps observe the gyroscope from a frame rotating vertically with an angular velocity equal to the precession angular velocity)... ? If this is the case, why is there no centrifugal force?

Something doesn't add up, either way.

It does have angular momentum in the vertical direction, so that should resolve your issues. There is a horizontal torque, so the upward-tilted angular momentum vector simply traces out a cone, where it's rate of change is always horizontal. The vertical component will usually be very small, but presents no problems, it just stays constant.

No, you are absolutely right, if your origin is the point $O$ in the figure above, then the only torque is in the tangential direction. There is of course an angular velocity $\alpha$ in the $z$ direction. The way it works is the radial component of the angular momentum $\vec{L}$ precesses, and $\frac{d\vec{L}}{dt}=|\vec{L}|\alpha \hat {\theta}$, where $\hat{\theta}$ is the unit vector in the tangential direction. Equating the known torque with $\frac{d\vec{L}}{dt}$ would now give you the precession frequency $\alpha$.

That solution you linked to, probably has notational flaws, because it seems to suggest the radial angular momentum changes through the change $\frac{d\vec{\omega}}{dt}$, which is simply not possible, as there can be no net torque in the radial direction.

The interesting thing is, the gyroscope picks up a small constant angular momentum in the vertical direction as well now, when in the beginning the angular momentum was purely radial. This means the bearings near the point of contact $O$ produce a tangential force and hence a vertical torque, for a very short period initially, to set up the angular velocity $\alpha$ of the gyroscope.

Not the answer you're looking for? Browse other questions tagged newtonian-mechanics angular-momentum rotational-dynamics precession or ask your own question.

0
Angular velocity of precession
3
Precession on a heavy rod: Angular momentum and torque contradiction
1
Rotational Work-Energy Theorem and uniform precession of a gyroscope
1
The acceleration of gyroscopic precession
0
Conceptual Question About Gyroscopic Precession of body about Two Axes
0
Centripetal force in a gyroscope
0
Gyroscopes and Conservation of Angular Momentum follow-up