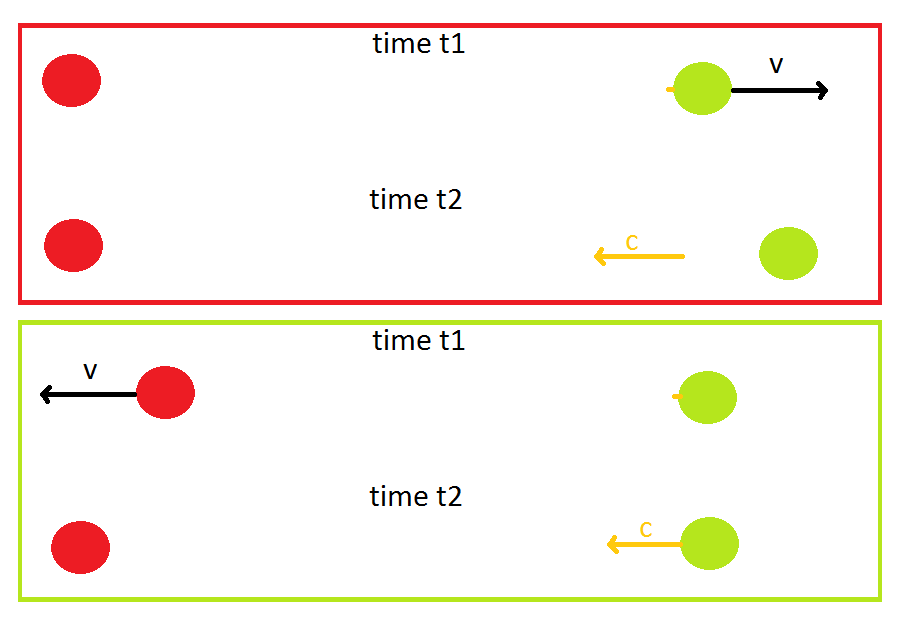 I know this question may seem a bit too simple, but I still haven't managed to find an answer to it.

I know that there is something VERY wrong with this scenario - it is so basic, and yet there are so many problems with it - but, as long as I have been trying to figure out what, I kept getting to more contradictions.

The answer is that you can't mark a path out of pure light. If you want the light pulse to leave a trail like a firework, it needs to travel through a medium which ignites when light passes through it. This makes a big difference because now it matters which of the planets is at rest with respect to the medium.

The choice of a gunpowder filled universe may seem like I just picked one particular situation in which your experiment doesn't work, but remember the basic point: you can't make a trail out of pure light, because there is no such thing as stationary light. You either make a continuous light beam, which will stick to the green planet, or you fill space with firework material, which will pick out a preferred reference frame.

Say, this light can draw its path in space

This is where the problem lies. As you have noticed, "its path in space" is not a very meaningful notion. You seem to imagine the photon leaving behind particles that remain stationary, but "stationary" is not a well-defined concept in space.

Not the answer you're looking for? Browse other questions tagged special-relativity speed-of-light reference-frames or ask your own question.