Inertia of disk with center of mass off-center

I want to calculate the kinetic energy of a disk (radius $R$ and mass $M$) rolling without slipping in horizontal plane, but with center of mass displaced a distance $r$ from the geometrical center.

I have no problem with the translational part (center of mass), but when dealing with the rotational $\dfrac{1}{2}I\dot{\theta}^2$ I dont know what expression is the correct one for the moment of inertia.

$2.$ $I=I_{CM}+Mr^2$, but in this case (using parallel axes theorem) I dont know how to calculate the $I_{CM}$, since the mass distributtion is unkown (and not uniform because the center of mass is not in the center).

Any help would be appreciated.

I found in Landau the same problem (solved): 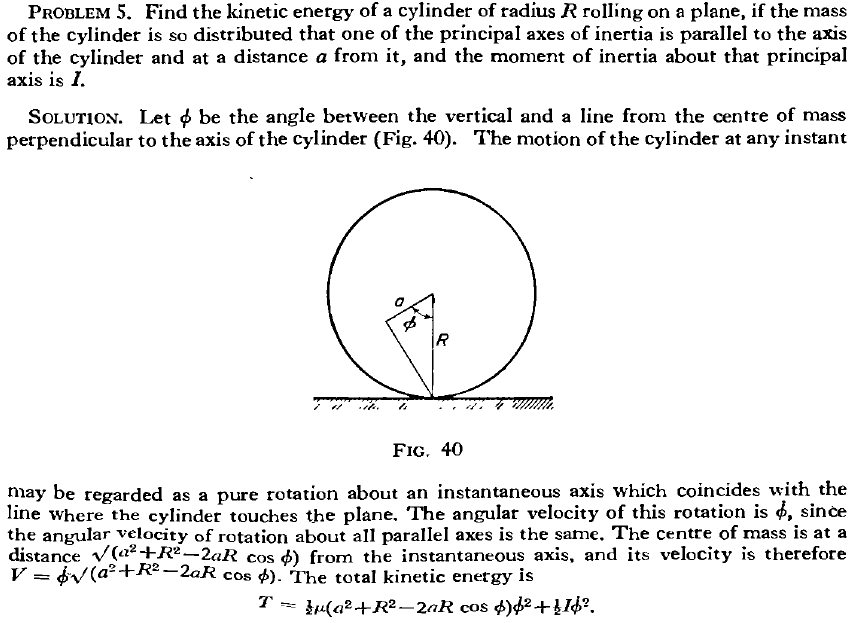 Now I have to add the rotational part $\dfrac{1}{2}I^{*}\dot{\phi}^2$. So the only way in order to get the same result that Landau is $I^{*}=I$, but it says that the disk rotates about its center of mass, wich i dont think is the case. If instead $I^{*}=I+Ma^2$, (that is, translating the rotation about the center) like suggested, then the result is not the same. Whats wrong?

You cannot find the moment of inertia just by knowing the mass off the body and by how much the center of mass has been displaced i.e location of center of mass.

You did not mention before your edit that the moment of inertia about the center of mass was given.

You seem to be having a problem with the expression of kinetic energy of a rotating body. The total kinetic energy expression is $$K=K_{translational}+K_{roatational}=\frac{1}{2}Mv_{CM}^2+\frac{1}{2}I_{CM}\omega ^2$$ The roatational kinetic energy as such can be about any axis and varies from axis to axis because of change in moment of inertia. However, when you're calculating the total energy expression $K=K_{translational}+K_{roatational}=\frac{1}{2}Mv_{CM}^2+\frac{1}{2}I\omega ^2$ you have to use moment of inertia about $CM$. The reason becomes evident when you go through the derivation of the total kinetic energy of a rotating body. I'll give the derivation later if you want because that will be going out of scope of the question.

Also, mark you edit. Right now, it seems like its a continuation.

Not the answer you're looking for? Browse other questions tagged homework-and-exercises rotational-dynamics moment-of-inertia or ask your own question.