What experiments prove the greenhouse effect?

What experiments prove that heat can be "trapped" by a layer of material with suitable optical properties, such as carbon dioxide? I've read a little on Wikipedia but I've got only some names, not the experiments.

The evidence for global warming is from the known heat-trapping dynamics of the atmosphere. The atmosphere opaquely rescatters infrared light according to the density of CO2, methane, and H2O, so that as each of these gasses increase in concentration, the atmosphere heats up. The coefficient which determines how much the temperature goes up can be estimated in models, and measured in ice-core data, and the theory and observations agree as well as can be expected for such a complex system.

The concentration of CO2 has increased due to human activity, as everyone agrees, and in standard models, this predicts an expected rise in temperature of less than but on the order of 1 degree, which is exactly consistent with the observed warming over the last two decades. The predictions have an uncertainty, but the sign and the order of magnitude are clear, and consistent with the observations.

The uncertainty in the models does not change the fact that there was a predicted effect--- global warming in direct response to CO2 levels--- and this effect was observed on a geologically instantaneous time scale. There is no plausible reason for the effect other than human CO2 emissions. It would require a conspiracy to make an effect consistent with predictions if these predictions were somehow faulty, and there is no reason to suspect that they are.

The amount of future warming we can expect is subject to uncertainty, since we don't have perfect climate models. There is feedback in the biosphere which tends to amplify the warming effect of CO2, but we don't know exactly how much. Since we are unfortunately doing the experiment, we will probably find out.

There is just no way that nature would conspire to magically warm the planet over the past two decades in a way exactly consistent with the heat trapping estimated by the models. This is the reason for the scientific consensus that global warming is happening. There is no good reason for doubting this conclusion, but there is a lot of big money trying to seed doubt. When scientists predict something, model something, and then observe things consistent with the model, we generally say that they have verified the model. The model of global warming has been amply verified by now, and it was already fairly probable when first proposed in the 1970s. It is now essentially dead certain.

The greenhouse effect is well-established science, and experiments that demonstrate the effect on a lab scale are common to the point that they are often presented in science fairs. When I say "greenhouse effect" in this context, I'm referring to the radiative trapping of heat by absorption of outgoing radiation by gases. As has been pointed out on Physics SE before, this is distinct from actual greenhouses, which maintain their air temperature higher than the air around it by preventing convective heat transfer with higher portions of the atmosphere.

Let's discuss the required attributes of an experiment to properly demonstrate the described greenhouse effect.

We should require that the experiment has a control volume and a volume that demonstrates a higher temperature due to the presence of a (higher concentration) greenhouse gas. To be fully representative of the planetary greenhouse gas effect, we will likely use an external source of radiation such as a lamp. There is no shortage of demonstrations that meet these requirements on youtube. The gas could be any common greenhouse gas. Naturally, this includes carbon dioxide. The gas needs to have sufficient mass-thickness to achieve meaningful blockage of outgoing radiation. Experimental budget will probably require it to be done at atmospheric pressure, thus, a higher concentration is typically used to show the effect. For instance, by having a container that is nearly 100% CO2, 1 foot of thickness blocks the same amount of radiation as 350 ppm concentration of the gas in the atmosphere over about half a mile. Because of this, differences in temperature higher than experimental error can be (and have been) observed in small-scale experiments. 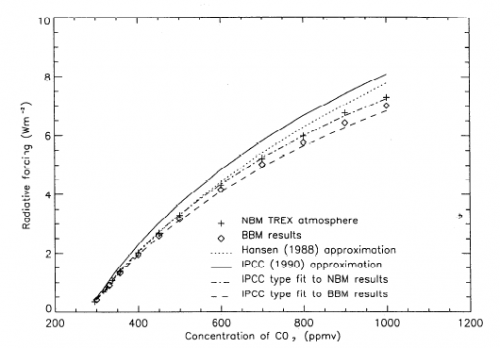 This goes above and beyond demonstrating the greenhouse effect, and actually quantifies the effect through experiment, all of which are consistent with the desktop science projects that a small science class can do. I should qualify these statements with the fact that the radiative forcing is specific to the temperature of the surface, its emissivity profile, the other gases present, and the incoming spectrum. The parameters of a simple experiment will differ from greenhouse effect on a planetary scale, but the presence of the effect is the same for both. The absorption bands specific to the greenhouse gas (and in particular CO2) are well established by science. The increase in the effect due to increasing concentration of a greenhouse gas is due to effective broadening of absorption bands, which leads to definable predictions about how the radiative forcing changes, which this site has entertained questions about before. A correct description of the greenhouse effect may range in sophistication from saying it "blocks the outgoing radiation" to using detailed computer models of the radiative physics. Either way, the effect is very well proven by consistent theory and experiment and can make definable predictions with good accuracy. This part of climate science is, in no way, credibly contested. The contested part of climate science relevant to present-day politics is if the sum total impact of humans on climate will lead to higher surface temperature, which is outside the scope of this question.

You could compare the surface temperature of the Earth with the moon - same distance from the sun, same surface material, one without an atmosphere of greenhouse gases

You need to distinguish between the greenhouse effect, which is well established, and anthropogenic global warming, which is rather more controversial.

The greenhouse effect is due to gases like water vapour and carbon dioxide that allow visible light to pass through them but scatter infrared light. This causes the planet to warm up just like a greenhouse does (hence the name). I don't think there's a definitive experiment to point to, because the effect is so obvious and has been known for decades if not centuries (I forget when it was first discovered that carbon dioxide absorbs infra-red, but it was a long time ago).

The green house effect is a very good thing otherwise the Earth would be too cold to support life. As Martin says in his answer, the Moon gets the same radiation from the Sun as the Earth, but without a greenhouse effect it has a much lower average temperature: about -50°C according to Wikipedia (the lack of an atmosphere also means it has huge swings in temperature).

There can be too much of a good thing. The greenhouse effect also operates on Venus, where it raises the temperature to 460°C.

Anthropogenic global warming is the idea that carbon dioxide created by mankind is increasing the strength of the greenhouse effect and causing a temperature increase. It certainly appears that the average global temperature is increasing and the evidence from this comes from historical climate records. See http://data.giss.nasa.gov/gistemp/ for an analysis of this. It's also clear that carbon dioxide levels are increasing. See http://climate.nasa.gov/keyIndicators/ for more info. Carbon dioxide levels can be measured for air bubbles trapped in Antarctic ice so we have a pretty good idea of how they've changed over time.

0
Is carbon dioxide a greenhouse gas?
53
Common false beliefs in Physics
12
Why is radiative forcing from CO2 logarithimic and not a decreasing exponential?

1
What is lambda R in Richardson's Law?
105
Explain it to me like I'm a physics grad: Greenhouse Effect
2
Carbon capture and liquid air energy storage - a single system?
0
Does water vapour also emit radiation when rising into the air before condensing?
7
Can anyone explain the REAL reason why CO$_2$ increases global temperatures (not the simplistic greenhouse analogy provided for public consumption)?
0
What is the thermal conductance of a typical gaz-solid interface?