Why is the atmosphere transparent in the visible spectrum?

One of the great 'coincidences' in physics is that the Sun happens to shine most brightly at exactly the wavelengths our eyes can see; it's an easy explanation that our eyes evolved to make the most out of what was available.

However, this spectral window is also one of the few at which our atmosphere is transparent, with Rayleigh scattering and the ozone layer protecting us from the UV and strong water vapour absorption in the IR until way into the radio range.

My question is: is this a coincidence? Were there geological factors that made it so? Or is it just lucky chance? (I also notice other planets in our neighbourhood weren't quite so lucky.) Or had atmospheric absorption been different our eyes would have tuned to whatever spectral window were brighter as a whole?

but assuming you're talking about Venus, Jupiter, Titan etc, the scattering is from particles not from gases. After all, Earth's atmosphere isn't particularly transparent on a cloudy day.

It is a co-incidence that the Sun's light peaks in the visible region. Planets have been found around all sorts of stars, and if the star is cooler or hotter than the Sun it's spectrum will peak at a different wavelength. However it may not be a co-incidence that we evolved on a planet whose starlight does peak in the visible wavelengths. After all, if it didn't, life on Earth would probably be different and we probably would be here.

Looking at this rather popular (because of the climate debate) plot: 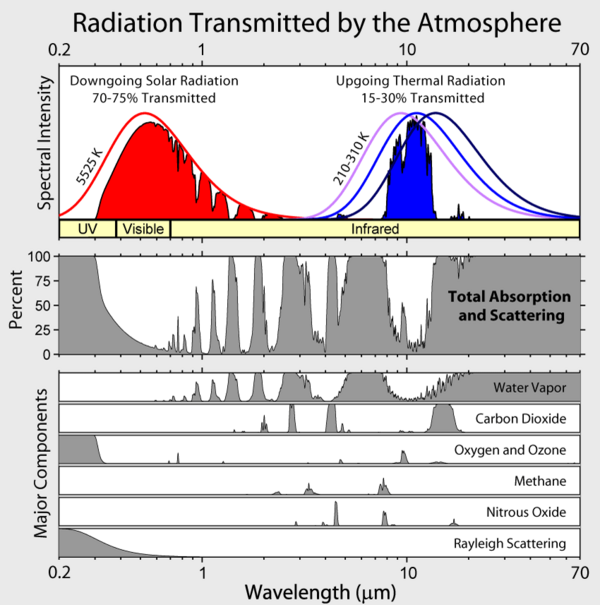 And, taking into account that the horizontal scale is logarithmic. I'd say that it is not that big of a coincidence.

Not the answer you're looking for? Browse other questions tagged optics electromagnetic-radiation atmospheric-science or ask your own question.

1
Why is air transparent?
0
How can we see through our atmosphere
2
Why do particular materials allow particular light waves to pass through them?
1
What is primary reason for a matter to be transparent as Cornea is?

13
Suntan: UV absorption vs daytime
2
Why is titanium dioxide transparent for visible light but not for UV?
71
Why is water clear?
1
How much of the Earth's atmosphere is visible from its surface
0
Prisms and light outside the visible spectrum
1
Why are transparent objects visible?
1
Are the blue/red colors of scattering visible only Because of the large size of the atmosphere?
0
Visible light as fraction of the EM spectrum