Can an object *immediately* start moving at a high velocity?

What I mean is, suppose a ball is fired from a cannon. Suppose the ball is moving at 100 m/s in the first second. Would the ball have started from 1m/s to 2m/s and gradually arrived at 100m/s? And is the change so fast that we are not able to conceive it? Or does the ball actually start its motion at 100m/s as soon as the cannon is fired?

Suppose a 40-wheeler is moving at the speed of 100 kmph. And it collides with a car and does not brake (The car is empty in my hypothesis ;-) ). If a body does not reach a certain speed immediately and only increases speed gradually, does that mean that as soon as the truck collides with the car, the truck momentarily comes to rest? Why I ask this is because the car is not allowed to immediately start at the truck's speed. So when both of them collide, the car must start from 0 to 1kmph to 2kmph and finally reach the truck's speed. Does this not mean that the truck must 'restart' as well? Intuition tells me I'm wrong but I do not know how to explain it physically being an amateur.

When is it possible for a body to accelerate immediately? Don't photons travel at the speed of light from the second they exist?

The answer to your question is "No" as this would require an infinite acceleration and hence an infinite force to be applied.
However to simplify problems it is sometimes convenient to assume an instantaneous jump in velocity as in the left hand graph. 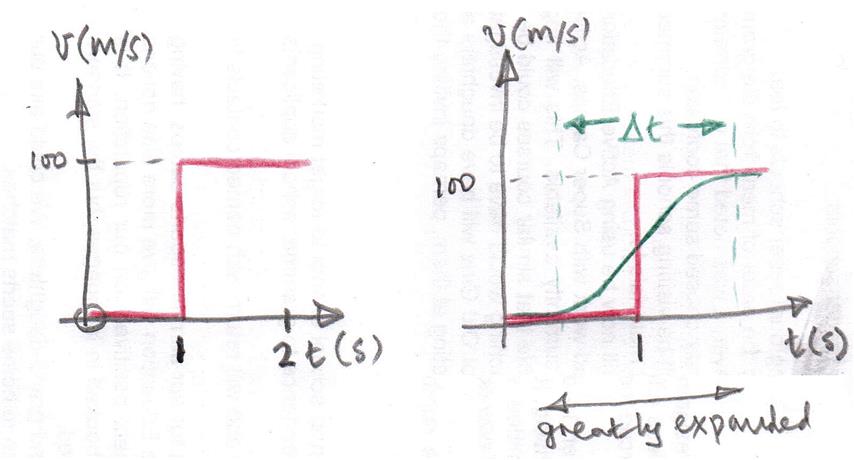 It might be that the actual change in velocity is as per the green line in the right hand graph but because the change in velocity $\Delta t$ takes place over such a short period of time, perhaps $\Delta t \ll 1$ in this example, the approximation to an "instantaneous" change has little bearing on the final outcome.

So every time you see a velocity against tine graph with some sort of "corner", where a gradient (= acceleration) cannot be found, you have to think that the corner is actually rounded but that rounding occurs over a very short period of time compared with the time scale of the whole motion it matters not a lot.

To answer this, one must understand how motion starts. The motion of the canon-ball starts due to force applied on it. The force directly does not lead to a high velocity. Force leads to acceleration, ie, change in velocity. So, the motion is dictated by

The change in velocity $\mathrm dv$ during the first moments (which is the question) depends on the infinitesimal time period $\mathrm dt$ you are considering. This time period can be arbitrarily small, and as the force $F$ is fixed, the change in velocity $\mathrm dv$ can be arbitrarily small too. So yes, the motion starts 'gradually', which is to say that the ball doesn't have $0$ velocity and then $100\ \mathrm{m/s}$ without reaching a velocity in between.

Note: We should technically be talking about changes in momentum, instead of velocity. If one adds quantum and relativity to the picture, the analysis becomes more complicated, and the question itself has no meaning in that scenario. I assume you only wanted to know about everyday 'canon-ball' situations.

For starters, any real object has a non-zero size. If you apply force to one side of a cannonball, it will start moving before the other side of the cannonball can be affected by that force. The time will be very small ("so fast that we are not able to conceive it") but nonzero. The cannonball will experience some compression, and in general (for reasonable energies) the propagation will be limited by the speed of sound in that material.

So even without even going to gradual acceleration (the main purpose of the cannon barrel - there's a reason why they're so long!), even a simple transfer of momentum by a single impact (e.g one Newtonian ball hitting another) isn't instant.

In classical mechanics immediately means "immediately", : all the energy transferred at t=0. (I should qualify this as the chosen answer demonstrates, since really t=0 cannot be reached but only approached as a limit, which can be infinitesimally small). A time lag from the firing to the transfer of all the forward momentum of the explosion will only depend on the time distribution of the whole explosive catching fire. This is statistical mechanics and depends on the density, type etc of the material that is being fired.

So there will be a small time lag before the projectile gets the whole front.

If one starts thinking of the quantum mechanical processes that generate the explosion there is an absolute lower limit to the time interval , given by the Heisenberg uncertainty principle in the form of $\Delta(E)\Delta(t)>\hbar/2$. This is in contrast to the classical case. The HUP is fulfilled within the constraints of the classical explosion energy transfers.

If we want a quick solution to a) how far the ball went, b) what's its exit velocity from the cannon, etc. then we can assume that the ball left the cannon at 100 m/s. Its velocity's x-component can be assumed to be constant, with only the y-component changing due to gravity (e.g., the $v_y = 0$ at the top of the ball's trajectory, but is greater than zero otherwise).

However, if we want to be more picky and realistic, then no the ball does not go from 0 m/s to 100 m/s in 0 s. It may get there quickly, but we must obey ideas such as inertia and impulse. For example, the impulse equation can be written as $F \Delta t = m \Delta v$. If the change in time is zero, then we can't have any change in velocity (meaning going from 0 velocity to some non-zero velocity).

It is certainly true that the acceleration is not instantaneous and occurs over a period of time, as already covered by a number of other answers.

One interesting result of this gradual acceleration that occurs within the barrel that can be observed is that increasing the barrel length results in an increase in the muzzle velocity of the projectile.

For example, this chart of muzzle velocity versus barrel length describes the issue clearly. The bullet is being constantly accelerated by the expanding gases from the deflagrating propellant, and therefore increasing the barrel length (and therefore increasing the time of acceleration) results in a higher muzzle velocity experienced by the bullet.

1
How do I explain that there is no instantaneous velocity at a sharp turn?
27
Is there a maximum possible acceleration?
13
Does a photon instantaneously gain $c$ speed when emitted from an electron?
3
Which derivative of $s(t)$ can be discontinuous in an idealized world of physics?
1
Instantaneous changes in acceleration
6
Is acceleration continuous?
0
About the discontinuity of tension

5
Will a ball thrown straight up in a train land in same spot (in real world)?
2
Throwing an object with air resistance
1
What is an object's velocity with zero acceleration after positive acceleration?
0
Effect on speed when decreasing the magnitude of acceleration
1
Flight time of spherical bullet fired horizontally versus dropped vertically / effect of crosswind on spherical car
0
A problem related to 2D Motion
0
How much more fuel to double the speed?