How is the combination of electric & magnetic waves (electromagnetic wave) illustrated as a single wave?

This is the common presentation of an electromagnetic wave:

But it can also be shown as a single wave with a single defined wavelength & amplitude : 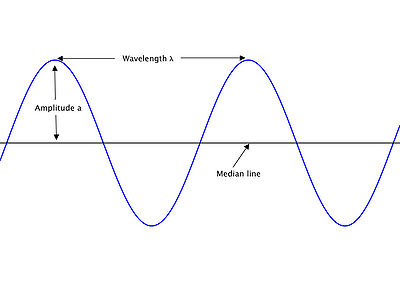 I know that the wavelength shown above represents that of E & B fields (which are equal); so what about the amplitude?

The first diagram shows the values of E(t) & B(t) versus the direction of propagation; what does the second diagram show? (Does it show anything at all or is it only for simplification?)

How the polarization (or the electric field) alone could give enough information about the electromagnetic wave?

where $c$ is the speed of light in vacuum. At every instant, the ratio of the electric field to the magnetic field in an electromagnetic wave equals the speed of light ( provided our wave is travelling through vacuum; otherwise it will be $v$, the velocity of light through a particular medium). This came as a consistency requirement for the solutions to Maxwell's equations to be valid. In vectorial form, the above result is given as

Hence once known the strength of the electric field and the polarization direction, there are information hidden regarding it's velocity in that medium and the magnetic field. Hence by this way you can represent the three dimensional monochromatic wave using a two dimensional diagram connecting the electric field strength and time (or distance). It's just a matter of simplification.

Not the answer you're looking for? Browse other questions tagged electromagnetism visible-light waves electromagnetic-radiation or ask your own question.