Why doesn't Ampère's law hold for short current carrying wires? Of course, such wires should be part of a closed circuit, but that's a physical fact, and there is a numerous amount of ways to close it. Ampere's law, on the other hand, is merely a mathematical law.

The problem is Ampère's law can't really "tell" the difference between infinite wires and finite wires. Such law states: $$\oint \mathbf{B} \cdot d\mathbf{l}=\mu_0I$$ As far as I know there is no restriction on the integration curve as long as it is closed. Then I could pick a circle away from the wire, centered at its axis, oriented in its direction. The integral then only depends on $\theta$, and $\mathbf{B}$ comes out because it does not (there is azimuthal symmetry). With this logic (which is evidently flawed), $\mathbf{B}$ is the same regardless of its wire axis coordinate (which is true for an infinite wire, but not in this case). My assumptions here were:

To finish, in Griffith's Introduction to Electrodynamics (4th ed., p. 225) the author derives a formula for a finite straight current carrying wire using the Biot-Savart law:

This is only the magnitude. But above, he writes: 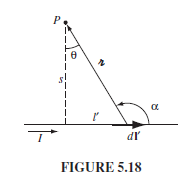 Which, by the azimuthal symmetry of the problem, implies that the magnetic field goes in the azimuthal direction. That would leave assumptions 3 and 4 as the sources of the absurdity.

There is no such thing as a "finite, open line current". If you did have such a thing, the ends of the line segment would accumulate charge at a linear rate, and you are no longer on a static situation, and you can no longer apply the magnetostatic Ampère's law.

This isn't being nit-picky, either, because you need the current to obey the continuity equation in order for Ampère's law to even make sense. This is most cleanly stated in the integral version with a volumetric current density $\mathbf J(\mathbf r)$, for which Ampère's law reads $$ \oint_\mathcal C \mathbf B\cdot\mathrm d\mathbf l = \mu_0\int_\mathcal{S} \mathbf J\cdot \mathrm d\mathbf S, $$ for any closed curve $\mathcal C$ and any surface $\mathcal S$ whose boundary is $\mathcal C$. For this to be true, you require the integral on the right to be independent of the choice of surface, and by the standard argument this is equivalent to requiring that the flux of the current density out of any closed suface be zero: $$ \oint_\mathcal{S} \mathbf J\cdot \mathrm d\mathbf S=0. $$

This requirement fails for a current-carrying finite line segment, because the current flowing into a sphere about either end of the segment is nonzero. For such a current, then, Ampère's law makes no sense.

(Since you explicitly mention the differential form of Ampère's law, here goes that version of the argument: you have $\nabla \times \mathbf B = \mu_0 \mathbf J$, so therefore $\nabla \cdot \mathbf J = \nabla \cdot(\nabla \times \mathbf B) \equiv 0$, and $\mathbf J$ obeys the differential stationary continuity equation. There is no way to reconcile this with a finite current-carrying segment.)

So where does this leave the current-carrying line segment? It's a really neat concept, and it mostly doesn't lead us astray, so what gives?

For such a circuit, it is convenient to split the field up into components, defined as $$ \mathbf B_n(\mathbf r) = \frac{\mu_0}{4\pi} \int_{\mathcal C_n} \frac{I\mathrm d\mathbf l \times(\mathbf r-\mathbf r')}{\|\mathbf r-\mathbf r'\|^3} , $$ and which we interpret as the field produced by the individual segment $\mathcal C_n$. However, these fields are completely in our heads: there are no physical current configurations that produce the $\mathbf B_n(\mathbf r)$, and there is no way to make sense of them beyond the Biot-Savart law (and certainly no way to make sense of them using Ampère's law).