What makes '$c$' $c$? And what if it was slightly different? [duplicate]

I was thinking about what would be necessary to change to have a different value for $c$ (speed of light in vacuum, or speed of anything massless, or the one that seems most fundamental to me: he maximum speed of 'making stuff happen elsewhere').

And, if $c$ was different, what that would change about the universe?

My initial question was: Is there a plain English explanation for why the speed of light (or the speed of causality?) is related to these two properties, and why it's inversely proportional to how easy it is to magnetise free space and to how difficult it is to create an electric field in free space? (Or, do you just have to do the maths?!)

(With a slightly hurty brain I wondered if a comment from Emilio's link answered this: "The stiffer the [medium] is (more energy to squeeze), the faster the wave. The more inertia, the slower the wave")

BUT as PM2Ring explained below, $c = {1}/{\sqrt{\mu_0\,\epsilon_0}}$ is just the way that EM waves behave in the universe, so this original question of mine was flawed from the outset.

Part 2 of my question was if $\mu_0$ and $\epsilon_0$ were different and $c$ was slightly larger/smaller), what would the universe look like? And would the wheels fall off the apple cart if that were the case? Would I still be here to ask this question? (Ie, specifically thinking about $\mu_0$ and $\epsilon_0$, but now that i know they are not what defines $c$, that question is also moot.) I do think it's an interesting creative exercise to image a universe with $c$ = a million times as fast, or only the speed of a cart horse, though!

And as for why $c = c$, the best answer might be it's a fundamental part of our universe, and no-one knows why that's the case.

If those answers look right, I'll change this to question answered.

Historically, we first encountered $c$ as the speed of light in a vacuum, and Maxwell's $c = {1}/{\sqrt{\mu_0\,\epsilon_0}}$ shows that $c$ is invariant. But something having an invariant speed doesn't make sense under Galilean relativity, and physicists from Maxwell onwards tried to resolve that difficulty on the basis that it was something to do with electromagnetism.

That was a reasonable approach to take because (as far as they had observed) relativistic effects only appeared in connection to electromagnetic phenomena. Eventually Einstein realised that electromagnetism was a red herring, and that those weird deviations from Galilean relativity could be simply explained by assuming a fundamental connection between space and time that had not been previously expected. In other words, the relativistic weirdness happens whenever sufficiently high speeds are involved, it's not due to the electromagnetic nature of light and electrons.

In special relativity, Einstein introduced the notion of the spacetime interval between two events. This is an invariant quantity for all inertial observers, and it is given by the equation

where $\Delta r$ is the spatial separation between the two events in some inertial frame, $\Delta t$ is the time interval between them in that frame, and $c$ is (of course) the speed of light. Observers in different frames will measure different values of $\Delta r$ & $\Delta t$ between 2 given events, but they will all get the same value when they calculate the $s$ between those 2 events.

An important implication of this is that what is a purely spacelike interval to one observer (i.e. $\Delta t = 0$) will be an interval with both space & time components to another observer moving at non-zero velocity with respect to the first observer. And of course the same thing can be said about a purely timelike interval.

So in special relativity $c$ is fundamentally a scaling factor that relates pure time-like intervals to pure space-like intervals. And with appropriate choice of units we can set $c = 1$ (as anna v describes in her answer), so the above equation simplifies to

These equations basically say that although space and time are fundamentally different, the magnitude (size) of a spatial interval of one light-second is the same as the magnitude of a temporal interval of one second. When drawing spacetime diagrams we typically use natural units where $c = 1$ so an interval of 1 second has the same length in the diagram as an interval of 1 light-second, and the path of a photon will always be at 45° to the space and time axes. If we use a non-unitary value for $c$ the cells of the spacetime grid get squashed. :)

So of your 3 "definitions" of $c$ (speed of light in vacuum, or speed of anything massless, or max speed of 'making stuff happen'), the last one is the more fundamental, but even more fundamental is to think of $c$ as the "slope" of spacetime.

Because observers moving at different velocities disagree on what's a purely spacelike or purely timelike interval they will naturally disagree on what's the magnetic component and what's the electric component of an electromagnetic field, which brings us back to Maxwell's equations. So $c = {1}/{\sqrt{\mu_0\,\epsilon_0}}$ isn't really a defining equation for $c$, it's simply expressing the relationship between the magnetic component and electric component of the electromagnetic field in spacetime.

But why does spacetime have the particular slope that it does? We don't know! Of course, in natural units it has a slope of 1, even if we lived in a universe that was different to this one, but that's just weaseling out of the question. :)

It so happens in the universe we find ourselves that three basic units can define all other units. They correspond to space time and mass, in the original unit systems, if one defines a unit for space (distances),mass, and time, everything else measured can be expressed in these units.

This led to the so called "natural units" where one chooses to set three basic constants, i.e. constants which are basic to the mathematical models developed to describe data/measurements, to 1 and simplify the maths. 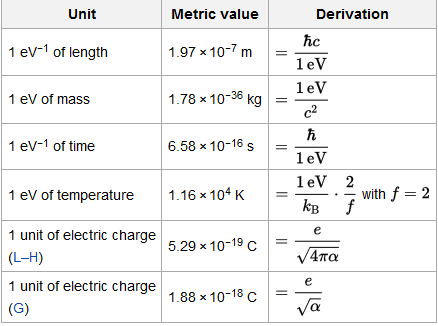 If this equality relationship were broken the theories would give different predictions and if broken too much life as we know it would not exist.

Why the constants are such that the theories fit the data belongs to the set of "whys" that physics cannot answer. Physics develops mathematical models which show us "how" nature acts. The answer to "why" can be explained within a model with "how" one goes from one set of equations to another. But such basic "whys" cannot be answered within the models except with "because this fits what we have observed'.

Not the answer you're looking for? Browse other questions tagged speed-of-light physical-constants anthropic-principle or ask your own question.

12
The origin of the value of speed of light in vacuum
21
Why do universal constants have the values they do?
18
Why does the speed of light $c$ have the value it does?
29
Is it possible to speak about changes in a physical constant which is not dimensionless?
7
How many seconds are a meter in the 4th dimension?
9
Speed of gravitational waves vs speed of light
10
Why does speed of light have to be constant?
7
Is this statement about the impact of the fine-structure constant accurate?
6
Could the speed of causality be (significantly) faster than $c$?
0
Do special relativity phenomena still happen when there is no light?
See more linked questions

25
Deriving the speed of the propagation of a change in the Electromagnetic Field from Maxwell's Equations
14
Has the speed of light changed over time?
0
Zero uncertainty constant and a unit change
9
Why should gluons move at a speed determined by $\mu_0$ and $\varepsilon_0$?
0
What does the $k_e$ in Coulomb's law and $G$ in Newton's Universal Gravitation Law mean?
1
Coulomb's Constant