Are refractile and translucent synonymous? How can I differentiate them physically? I think so because practically I am unable to perceive any difference between them.

Are refractile and translucent synonymous? How can I differentiate them physically? I think so because practically I am unable to perceive any difference between them.

I would have to say they are not synonymous, and that they describe entirely different physical properties of light.

In the field of optics, transparency (also called pellucidity or diaphaneity) is the physical property of allowing light to pass through the material without being scattered. On a macroscopic scale (one where the dimensions investigated are much, much larger than the wavelength of the photons in question), the photons can be said to follow Snell's Law.

Translucency (also called translucence or translucidity) is a super-set of transparency: it allows light to pass through, but does not necessarily (again, on the macroscopic scale) follow Snell's law; the photons can be scattered at either of the two interfaces where there is a change in index of refraction, or internally. In other words, a translucent medium allows the transport of light while a transparent medium not only allows the transport of light but allows for image formation [my emphasis] . The opposite property of translucency is opacity. Transparent materials appear clear, with the overall appearance of one color, or any combination leading up to a brilliant spectrum of every color. 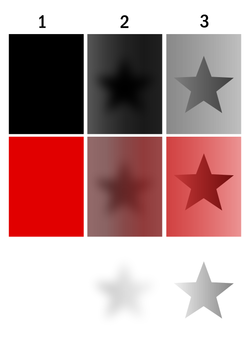 Comparisons of 1. opacity, 2. translucency, and 3. transparency; behind each panel is a star

Refraction is the change in direction of propagation of a wave due to a change in its transmission medium. Refractile refers to a medium capable of refraction.

The phenomenon is explained by the conservation of energy and the conservation of momentum. Due to the change of medium, the phase velocity of the wave is changed but its frequency remains constant. This is most commonly observed when a wave passes from one medium to another at any angle other than $0^°$ from the normal. Refraction of light is the most commonly observed phenomenon, but any type of wave can refract when it interacts with a medium, for example when sound waves pass from one medium into another or when water waves move into water of a different depth. Refraction is described by Snell's law, which states that, for a given pair of media and a wave with a single frequency, the ratio of the sines of the angle of incidence $θ_1$ and angle of refraction $θ_2$ is equivalent to the ratio of phase velocities $(v1/ v2)$ in the two media, or equivalently, to the opposite ratio of the indices of refraction $(n2 / n1)$: 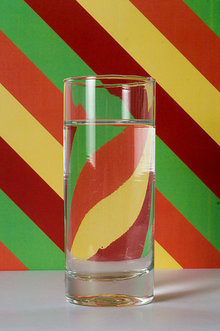 Refraction in a glass of water. The image is flipped.

7
Difference between Scattering and Fluorescence
8
What is the difference between the words transparent and translucent?
0
Theoretically, is it necessary that if light passes through a glass slab, its intensity should decrease?
1
Are RGB LED's only capable of producing three colors of light? What about all the other colors?
2
Understanding the terms translucent vs. transparent
1
How do cone cells perceive the wavelength of light waves?
1
Understanding the color of fluorescent and non-fluorescent objects
0
Is light a 3-dimensional wave?And how is that measured?