In a recent experiment in my physics class, we were given the task of finding the experimental rotational moment of inertia in a T-stand with two masses attached to the ends of a certain length. I have drawn a diagram below with the hopes of aiding in the understanding of the problem: 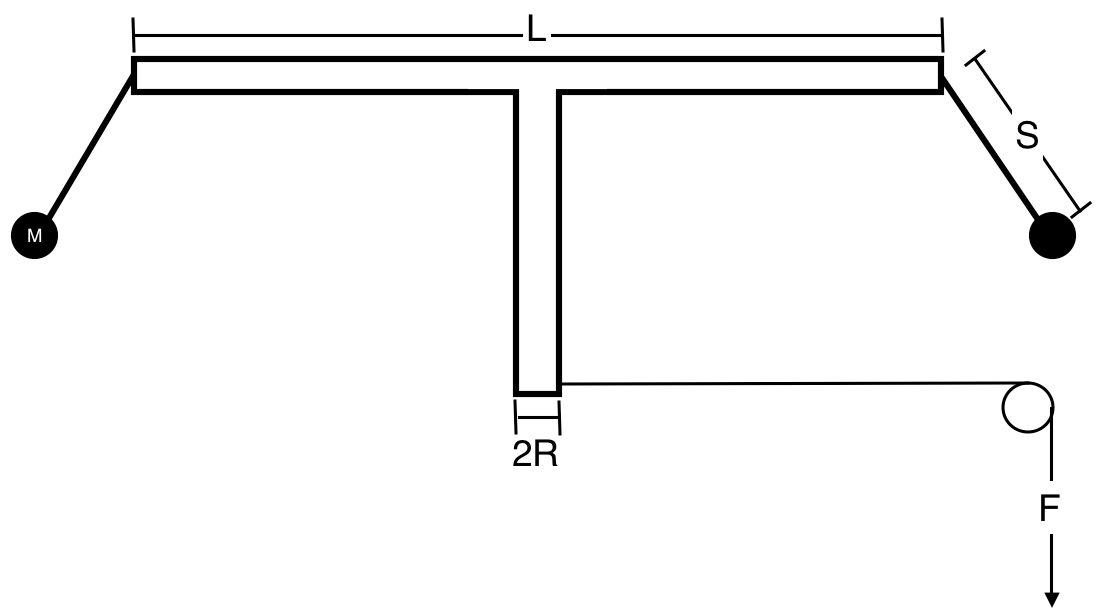 As you can see, I have two point masses hanging off the ends of the T-stand of identical mass M with identical string length S. Mass is distributed uniformly within the T-stand. I am applying a force F tangentially to the edge of the bottom of the T-stand, for which the radius is R.

We were directed as a class to consider that centripetal acceleration as a constant and the tension force as though it only moved in the upward and inward directions. It was then that I made the mistake of pointing out that making these assumptions would not result in accurate data, as we were varying the torque applied to the T-stand. My physics teacher knew that I already had experience with three-dimensional vectors (though very limited) and understood that position (as we had seen it so far) was only the second-degree polynomial of an infinite Taylor series. It was then I was instructed to "go and see if you can figure it out".

The issue of centripetal jerk is apparent when considering the movement of the masses as the F is constant, implying a tangential acceleration. The equation for centripetal acceleration assumes a constant rotational velocity, which this does not have. Thus, we cannot use $a_c = ωr$ (where ω is a constant), but its derivative, $j_c = αr$. Furthermore, the rotational moment of inertia is also increasing with no change in torque applied; thus, angular acceleration is also approaches 0 as time approaches infinity. We cannot even consider centripetal jerk; instead, we must consider centripetal snap: $s_c = ζr$.

Here is what I know so far about the tension vector and the string associated:

Where xS, yS, and zS are proportionally related to the force vectors:

Other misc. knowns (I hope):

So far, I believe that my interpretation of the fourth-degree polynomial of position. However, relating the three tension vectors in a way that makes any sort of sense becomes my issue.

I cannot figure out how to relate each vector direction. I know that, as my pointmass is pulled upward and inward by the tension, the radius from the axis of rotation increases for the pointmass, thus increasing the angular acceleration and therefore the tension force along the y-axis is increasing. I know that the tension force along the x-axis also increases, as the x-component distance is becoming larger and therefore increasing the centripetal force. I do not know how to relate the z-axis with other two axes. Here in lies my main issue: relating my tension force components to the variables listed above.

(full disclosure: I am in AP Physics C with prior AP Calc BC knowledge as well as the beginnings of 3D vector calculus, so if a higher-level calculus is used (I know that tensor calculus might be involved?), please link me to a source that can give me fundamentals of the mathematics necessary)

The issue of centripetal jerk is apparent when considering the movement of the masses as the F is constant, implying a tangential acceleration. The equation for centripetal acceleration assumes a constant rotational velocity, which this does not have. Thus, we cannot use $a_c=\omega r$ (where $\omega$ is a constant), but its derivative, $j_c=\alpha r$.

You really are starting from the wrong premise here.

The equation for centripetal acceleration does not assume a constant rotational velocity at all.

You're applying a constant torque $\tau$:

Of course that means that $\omega$ evolves with time:

This problem involves no angular jerk.

If the masses $m$ are mobile then the inertial moment of one mass is (consider it a point mass): 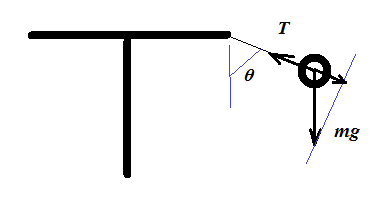 I think the problem (of finding how the moment of inertia of the apparatus varies with time) is far more difficult than you imagine. Also, as I said in my 1st comment, I think it is not worthwhile trying to solve it. It is a wild goose chase. It does not make much sense to try to measure something which changes as you measure it.

It would be difficult enough if this were a static problem, with constant angular velocity and constant moment of inertia. The balls would then make a constant angle $\theta$ with the vertical, and they would be in the same plane as the cross-piece on the 'T'.

But this problem is a dynamic one. Angular velocity $\omega$ is increasing, so the balls will swing upwards/outwards in the plane of the 'T' and also 'backwards' out of this plane, as I think you realise. The moment of inertia increases in a very complex manner.

Furthermore, the force $F=M(g-\ddot y)$ is not constant because $\ddot y=R\dot \omega$ may change as moment of inertia increases. (Here $y$ is the vertical position of the falling mass, measured downwards.)

So the dynamical equation of motion will be very difficult to derive, and probably can only be solved by numerical analysis.

I think the simplest way in which you can get something out of the experiment is to remove the balls (or fix them in place so that they cannot move) and measure only the fixed moment of inertia of the 'T'. Call this $J_0$. The falling mass $M$ should then descend with uniform acceleration $\ddot y$. This situation is far easier to analyse. If you plot a straight-line graph of $g/\ddot y$ against $1/MR^2$ the slope is $J_0$.

This is a bit too late but I can answer this question. Even though there is an acceleration in the system, the radius is fixed so the centripetal acceleration will still be omega^2r. The velocity vector of circular motion is always tangential to the trajectory, so the change in speed should be due to an acceleration vector in the same direction. That means the total acceleration would be -omega^2r.(er) + dv/dt.(et), where (er) and (et) are unit vectors in the radially outward and tangential directions respectively (please pardon me for the notation, I'm typing this on my mobile, will change it when I get time). Because the total acceleration is a vector sum of tangential and radial vector, it will not be pointing towards the centre.

This is very nicely explained in Chapter 7 of the book "Concepts of Physics - Vol. 1" by HC Verma.

I'll still give a short derivation.

Not the answer you're looking for? Browse other questions tagged rotational-dynamics rotational-kinematics centripetal-force moment-of-inertia jerk or ask your own question.

1
Centripetal force and circular motion
0
Understanding work with rotational momentum/moment of inertia
1
Rolling motion of a rigid object
2
Kinematics for Non-Uniform Circular Motion
0
Banked Corners and Centripetal Forces Question
0
Rotating conical pendulum and the centrifugal force
2
Would this be a correct explanation on denser molecules end up further away from axis of rotation in a centrifuge?
0
Does an object performing a uniform circular motion rotate even when there is no angular acceleration?