Why does the Pauli exclusion principle not apply to bosons?

The Pauli exclusion principle states that two fermions cannot have the same quantum state simultaneously, but why does this not apply to bosons with whole integer spins?

This is a legitimate question but one for which you probably won't get any real, satisfying answer rather than just "because that's how nature works".

You can "derive" the impossibility for two fermions to have the same quantum numbers from the requirement for many-fermion states to be antisymmetric with respect to the exchange of any two particles, that is, $ \lvert \psi_1 \psi_2 \rangle = - \lvert \psi_2 \psi_1 \rangle,$ and show that there is a connection, given by the spin-statistics theorem, between spin and symmetry of the wavefunction, so that half-integer spin particles must be antisymmetric like in the above case. But then again, this is not really an answer to the "why" question, as it is just an equivalent way to formulate the exclusion principle.

Said in other words, there are no underlying or "deeper" principles or theories that can "explain" Pauli's principle from other more foundamental assumptions (yet?). When in physics you start asking a "why" question (like, why do magnets attract each others?), eventually you will inevitably find yourself in this situation, where the only possible answer you are left with is: "because that's how things work".

If you define a boson as a integer-spin particle then you must see the spin-statistics theorem.

It states that the integers spins particles' wave function does not change if you swap the two particles, meaning $\Psi(1, 2)=\Psi(2, 1)$. We can write $\Psi$ using the bra notation (the first ket being of particle 1 and the second one of particle 2): $$\rm \Psi=|state\; of\; particle\;1\rangle |state\; of\; particle\;2\rangle$$ If the two states are the same, say $|\alpha\rangle$ ($\alpha$ is the label of the state), when I invert the two particles $\Psi$ does not change as the two bras are equal!

This is just my take on the pauli principle. If you have heard of the anthropic principle, it states that the conditions and laws of physics are such that it would allow human existence...meaning ....if the laws were something else (read no pauli exclusion principle) then life forms would not exist.

Just as a side note, we also dont know 'why' there is lenz's law which states that a conducting loop resists change in flux......and there are many more such examples. Physics is hugely empirical; we go out, poke anthills, see what happens, write stuff down, try to predict things using theories and laws, if it doesnt work, we collect more data, refine theories and do the same thing again. Spin statistics theorem and quantum mechanics itself was a huge leap of faith and we design the mathematics around the principles that we observe in nature. Hence, using QFT and math to answer a very fundamental question like yours is like explaining science to religious people using scientific laws.

For those disagreeing fervently at the very appearance of the name of anthropic principle, see here. Even Professor Weinberg gives that as an explanation (to the problem of cosmological constant). Also, lookie here just to confuse yourself a little more; it is actually very enlightening, i learnt something. Hell, even stephen hawking thinks intelligent design is highly probable here. All i am saying is i dont know if everything is ultimately explicable by physical theories alone and there are very well respected brains who think so too. Having said that, i of course do not think we should stop looking to solve problems and attribute every inexplicables to anthropic principle and intelligent design. We need to know when to stop and when to push.

Why does the Pauli exclusion principle not apply to bosons?

Because a boson such as a photon has an E=hf wave nature, and two waves can be superposed. For a example you can grasp intuitively, think of two ocean waves. They can ride over one another and keep going, no problem. Two waves can overlap.

The Pauli exclusion principle states that two fermions cannot have the same quantum state simultaneously, but why does this not apply to bosons with whole integer spins?

As above. The real question of course is why does it apply to fermions? When they have a wave nature too? We can diffract electrons. The answer is because a fermion such as an electron has a spin ½ nature, such that its electromagnetic field is not totally unlike the "vortex" of gravitomagnetism: 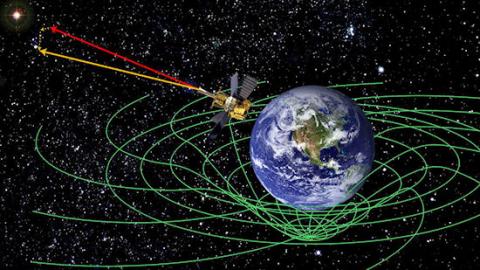 For a example you can grasp intuitively, think of two whirlpools. Two whirlpools cannot overlap.

Not the answer you're looking for? Browse other questions tagged quantum-mechanics pauli-exclusion-principle spin-statistics or ask your own question.