Suppose a solid, right-circular, cylindrical body has a long axis of length $L$ and end-faces each having a diameter $D$ was placed fully submerged into a fluid having a hydrostatic pressure of $p$, as shown in the figures below. 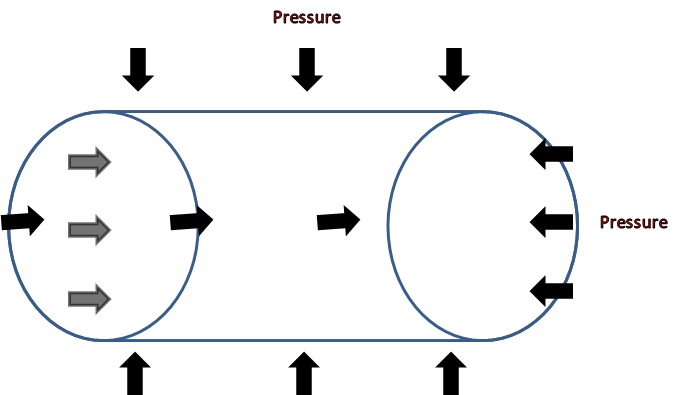 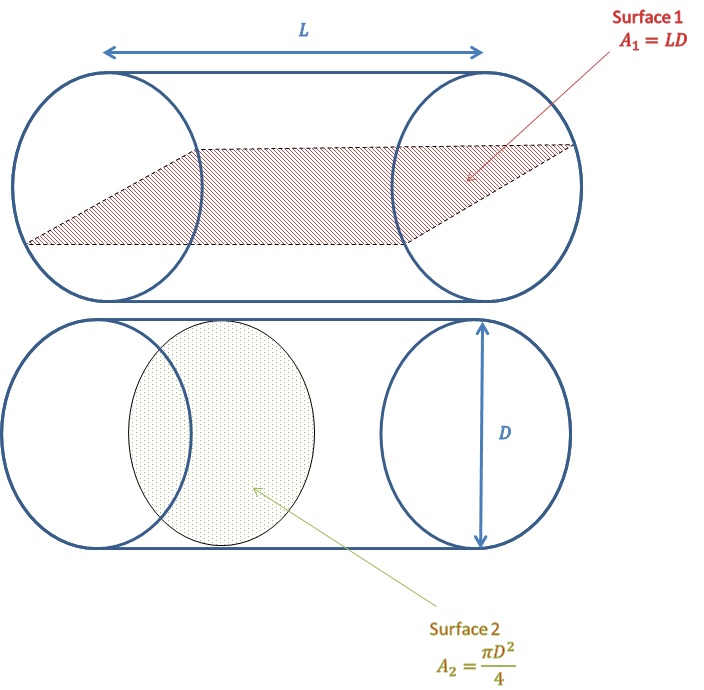 At first thought, if the confining fluid pressure acting on the cylinder's outer surfaces is hydrostatic, then I would think the resulting stress induced within the cylinder's body would be isostatic. However, would this be true for any length $L$ to end-face diameter $D$ relationship? How might one show the resulting axial (along the cylinder's long axis) and lateral (or radial-direction) internal stress using a free body diagram?

My attempt at this is as follows. For Surface 1 I can imagine the resulting internal forces having to counter act the normal forces $F_n$ acting on the plane caused by the external pressure. I might show this using the figure below. 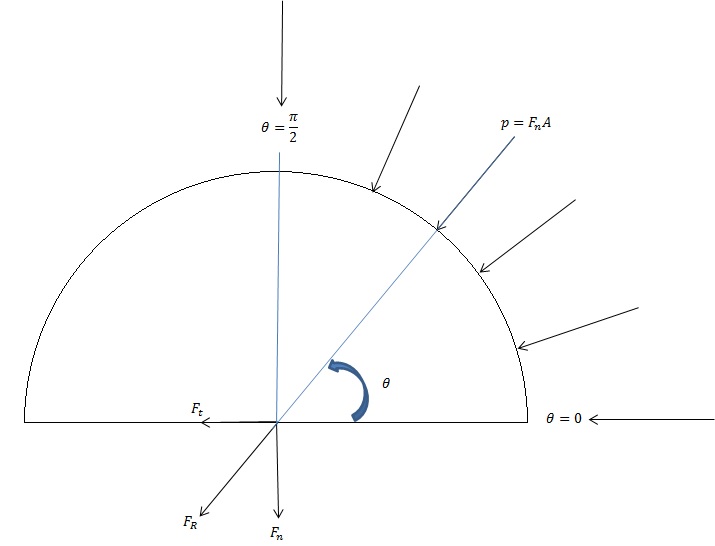 Assuming some infinitesimal area for the external pressure to act on, I would think I could find the force acting on Surface 1 by first integrating the pressure force acting on the quarter-circle and then multiplying by 2 and then by the length of the cylinder $L$, i.e.,

Since pressure is force over area, $F_R$ is equated to pressure in the following manner

where $\left(\frac{\pi D}{2}\right)$ is the arc-length of the half-circle. Substituting, we solve for the stress acting on surface 1,

Therefore, the cylinder's length to diameter stress relationship might be said to be equal to

Based on @Sammygerbil's suggestion, I continued to work on this problem, checking my calculation. With more internet & resource searching I found the correspondence and answer by user @Jared (here) to be most helpful. Following his answer, we can determine the amount of force acting on Surface 1 due to the confining pressure. Using the cartoon below we can more easily visualize the problem. 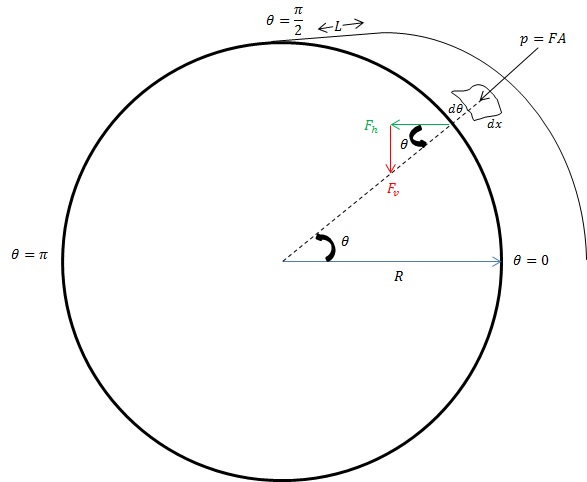 Since the fluid's pressure force acts normal to the surface on which it acts and the surface it acts on is curved, there are two directional components of the resulting force in relation to Surface 1: a force parallel to Surface 1, denoted as $F_h$ (h for horizontal), and a force orthogonal to Surface 1, denoted as $F_v$ (v for vertical). The vertical component of the differential force is proportional to the $\sin$ of the angle $(\theta)$ between the centerline axis of Surface 1 and the direction of the differential force. This can be written mathematically as,

where $R$ is the radius of the cylinder and $dx$ is the differential length along the cylinder's long axis. Substituting equation 3 into equation 2,

we now have an equation of differential force as a function of location on the cylinder's lateral surface. Integrating from $0$ to $\pi$ and from $0 \leq x \leq L$ gives:

The area of Surface 1 is $DL$ which is equivalent to $2RL$. Therefore, the stress at Surface 1 is

Thus, the resulting stress induced within the cylinder's body is indeed isostatic and this is true for any length to end-face diameter relationship.

Not the answer you're looking for? Browse other questions tagged homework-and-exercises forces free-body-diagram stress-strain solid-mechanics or ask your own question.

4
Wall stress of a hexagonal pressure vessel
0
Why don't we take into account the width contraction of the wire in calculating the stress strain relationship for a stretched wire?
3
How does stress change through a bar that sharply increases in diameter?
5
What is the purpose of the Maxwell Stress Tensor?
2
Force acting on the surface during aspiration of elastic body into the pipe
1
Stress in a cylinder with no internal pressure
1
Why is the partial derivative of strain energy function with respect to strain equal to stress
1
Why is the stress different when different methods are used?