When is the most reasonable height at which the rocket uses its thrust for two seconds? (By the way, we ignore the loss of mass due to the use of the thrust.)

I solved the question, but I'm not satisfied. I don't quite understand it intuitively.

Someone said $W = Fs$, and since $F$ (thrust) is the same, when $s$ (distance moved) is the greatest, the work done by the thrust, to counteract gravity, would be the greatest. Therefore, the most reasonable height to start using the thrust is when the height at which the rocket would end using its thrust is when it reaches the ground (the calculation to find the actual value of the height is very complicated, so I'll skip (it's not the main point of my question).

Can anyone please help me why I may be wrong?

It is possible to use law of conservation of energy to understand what is going on here. But simple arguments such as "chemical energy opposes gravity" would not help.

So the fuel was burned, it's chemical energy is released. The amount of energy released is the same no matter if fuel was burned in the beginning or in the end of the flight. Where did this energy go?

We want to make $E_3$ as small as possible (making it negative would be nice: that would mean that kinetic energy of the rocket has decreased).

$E_1$ does not depend on when the fuel was burned.

The rocket engines throw gas with some velocity $V$. If the velocity of the rocket is $v$ than the change of gases kinetic energy would be:

See? The greater the speed $v$ of the rocket the more kinetic energy gains the gas when rocket's engines throw it forward with additional speed $V$!

With this sort of problem it is often worth sketching a velocity against time graph. 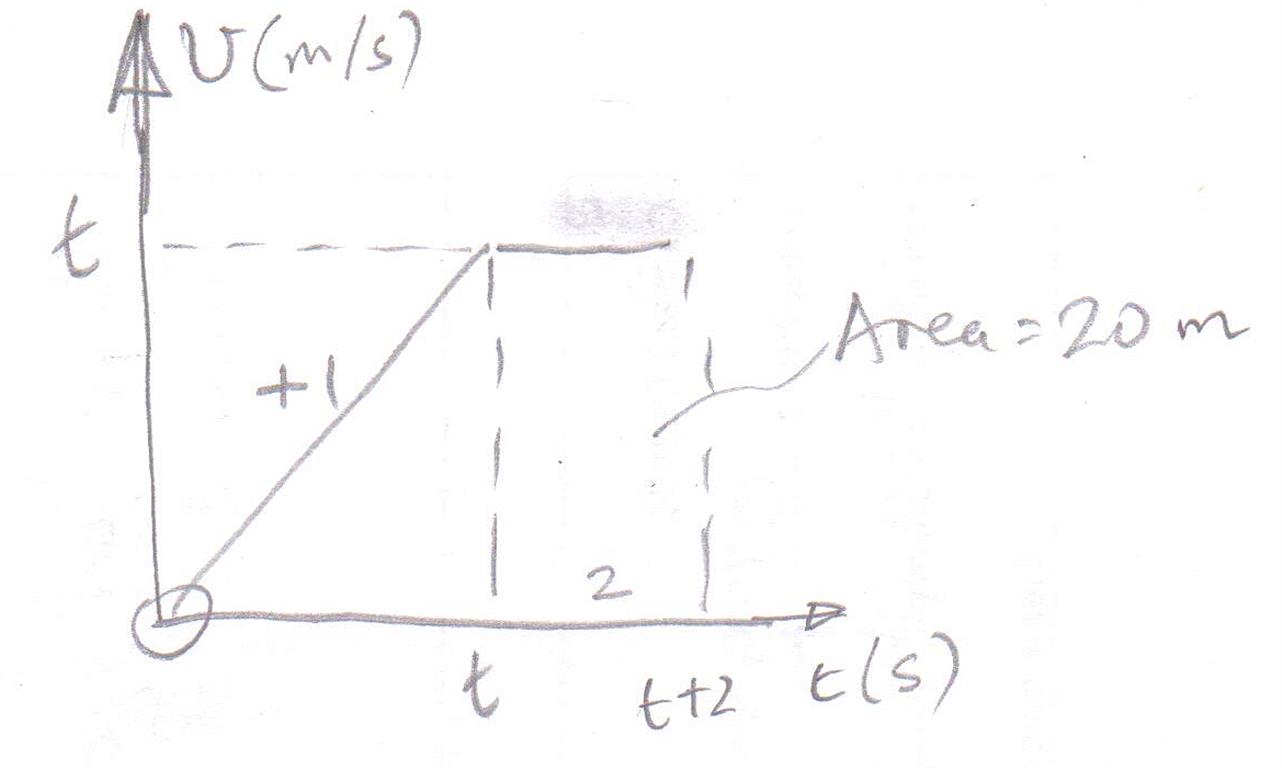 The constraints are that the rocket has to travel $20$ m, will accelerate at $1$ ms$^{-2}$ and with the thruster on the rocket will descend at constant velocity.
So the trick is to get the rocket to fall as far as possible when its thruster is on as is shown in the diagram below.

Also, in a realistic scenario, the impact velocity might be zero as the weight of the rocket would reduce with the fuel being used up.

To minimise the impact speed, there are two ways to think about this:

Assuming the goal is to minimise impact speed then you should time your burn so that it ends when you land.

Why? because all the time you are in flight you are gaining speed due to gravity. Burning earlier makes your flight longer and thus increases your impact speed.

You're right that the total energy will always be conserved. But in this type of problem, you're not given a fixed amount of energy to use, instead you're given a fixed amount of impulse (force multiplied by time). In effect, the efficiency (how much change in energy it produces) of the rocket is changing, depending on when it is used. If the rocket is used when the ship is traveling quickly ($v$ is large), then it works more efficiently to slow the ship down.

Not the answer you're looking for? Browse other questions tagged homework-and-exercises newtonian-mechanics rocket-science or ask your own question.

7
Will a rocket produce more thrust if fired in air, rather than vacuum?
5
Trying to modify the Tsiolkovsky rocket equation for the real world
0
Calculate rocket trajectory
3
Is a rocket engine most efficient when its velocity is equal to the exhaust velocity?
0
Calculating Rocket Engine Power from Force and Burntime