What happens to the Weak Interaction after Electroweak Symmetry Breaking?

I believe you're mistakenly thinking that we have a theory (electroweak theory) that works above a 'certain scale' and then below that scale that theory goes out the window, leaving us having to define a new theory. electroweak theory is always the same, it is a unified framework for the observed electric and weak forces. It is based on the gauge group $SU(2)\times U(1)_Y$. (Y is hypercharge).

Let's see if I can explain without writing long equations and entering into much technicalities..

A theory is given by writing down a Lagrangian. This will contain several fields: in our case fermion matter fields, gauge bosons fields for the above symmetry group, and a Higgs field. Initially this lagrangian is invariant under local $SU(2)\times U(1)_Y$ symmetry transformations. Under some special scale you mentioned the symmetry is broken really just because we have had to redefine what are the physical fields in the electroweak lagrangian for some reason. (I'll explain this better below, but leaping ahead this is, loosely speaking, because the system as a whole has collapsed into a new state). So the lagrangian is rewritten in terms of the new fields and written in this new way the lagrangian is no longer invariant under gauge transformations: 'the symmetry has been broken'. In our case $SU(2)\times U(1)_Y$ breaks down to $U(1)_{EM}$ which is related to good old electromagnetic gauge theory. In the mean time however in our redefined lagrangian we have new interaction terms involving what was 'left over' (in our redefinitions) by the gauge boson fields of the bigger $SU(2)\times U(1)_Y$ group. These are now identified with the $Z, \:W^{\pm}$ bosons. The interaction terms involve products of these fields and matter fields. Assuming you know enough about Feynman diagrams, you'll know that interaction terms of this kind in the lagrangian amount to processes with vertices joining various particles and $Z, \:W^{\pm}$ bosons. We say that these processes occur 'via the weak force'. For example, the first part of the weak decay of a muon to an electron diagram as in figure comes from a $\sim \mu \nu_{\mu} W^-$ term in the lagrangian. 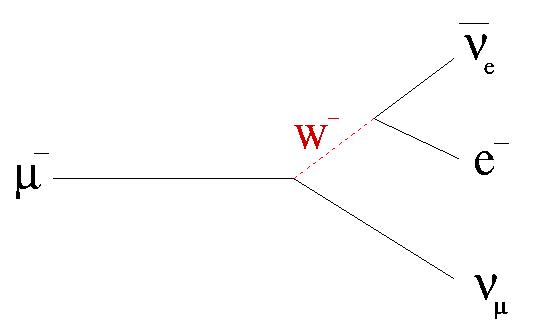 The point is the electroweak theory is a mathematical framework which allows us to treat weak and electric forces together ('unifying them'). It amounts to writing down the initial Lagrangian with the $SU(2)\times U(1)_Y$ symmetry. Although we then make a sort of 'change of variables' in the lagrangian, it is always inside the same framework. At the end all physical processes are a direct consequence of the terms you have in your lagrangian.

Finally, a little more about what happens at the symmetry breaking critical scale. Firstly, when we say energy 'scale' here we really mean 'temperature' of the entire system (e.g. the universe) as a whole. (Mind you this is not the same as firing a 'few' protons at the LHC with energy above the critical scale). As the system cools down the form of the Higgs field part of the lagrangian changes. Above the critical scale the vacuum sits at a nice stable minima of the Higgs potential. As the system cools down this point becomes unstable, while stable minima develop elsewhere (see the wine bottle example). The system thus is forced to collapse into one of the new stable minima, warranting all the business of redefining what the fields are in order to QFT properly. This is part of the so-called Higgs mechanism.

I am not sure what level of description you are looking for. I will start off at a very basic level and maybe modify this if needed. The $SU(2)$ for the weak interactions has $W^\pm$ and $Z$ gauge bosons. The first of these are flavor changing charged gauge bosons and $Z$ is neutral. These have a correspondence with the $\sigma_\pm$ and $\sigma_3$ matrix representation of $SU(2)$. The old theory of weak interactions involved massive gauge bosons, which have a longitudinal degree of freedom. The problem is that at high energy this degree of freedom can propagate in ways that are causality violating.

Peter Higgs proposed a scalar field $\phi$ with a Ginsburg-Landau quartic potential $V(\phi)~=~-\mu|\phi|^2~+~\lambda|\phi|^4$ and at minimum energy can have zero kinetic energy and has a degeneracy of possible states. Along the Mexican hat potential trough the boson does not need to move to maintain its potential configuration, and there are a large number of them. I leave it to the reader to evaluate $\partial V(|\phi|^2)/\partial\phi~=~0$ to find this.

Gauge bosons have two degrees of freedom corresponding to the electric and magnetic field. There is no longitudinal field if they are massless. We may think of this as there being no rest frame where $m~=~0$ exists, and only $m~=~\pm 1$ exist. However at lower energy where the components of the Higgs field $H^\pm,~H^0$ are minimal they couple with the $B^a_\mu$ weak interaction gauge potentials and are absorbed. The loss of these three degrees of freedom in the Higgs field is then in the longitudinal components of the $W^\pm,~Z$ particles. The remaining $h_0$ is the Higgs particle the LHC detected in 2012.

At very high energy the QED and weak interactions are massless bosons with the meaning of charge mixed into hypercharge according to the weak angle. They have the same interaction strength. However, as transverse momenta of interactions or energy approaches the EW breaking scale this Higgs mechanism kicks in so the weak interacting bosons are massive, as seen by having longitudinal degrees of freedom, and they decouple from the remaining photon of QED that remains massless.

Not the answer you're looking for? Browse other questions tagged particle-physics standard-model gauge-theory symmetry-breaking electroweak or ask your own question.