For electric dipole: The direction of the dipole moment is from negative to positive charge, but that of the electrostatic field is from positive to negative. But in the case of magnetostatics, the magnetic field and dipole moment have the same direction. Isn't that a bit strange? Or am I missing something?

When we introduce the idea of dipoles to students, we start off with macroscopic dipoles (like hand-sized bar magnets) for pedagogical reasons. In both the electric and magnetic cases, the dipole moment has an electromagnetic piece and some physical size: charge times length for the electric dipole, and current times area for the magnetic dipole. Your question here is about the interior field of the dipoles, where the distance from the center of the dipole to the point of interest is less than the length scale of the dipole.

In short: yes, there's a tiny region in the interior of an electric dipole where the field points the "wrong" way. But if you are close enough to the charge distribution that you care about this detail, then the dipole approximation is not the tool that you need to solve your problem.

Here is an illustration comparing electric and magnetic dipoles:

In blue the magnetic field lines generated by a magnet. The pattern is similar to a electric dipole with 2 opposite charges.

The two systems are symmetric.

Here is their torque in an external field, note that the electric dipole needs an insulating bar so as not the positive to start moving to the negative. 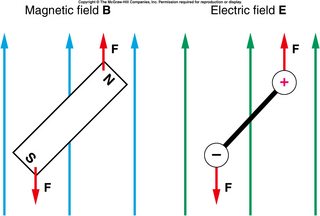 A magnet placed in a magnetic field will experience a torque and will aligned itself along the field lines. Like wise a dipole (made of 2 opposite charges of same magnitude) would too.

Conventions in definition may make a difference, whether magnetic field lines go from north to south or vice verso, similar for electric ones, but this should not affect the physical effects (torque).

I think you are comparing the electrostatic dipole to a magnetostatic dipole made of two monopoles. Magnetic dipole does not consist of two monopoles with opposite sign but rather consists of current loops (as far as classical physics is concerned). These current loops produce fields that are in the same direction as the dipole moment at the center. We define the magnetic dipole moment based on the torques experienced by it in a magnetic field. Since fields and forces act differently in magnetics, it is not rally much of a surprise that it is different from an electric dipole. 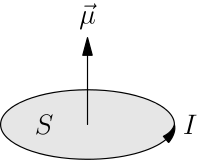 Now, if you have to construct an imaginary dipole with monopoles of opposite signs such that the field produced by it matches observations at far away points, you will have to let the magnetic fields inside the dipole have the same direction as the dipole moment.

Not the answer you're looking for? Browse other questions tagged electrostatics magnetostatics dipole-moment or ask your own question.

3
What makes north pole of a magnet north pole in the first place?
0
What actual difference does it make whether electric or magnetic field lines are open or closed?
0
Direction of dipole moment and electric fields seem to create an issue