Yesterday I went walking on the Lagorai mountain, in northern Italy. Passing near the Lake Erdemolo, I noticed a small part of frozen water from the lake, separated from the rest (the lake was not frozen at all). I found a quite strange ice formation, which I cannot fully comprehend. At the borders of the pool there was a very thin layer of ice with no water underneath, and progressively going towards the center, more layers added up. A picture explains it better: 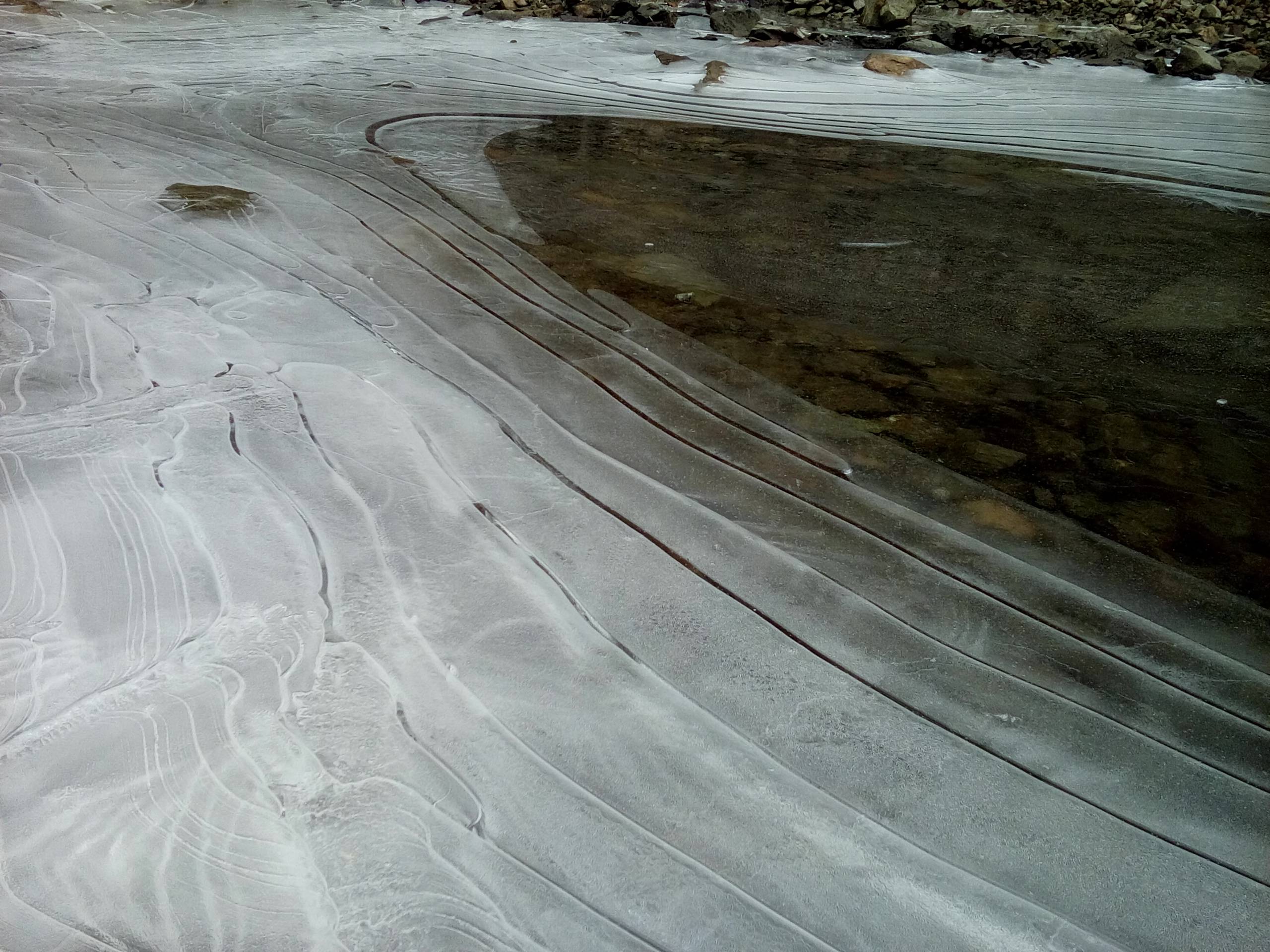 The layer at the center of the pool was very thick (a 5 kg rock hardly managed to brake it) and was covered with a thin layer of non-frozen water. Under this thick layer there was water.

Breaking the ice in various points I noticed that the various layers were supported by a lot of small columns and walls. 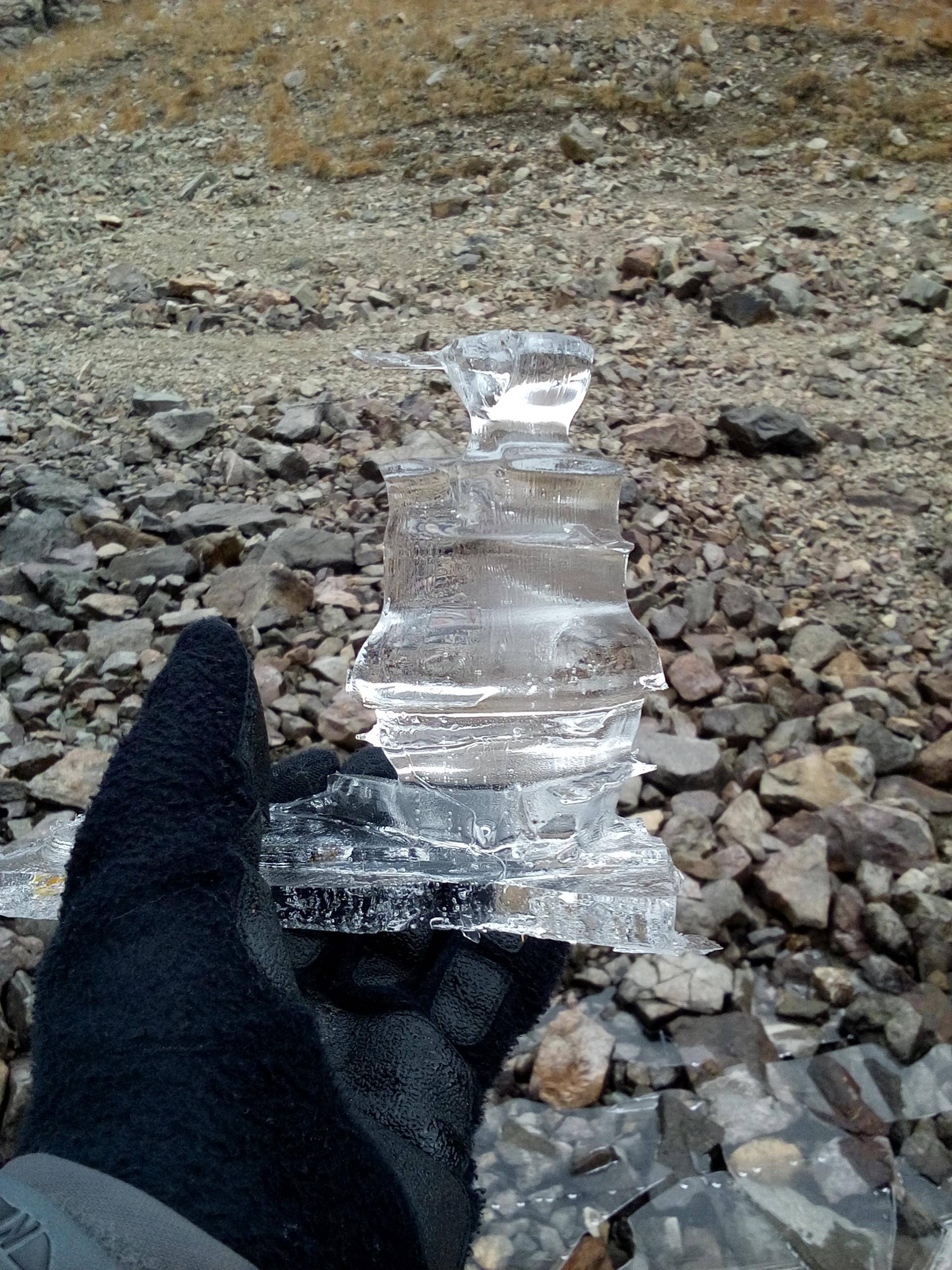 In the image the column in upside down. Those formations were collocated between the layers and the rocky ground.

I thought that the layers might be formed by an alternate solidification-evaporation process during which, once the first ice layer was formed, the water lowered its level (evaporating through the escape routes of the rocky ground). Maybe this can be caused by a higher outside temperature with respect to the ground one. I'm absolutely not sure about this explanation and, even so, I cannot figure out the cause of the columns between the layers. I guess it can depends of the velocity of the freezing process. If this is not too off-topic, can someone explain the cause of such formations?

You might be seeing evidence of 'frost heave'. Moisture in the soil will, in cold conditions, both freeze at the surface (adjacent to cold air), and wick up the existing ice crystal from its (relatively warm) base near the soil, to the cooler upper tip (where the newly arrived water freezes). Thus, ice crystals can be seen to grow upward... if such a field of crystal pillars is then covered with snow, you can (after a few freeze/thaw temperature changes) get a large mass of ice in the air, supported by a few pillars of ice that crystallized days ago from soil moisture.

Usually, the top layer of such a 'frost heave' patch is dirty.

As you say, the water level can go down, but it can also go up (almost all lakes have a source of water).

With that in mind, you can imagine a scenario where you start with a layer of ice above water (because the level lowered), and where a second layer of ice forms on top of the liquid water. Now you have two layers separated by air. But wait... the water level can raise again, filling the air gap. When this water freezes, it gives two layers bounded by ice. If you repeat this process with water getting up and down, you can form a wall as what you describe.

I think that the columns may come from the walls breaking in smaller pieces and then getting reattached to a layer of ice when one forms again on top of the water.

Not the answer you're looking for? Browse other questions tagged everyday-life phase-transition ice or ask your own question.

34
Why does water rise through a hole in ice
2
Flakes of Ice in Frozen Milk and Orange Juice
5
Frozen Pepsi when opened began to fizz and release lots of $C O_2$ and a thick sugar syrup mixture
28
Why are some parts of this ice block cloudy and other parts clear?
126
Why does ice cream get harder when colder?
4
Nocturnal Ice Making: is it possible and by what mechanism?
0
Time required for the formation of ice of some thickness in a lake