What happens to the probability wave of a particle after it goes into a black hole?

Let's imagine standing on a shore, and dropping rocks into a lake. Each rock causes ripples to travel outwards. Now let's imagine there is a monstrous whirl pool somewhere out there in the lake gobbling up waves.. It's quite complex to picture, but In my imagination I could envision a clever enough person analyzing the waves coming back to the shore and deducing things about waves that "got lost" so to speak. Now I understand there was some great debate between Stephen Hawking and Leonard Susskind about information theory and black holes. I don't remember who won that debate, but my understanding is that either way black holes are supposed to do a pretty bang up job of destroying information. So either my simplistic universe is flawed, or maybe I'm over estimating how clever the rock guy could be.. but I don't think so. Let's picture one single rock throw. The outgoing waves at some point get destroyed and you have something like this: 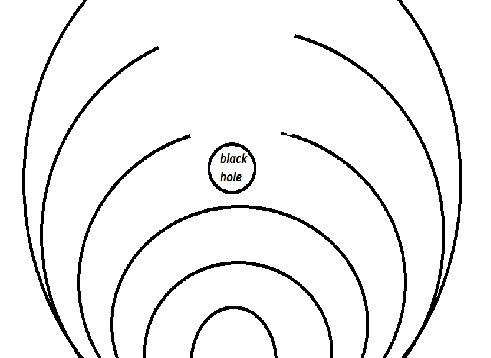 and then at some point the wave pieces that didn't get destroyed reflect back and I can't draw that good and it get's all messy, but surely a lot of information comes back to the shore guy right?

The information paradox is usually proposed in terms of a pure state that falls into the black hole, then the Hawking radiation comes out and finally if the evaporation is thermal and complete, some information is lost and the final state is mixed.

If the quantum wave of a probe can be roughly approximated by a wave of wavelength given by the Compton wavelength $\lambda_c=\frac{h}{m c}$, then usually we assume $\lambda_c << r_s$, that is the object go inside the black hole.

In your example is the opposite, $\lambda_c >> r_s$. In a quantum mechanical sense, the probe is not entering into the black hole and I'm not entirely sure that the paradox really arises, since in quantum mechanical often you can recover information of the system even if some small subset is corrupted (I've in mind quantum error correction). But generically I would say that the paradox still arises, indeed we can picture the wave as a particle that doesn't enter the hole 99/100 times, but the time in which it enters, the information carried by the particle is lost beyond the horizon.

There is no new information paradox on this. A quantum wave can be scattered or can be absorbed by a black hole (BH). There have been calculations done of what the scattering and absorption cross sections are for various kinds of idealized quantum waves approaching. That includes scalar fields, EM fields (photons), gravitational waves (gravitons), fermions, and probabLy a few more cases. For radiation from inside the BH Hawking already proved that they contain no information, which already led to the information paradox, sometimes touted as a bet between Hawking and Sussking which Hawking conceded on.

[there have been and continue to be attempts to solve that, to where Hawking agreed that probably information is not lost, based on some resolution of the firewall issue, but it is still not clear to anyone what is the carrier of that information out, and the mechanism. Hawking lately has been looking at soft hair in BHs that may have that information in then horizon, but nothing too clear yet. Hawking et al on a paper last year (published in journal early 2016) said that, some calculations, no full proof. And I'm sure other papers, too big a topic for this questions. Hawking et al paper at Arxiv at https://arxiv.org/abs/1601.00921]

An example of a calculation of the scattering matrix for a scalar off a BH (and there have been more referenced at the year of the article, in 2003, in the article) at https://arxiv.org/pdf/gr-qc/0312065v1.pdf.

The article does some scattering calculations for scalar fields. As in any scattering calculation in QFT it obtains the S matrices, which determine the cross sections and probabilities of scattering or absorption at different angles, energies, spins etc. When it does scatter the full particle is scattered, with some probability. There is no partial wave detected.

The calculations basically use a quantum description of the incoming particle or wave, in a classical general relativistic BH background, usually done for spherical Schwarzschild or Kerr axially symmetric BHs. Probably also charged versions of those. I have not compiled a complete list of what has been done or the results, but have seen some of them around. Ever since Hawking used that method (a quantum field in a classical GR spacetime), and he and others figured out how to do those, which he used to prove that BHs do radiate, I.e., loose energy in the form of outgoing radiation (usually photons but could be other particles, depends on the energetics and interactions), people have been able to do these calculations. Not always easy, nor necessarily closed form solutions.

Classically it's been known that a classical particle could be scattered off a BH (outside the horizon of course) in some kinematic conditions where it extracts energy from the BH by coming out with more kinetic energy that it went in. that does not violate classical GR, no particle comes out, and energy in a BH is a strange thing (in classical GR the energy can come out, eg, by having the angular momentum reduced, as long as the overall entropy is the same or increases). This was discovered by Penrose and is called the Penrose process. https://en.m.wikipedia.org/wiki/Penrose_process

So, indeed, you can explore the outside of a classical BH, outside the horizon (and some other limits), but it won't tell you anything more about the BH than something about its mass, angular momentum and charge. That is true classically, the No Hair Theorem holds. Quantum mechanically, Hawkings showed particles can come out, but they carry no Information as they are random. Scattering is just outside the BH horizon. I am not sure how they deal with low energy, i.e., long wavelength particles that may thus also be partially inside; the article referenced above in Arxiv says that S vanishes in the low energy limit, but I did not read enough to tell you if the wave had any part of it inside the BH. Remember, as a quantum effect, BHs can radiate. If it did and has some information other than the conserved hair, it'd be a new finding. We would have heard by now, since it's calculations that have been getting done. I suspect no other information has been calculated as comimg back out. Means, it's an unresolved issue.

BTW, these perturbed horizons have not been treated in the full nonlinear GR theory other than some perturbative way, no exact solutions, and usually numerically. The two merged BH discovered on 9-14-15 had their dynamic horizon calculations done numerically, it was impossible to get exact solutions. Gravitational radiation, if we observe it in larger interferometers than LIGO might tell us something about the multipole moments of the merging BHs then. In the observed merger the observations were in accord with the No Hair Theorem, but bigger interferometers can probe it much more accurately. See the LIGO papers at https://www.ligo.caltech.edu/page/detection-companion-papers

Many systems experience an increase of entropy (i.e. lose information), not just a black hole. Classically speaking, when a closed system is partitioned into sections with differing temperature, after a time we will lose the information on which partitions had what temperature. Someone might then claim that an analysis of the individual particles could, in theory, reveal the initial state. But the problem is that quantum mechanically speaking, there is true (we assume) unpredictability in interactions, thus destroying even quantum state information. There are guesses that maybe non-local hidden variables are the cause of that apparent unpredictability, meaning that any behavior is theoretically predictable because there are finite states in the universe, but that is suspect (IMO) and at a minimum currently beyond our understanding.

Not the answer you're looking for? Browse other questions tagged quantum-mechanics waves black-holes or ask your own question.