Why doesn't the Meissner effect follow from zero resistance?

In articles on superconductivity (see, for example, the original BCS paper or Leggett's review article), the Meissner effect is treated as a seperate phenomena that must be explained in addition to the fact that the material has zero resistance. In Leggett's article, he especially mentions that the two phenomena are independent, and one may arise without the other. But thinking about it, it seems to me that any material that has zero resistance must expel magnetic fields. What's wrong with the following argument?

Say you have a ring with zero resistance. The ring has some inductance, L, and you want to thread some flux $\Phi_{ext}$ through the ring. 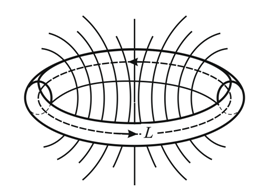 Where does this argument break down?

Your argument assumes the flux in the medium begins at zero, and concludes that it will remain zero, which is true. However, consider a medium that begins with nonzero resistance, has magnetic flux introduced, and then is cooled to the point of superconductivity. In that case, the classical theory you're using just says that whatever magnetic field is in the material when it becomes superconducting will remain there, "frozen" in place as it were. Zero resistance implies constant field (no diffusion), not necessarily zero field. In the Meissner effect, by contrast, any field present in the material up to the transition is actually forcefully ejected when the material becomes superconducting. Something causes the field to diffuse out of the medium very fast during the transition. (The converse is also true: by making the magnetic pressure on a superconductor big enough, you can force magnetic field into it, but in doing so you destroy its superconductivity.) (+! @knzhou!)

Since superconductivity depends critically on the electron-phonon interactions within the material, by using naive EM as you have, many features of superconductivity will be lost. It cannot be thought of as simply the resistance $R \rightarrow 0$ limit of normal metals.

For example, the Meissner effect does not say that there is precisely $0$ magnetic field inside the material; rather it falls of exponentially from the surface with a length scale given by the London penetration depth. In addition, Type II superconductors can develop magnetic vortices within its bulk, so magnetic field is not "perfectly expelled." These characteristics are not present in the more naive $R\rightarrow 0 $ picture, which points to a richer physics phenomenon.

EDIT: To fully answer why superconductivity and normal metals are strikingly different requires an excursion into BCS theory, which I will not do here. And even so, BCS theory is incomplete in the sense that it doesn't describe high-$T_c$ superconductors well, for example. However, let me offer a flavor of why they are so dramatically different.

However, it has been experimentally observed that many metals abruptly go superconducting below some critical temperature $T_c$. Not only that, some insulators go superconducting below some $T_c$. The mechanism for this involves a cooperative interaction between electrons and phonons, which concert themselves in such a way that, even with some impurities, electrons can pass through the material without impediment. Now why does this mess up the picture you described? It's because we can no longer ignore the interaction between the atoms in the metal and the electrons themselves. Properties we previously ignored about the wire now become essential to the physics. Hence the naive EM picture breaks down.

Not the answer you're looking for? Browse other questions tagged magnetic-fields superconductivity or ask your own question.