I understand the theory that a ball thrown from the equator to the Tropic of Capricorn will experience a forward + sideways motion (as the earth spins at approx 444 meters per second at the equator).

But even though the recipient of the ball is traveling at 222 m/s and I am traveling at 444 m/s in an hour's time we will still be squarely facing each other (Excluding all wind effects i.e. if the path of the ball were in a vacuum) the ball would reach him with no side ways deviation? Even though from space it would look like the ball is moving forward and sideways.

I guess you are in the southern hemisphere, because you are talking about the Tropic of Capricorn? That is at about 22 south latitude. I get the equator speed is about 464 m/s. To get half that, or 232 m/s, the catcher would have to be at 60 south, not 22.

There is a way to simplify the problem. Make the earth into a flat disk with the south pole at the center (and the north pole underneath it.

Here's the picture from the viewpoint of space. 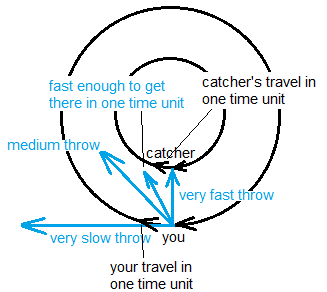 You see, it depends on how fast you throw it, compared to how fast the earth is turning.

If you throw really really fast, the ball will get to the catcher immediately.

If you throw it less fast, but still fast enough to get to the catcher's latitude in one time unit, you see the catcher will have travelled less distance in that time, so it will look as if the ball has curved to the East.

If you throw even less fast, you can see that the catcher will see it curve to the East, and may even keep turning and go away.

If you throw it really slowly, it will just curve away from both of you and drift off into space, appearing to make cycles just because you are making cycles.

Of course, it gets more complicated when gravity gets involved, which at low speeds keeps thing from drifting off into space. In that case, the ball will basically go into an elliptical orbit, which from your viewpoints will look like crazy cycles (assuming it isn't caught, there is no air and no ground to crash into).

I assume you want an intuitive explanation to your question. If you want me to prove it , just tell me from the comments. 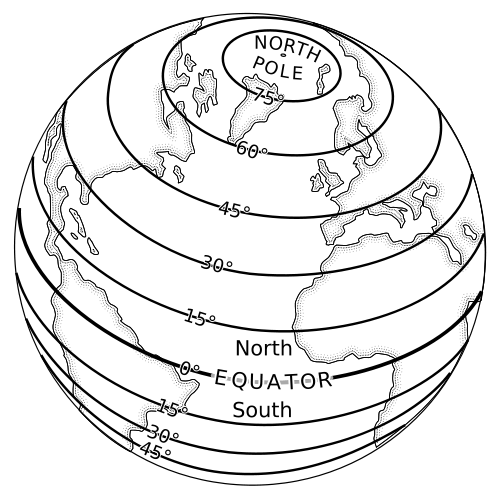 Think of the movement of the ball as a sum of movement sideways and a movement towards the person who is receiving the ball. As you have mentioned, when you are at the equator, you move at a higher velocity than when you are at the Tropic of Capricorn. However, since the circle around which you are moving (your latitude circle) is larger than the circle in which the other person is moving, even though you cover larger distances in the same time,you are still facing each other. . 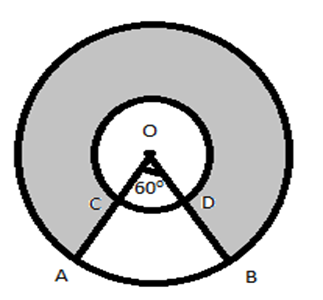 When you throw the ball towards the other person, the ball's sideways motion doesn't change because gravity is pulling the ball purely towards the center and does not offer any force sideways (of course, Earth will also be moving through space around the Sun, but we will not consider that as it will make things more complicated). So, as your ball travels towards its destination, it's gonna be travelling over things on Earth having velocities less than 444 m/s but your ball still has a sideways velocity of 444m/s. So, it will move sideways (with respect to the ground) as it approaches the other person.

If the other person were able to see you throwing the ball, he/she would see the ball initially coming towards you but slowly veering sideways as it approached them (the ground seems to be at rest to them, but is actually moving with a smaller sideways speed than the ball).

So, in conclusion, the reason you are still facing the person is because you are still in your circle and your higher velocity is compensated by the fact that you are moving in a larger circle and still cover the same angle. By atmosphere moving with you, is assume you mean everything around you moves with you (since we are not taking into account things like drag). But even though the other things appear to be at rest, they are still moving with a lesser velocity than you.

Not the answer you're looking for? Browse other questions tagged newtonian-mechanics forces reference-frames centrifugal-force coriolis-effect or ask your own question.