I'm confused about the application of Faraday's Law in to situations with a circuit made of two loops that enclose two different changing magnetic fluxes. Which of the two is correct?

I'll made an example to show the two options. Consider the circuit made of two loops.

In case A each encloses a different solenoid, where magnetic field $B$ changes in time (and is directed in two different ways).

In case B only one of the loop encloses a changing magnetic flux, since there is no left solenoid. 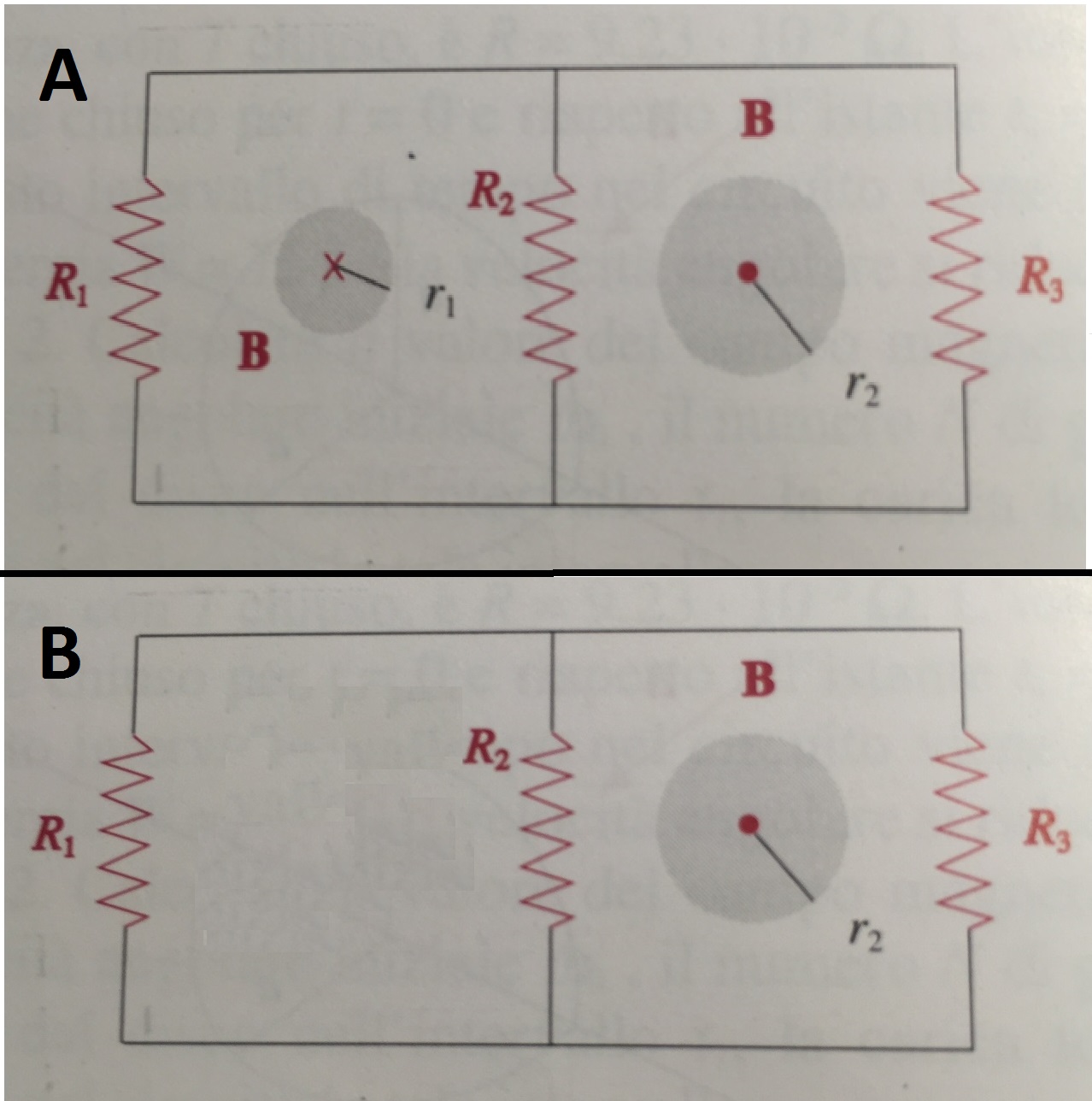 In case A, according to 1., the current in the left loop should depend only on the magnetic field of the left solenoid.

Nevertheless in both cases one branch (the one with $R_2$) is in common between the two loops and there the emf should be affected also by the right solenoid (and be nonzero in case $B$). This leads to contradiction with things said above.

Ask yourself, is there any changing flux through my loop? If there is, that is your emf. If there isn't the emf is zero. Note however, that zero emf in a loop does not mean zero current in it.

Now, find all the potential drops or rises the current in the loop undergoes and set their sum to be equal to $\frac{\mathrm d\phi}{\mathrm dt}$. During this step, I find the mesh current method most useful.

..and then at just the right loop:

You can do this for the "super"-loop as well:

All three equations give the same result.

Regarding 2., the emf in a loop is not influenced by surrounding emfs, the current in it is. In image B, there is a current in the left loop, but the sum of the potential differences that this current encounters will be zero, because the emf is zero. ie:

You can rewrite the other two equations as well and change $\frac{\mathrm d\phi_1}{\mathrm dt}$ to $0$ in both.

I hope this helped!

Now, using stoke's law, we know that for the curl of a vector function $F$ over the surface $S$,having boundary $B$ the following is true:

Applying this to maxwell's equation above, we have, for a chosen area $S$ and its boundary $B$:

So, to summarize, choose a circuit path, and find the flux through that boundary only. Find the emf, and hence the current in all the branches. Do this for all possible contours in the circuit. Apply the superposition principle for every branch, and hence find the net current through every part of the circuit.

Not the answer you're looking for? Browse other questions tagged homework-and-exercises electromagnetism electricity electric-circuits electric-current or ask your own question.

6
Reducing Eddy current losses
2
Inductance of a solenoid?
2
Walter Lewin's lecture on Faraday's law
1
How large of a radius can a closed loop around a changing magnetic field get for it to still experience an induced emf from Faraday's Law?
0
How to derive and write Kirchoff loop law for circuits including capacitors?
0
Faraday's law with non-induced electric fields
0
Electromagnetism Ampere's law Application to solenoid
1
Induced Electric Fields and Faraday's Law
0
Faraday's law and inductors