Fermi-Dirac distribution in the high-temperature limit

I am reading "Electronic Transport in Mesoscopic Systems" by Supriyo Datta and am a little confused by his discussion of the Fermi Dirac distribution function, which is given by:

where $E$ is the energy of a state, $T$ is temperature, $E_f$ is the Fermi energy (the highest occupied state at $T=0$) and $k_B$ is Boltzmann's constant.

The author claims that in the "...high temperature or the non-degenerate limit $(\exp\left[E-E_f\right]/k_BT\gg1)$" it has the following simple form:

Question: I agree that when the exponential dominates the denominator this is the result, but is there any justification in calling it a high-temperature limit?

Indeed, I would think that if the temperature is high, it would make sense to say that $\frac{E-E_f}{k_BT}\ll 1$ in which case the exponential does not dominate the denominator at all!

I would brush it off as a typo, but when I look at a graph of Fermi-Dirac distributions for different temperatures it does seem that they take on the form of an exponentially decaying function when the temperature is high: 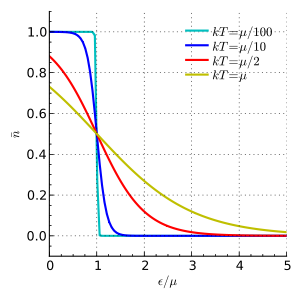 I think what you are missing is that the chemical potential is not a constant, it is temperature-dependent. At high temperatures then $\mu < 0$ and $\exp(-\mu/kT) \gg 1$. You could have a look at this answer to another question for an explanation of why that is.

Not the answer you're looking for? Browse other questions tagged energy statistical-mechanics temperature fermions chemical-potential or ask your own question.

0
Fermi-Dirac Statistics
11
In what limit do we *really* get Maxwell-Boltzmann statistics from Bose-Einstein and Fermi-Dirac?
0
Fermi-Dirac distribution for $E\to 0$ but $T >0$
4
Why does a quantum gas lose its "quantum nature" in the limit $(\epsilon-\mu)/k_BT\gg1$?
1
Fermi level of a semiconductor