From a physics perspective, it seems like the best way to be sure to knock all of the pins down would be to transmit the most energy to the ball/pins system. From the calculation for kinetic energy, $$ T \propto m v^2 $$ we can see that increasing the velocity would be much more effective than increasing the mass. Since you can throw lighter balls faster, it would make more sense to throw a light ball fast, rather than throw a massive ball more slowly.

I'm not the best bowler, so I'm not always very accurate with my throws. This strategy works better for me and I get more strikes by throwing a light ball fast. What differences are there at the professional level that might cause all these factors to change, making the heavier ball the better choice?

The main things to consider when bowling are:

As stated in one of the comments, a heavier ball is superiour on the first point, because a slight swing of the wrist has a larger influence on the lighter ball. Of course, the ball can't be that heavy that you struggle to swing your arm, because then, the accuracy gets worse instead of better.

On the next points, the heavier ball is always better. To put it clear: when a truck hits an apple, the apple will notice and significantly change velocity, while the truck is hardly influenced and has enough kinetic energy left to knock some other apples away. 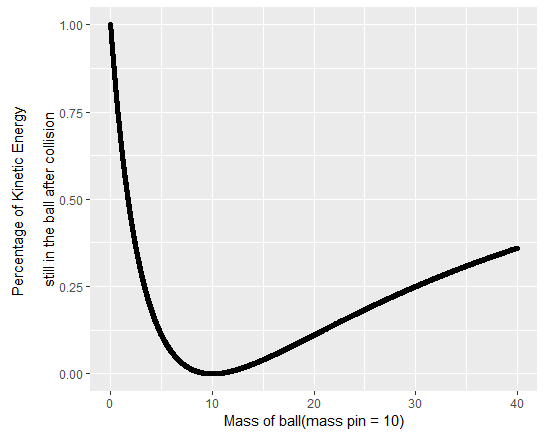 This maximizes for a ball with mass 0. A ball of weight 0, however has the clear disadvantage of not being able to knock anything down. After becoming zero when both ball and pin have the same weight (the pin gets the velocity of the ball and vice versa), it rises again with increasing ball-weight.

let's say, independent on the ball's weight, the kinetic energy it starts with is always $T$. Before the collision, the ball has a velocity $u_1$ and the pin velocity 0. The velocities after are $v_1$ and $v_2$.

For the velocity of the pin after the collision, this gives: 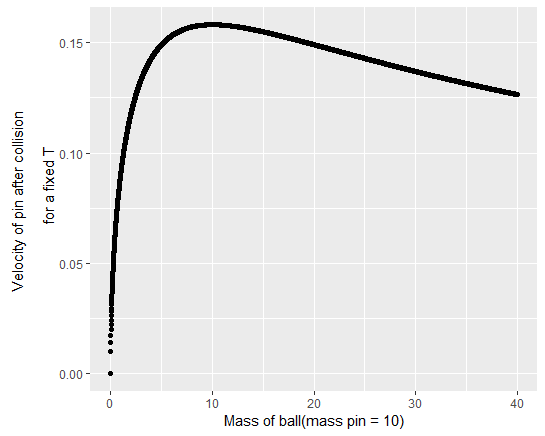 Combine this with the graph above and it is clear that a heavier ball is better.

(ps: A mass lower than the mass of the pin is a bad idea for a different reason too: supposing an elastic head on collision, the ball will bounce backwards and won't hit any other pin)

For a fixed amount of kinetic energy to start with, it's not just the heavier the better: quite a lot of pins will not be knocked down by the ball itself, but by other pins. To maximize this, the velocity of the pins needs to be large. As the ball gets heavier, the starting-velocity will decrease and the velocity of the pin after the collision as well (see second graph). For that pin itself it won't matter that much: it will fall. With lower velocity, the probability of that pin knocking down a next pin, however, will be lower.

First, I will suppose that the bowler can supply a constant kinetic energy $k$ to the ball regardless of its mass, and will search for the optimal mass $m$ for the ball that transfers to a pin with a known mass $M$ the largest possible speed for the energy $k$. 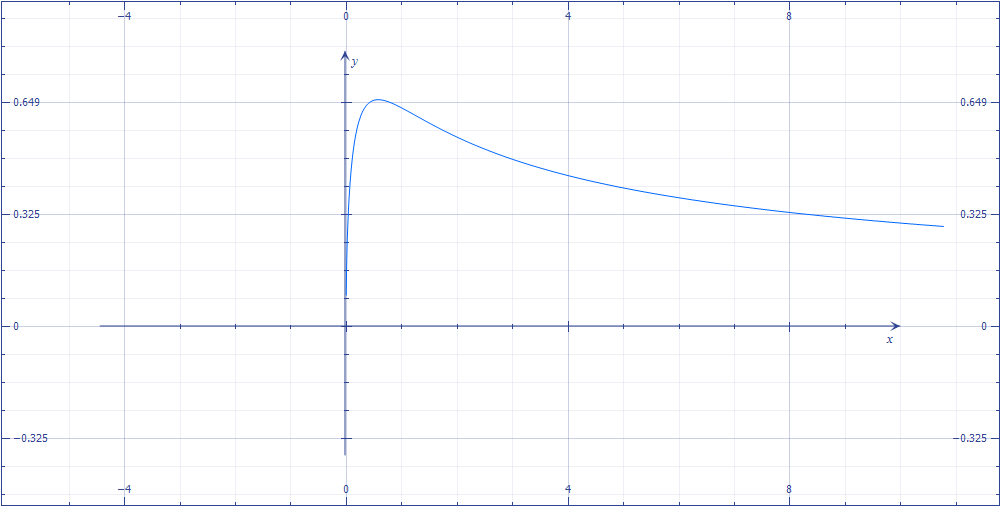 It reaches its maximum at $m=M$, so, if you where shooting at a constant energy, the optimal mass is that of the pin.

Well now if we supposed that the player can apply a fixed momentum at the beginning ( instead of fixed energy ), similar calculation will lead us to :$$u_2=\dfrac{c}{m+M}$$which is clearly maximum for $m$ minimum, though smaller masses suffer more energy loss on the way, so you'd have to find an optimum somewhere in the middle.

2
Skiing downhill
4
Ten-ping bowling: Can a ping pong ball knock over a bowling pin?
1
Confusion about gravity
0
What would happen if a ball flew through the open window of a car?
2
Is a heavier baseball bat better than a lighter one?
1
Why do steel Newton's balls work?
0
Why do the surfaces in contact of two colliding balls deform?
2
Why do balls bounce in terms of force, momentum and energy?