Change in momentum during collision of car and truck

Someone please help, I am so confused with this conceptual question.

If a car mass $m$ and a truck mass $M$ travelling at the same speed $v$ collide head on and stick together, which vehicle experiences the greater magnitude of change in momentum?

I was given an explanation in terms of Newton's third law with the action and reaction force being equal and opposite so the magnitude of change in momentum is the same. I get this.

However, what I really don't get is why, if I write down the change in momentum like this ($v_2$ being final velocity of both vehicles):

These two do not equal because the mass of the truck is larger, so wouldn't the change in momentum of the truck be greater? Why is this method of thinking about it wrong? If anyone could explain it I would be really grateful!

The two vehicles have separate momenta initially, and share a momentum after collision. While the magnitude of change in momentum for each individual vehicle can differ, the system conserves momentum as a whole.

Consider two objects colliding, one with momentum $p_1$ going right, and one going left with momentum $p_2 = -2p_1$. Before collision, it is clear that the magnitude of momentum of the second object is larger than the first, or $p_2 > p_1$.

After collision, the objects stick together and as a whole move with momentum $-p_1$, due to conservation of momentum.

This implies that although the momenta of the two objects change by different amounts, they change by amounts which will ensure that the total momentum after equals the sum of the momenta initially. $p_1$ is changed more than $p_2$, but the sum of $p_1$ & $p_2$ does not change. 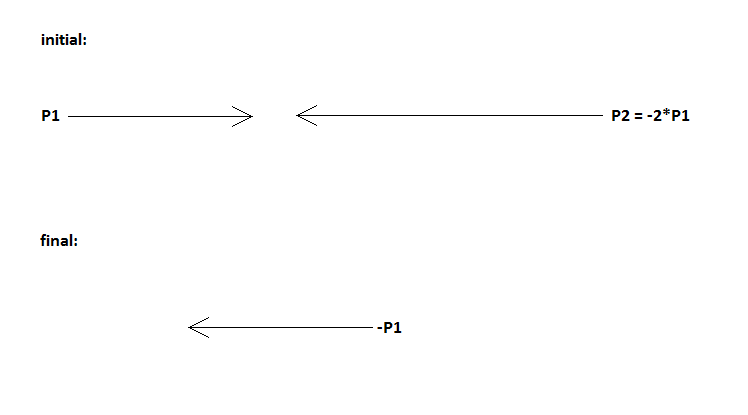 After collision, the vehicles are stuck together, so they will share their mass and velocity.

The way you have written the change in momentum, both vehicles continue moving in the same direction after the collision as they did before. This is impossible, unless they pass through each other.

Not the answer you're looking for? Browse other questions tagged homework-and-exercises newtonian-mechanics forces momentum collision or ask your own question.