Given that ice is less dense than water, why doesn't it sit completely atop water (rather than slightly submerged)?

But for ice : what I am trying to understand is why doesn't the water (being denser than the ice) seek to reach the bottom, and the ice sit flat on top of it (as in the left image)? Instead, some part of the ice is submerged in the water (as in the right image), and some sits on top it. 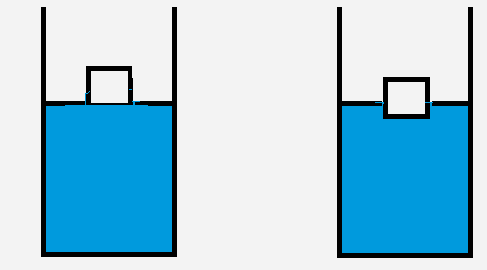 When put in water, an objects sinks to the point where the volume of water it displaces has the same weight as the object. Archimedes was the one who discovered this.

Actually, in the case of lead, if the water were deep enough, the lead would sink to the point where its weight equals that of the water under pressure at depths. As lead will compress as well as the water, that may never happen, but for other objects and/or fluids it might.

This is also the reasons why helium-filled balloons float up: their weight is less than that of the same volume of air. As they float up, the balloon expands, while the air gets rarer and hence lighter. At a certain altitude the two will be equal and the balloon will stop rising.

I like to answer by reinterpreting your question: if you expect the ice to be completely atop the water because ice is less dense than water (as indicated in your left image), then you would also expect the ice to be completely below air because ice is more dense than air (in order for this to be true, think pushing your ice cube down into the water so that it's top surface is level with the water surface). Both is not possible at the same time, obviously. So you see that your reasoning does not give you a well-defined solution, and hence your reasoning (should it not sit completely atop water?) must be false.

I think the real question you're asking here is: why do less-dense fluids completely stay above more dense fluids, whereas less-dense solids partly sink?

If the ice covered the same area as the water below, then it would sit completely on top of the water. That's the case in a completely ice-covered pond.
But because the ice does have a non-negligible weight, the ice-water surface has higher than atmospheric pressure – this is what supports the ice layer from sinking. However, if there's any gap in the ice cover, the excess pressure will push water up until its own hydrostatic pressure compensates it. In particular, if most of the surface in not covered with ice, then there will be a lot of water rising above the bottom of the ice. This is more sensibly described the other way around: the ice sinks some way into the water.

Now, that gives you a state which is not quite optimal, energetically: there are portions of water sitting higher than portions of ice. If you could swap these portions, you'd get a more stable state. 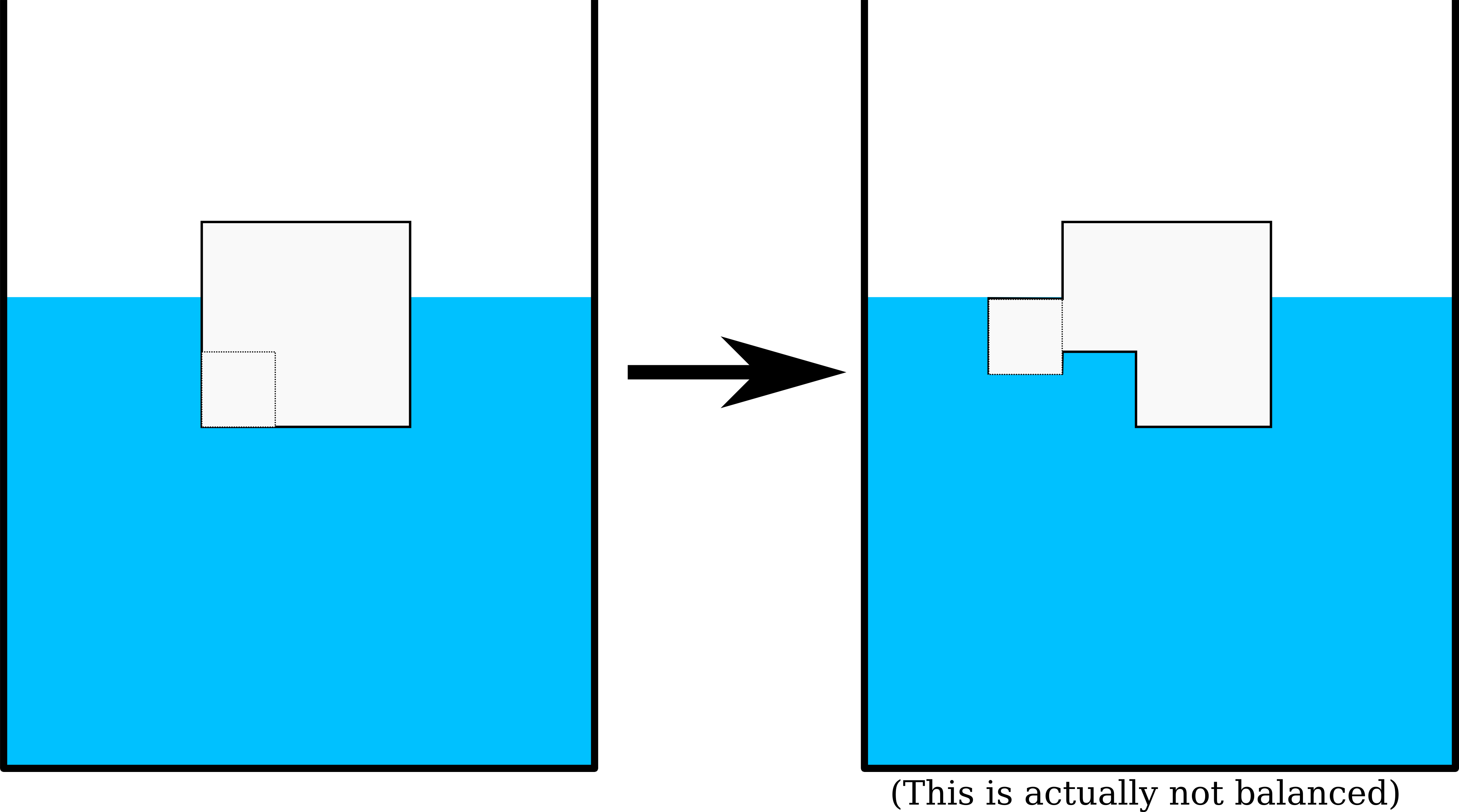 The limit of this process is a state where all ice is sitting above water. However, since the ice is solid, you can't really do this without cutting / breaking off pieces of ice.

In the case of two fluids of different density, it is however easily possible to move portions of the lighter material around, and because it's energetically favourable it will actually happen automatically.

The difference between the picture of the liquids all nicely layered on top of each other and an ice cube in water is that the liquids can change their shape to fit the shape of the container while the ice cannot. If the ice could change its shape and flow to fill the container, you would see exactly what your intuition predicts: the ice sits fully on top of the water. In fact, if you visualize a lake that has frozen over, that's exactly what you get! However, your ice cube cannot flow like that. So, instead, it follows Archimedes's principle, as others have suggested, and "displaces" an amount of water equal to its mass. Since it is less dense than water, that amount of displacement will lead the ice cube to rest partially submerged.

As for the marbles shaking to the top, that's slightly different. It's the same principle, just with a twist. In the case of the container of marbles being shaken, it's a stochastic process. The statistical expectation is that the average shake will cause the less-dense objects to rise to the top and more dense objects to sink. However, we rarely shake them enough to fully separate the marbles into distinct crisp layers. Compare this to liquids. The equivalent case for a liquid would be lots and lots of little marbles, and you're shaking them continuously really really fast. Naturally, we see more stratification in liquids than we do in solids, simply because of this.

Note: there is also a second effect in the case of the marbles. The above example occurs only if every object is of the same size. In the case of mixed media (such as a container of mixed nuts), this effect is overshadowed by another effect. Small objects can pile in underneath large ones, so in general the large ones (such as the macadamia nuts) rise to the top.

Even in this case, with an effect which is more pronounced than density, we don't see a perfect stratification of the mixed nuts. There's always a small number of them that are not in the "right place," such as a peanut that manages to get thrown on top of a sea of walnuts. So when you compare three cases, the stratified liquids, the ice on top of water, and the container of marbles, you actually don't see the stratified liquids and marbles "acting the same" and ice acting strange. You really see the liquids being most stratified, then ice on top of water, and the marbles actually provide the least stratification of the three examples. If your intuition tells you otherwise, that may suggest that your intuition is accounting for some of these random factors for you, and biasing your results.

This means that the submerged volume (v') is less than the cube's total volume. That also means that the cube will not fully submerge in water, provided no external force is applied.

Lots of good answers already, but I think this is the kind of intuitive answer that you're looking for:

It sounds silly until you realize it conveys the crucial point: if you take the part of the ice that is not touching the water (which is practically all of it except the molecules at the submerged surface) and replace it with some other material of equal weight and center of gravity but different density, then, intuitively, nothing should change -- even if the density of the object is higher now.

This intuition should tell you that low density is neither necessary nor sufficient for flotation. Rather, it's only necessary to prevent complete submersion, which of course the ice is not doing. How an object actually floats would depend on other factors, like the shape of the object, its center of gravity, and how it was initially submerged in the water.

Hope this addresses the crux of the issue for you!

People have been answering based on force balance, but there's an equivalent (and, in my opinion, more satisfying) answer based on energy conservation.

Suppose the ice cube is initially just on top of the surface of the water. If you lower it a tiny bit into the water, a tiny bit of water will be forced to move up, increasing the gravitational potential energy. But the entire ice cube will move down, significantly decreasing the energy. So the minimum energy configuration always has the object sinking into the water at least a little bit.

In the ice cube example, the 'lighter fluid' being pushed up is air, not ice. Since air is much lighter than water, the ice cube sinks.

I would say what is shown in your second image out of three, where the piece of ice is on top of the water, is statically impossible because the pressure on the water surface under ice is greater than the pressure on the water surface between the ice and the walls of the container, so water is squeezed up between the walls and the ice. On the other hand, if the ice fit tightly in the container, it could "float" on top of water.

Not the answer you're looking for? Browse other questions tagged free-body-diagram density buoyancy fluid-statics or ask your own question.

1
How deep would a body of water have to be for a cube of lead to suspend in it?

35
Before a once-warm lake starts to freeze, must its temperature be 4°C throughout at some point?
4
Why is ice less dense than water?
1
Why does a metal boat float?
4
When does a block of ice begin to float in itself?
1
Do denser objects generally move down towards the "centre" (where $F_g = 0$) of a gravitational field relative to a less dense object?
0
Relationship between gravity and density
3
Does buoyancy exert the same or different upward force on two dissimilarly shaped, but same volume objects?
2
How does Upthrust/buoyant force act on an object?
1
Why ozone is found so high up in atomosphere?