We know the optimum angle for greatest horizontal displacement when launching an object with projectile motion is 45 degrees. How to solve the angle when it is real long distance around the earth where we cannot assume that gravity is constant but is given by $F=\frac {-GMm}{r^2}$. I use differetial equation to solve it and obtain 45 degrees.

First, for the vertical distance $y$, change $v=u-gt$ to $y'=u-y''t$. Then solve it to obtain a function $y(t)$. When $y'(t)=0$ we have the time for maximum vertical distance. Then insert the value to horizontal equation.

This is far from an easy problem. In constant $g$ we determine the total flight time from $v_{0,y}$ (which contains the launch angle) and $g$, then insert it into $v_x(t)$.

So let's see if we can do that here.

Although this can be integrated and has an analytical solution, its solution cannot be made explicit in $t$. So a vertical flight time cannot be easily obtained here.

Provided that the launch velocity $v$ is less than the escape velocity, the trajectory will be part of an ellipse (in red in diagram below) with the centre of the Earth at one focus (F). The shape (eccentricity $e$) and orientation $\theta$ of the ellipse are determined by the launch velocity $v$ and angle $\alpha$ (here measured relative to the vertical). The launch and landing points (A, B) are intersections of the ellipse with the circle of the Earth. The range (distance along surface of Earth between A and B) is $2R\theta$. 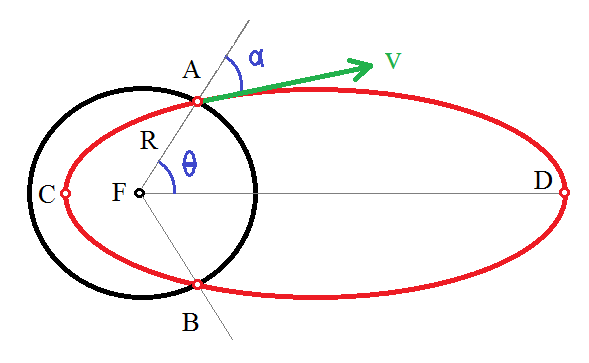 Solve these 2 equations (perhaps by trial and improvement, or some other numerical method) to find angle $\theta$.

If the velocity is high enough for the projectile to escape earth's gravity then the distance can be assumed to be infinite.

If the perigee distance of the projectile is less than the radius of the earth, its trajectory intersects the perimeter (surface) of the earth at two points. The angle you are looking for is the angle of intersection between the two curves.

A bit late, but I'll share my (geometrical) answer to this.

A Kepler orbit is described by an ellipse with the COM of the planet at one of the foci. I made a drawing of the solution here: 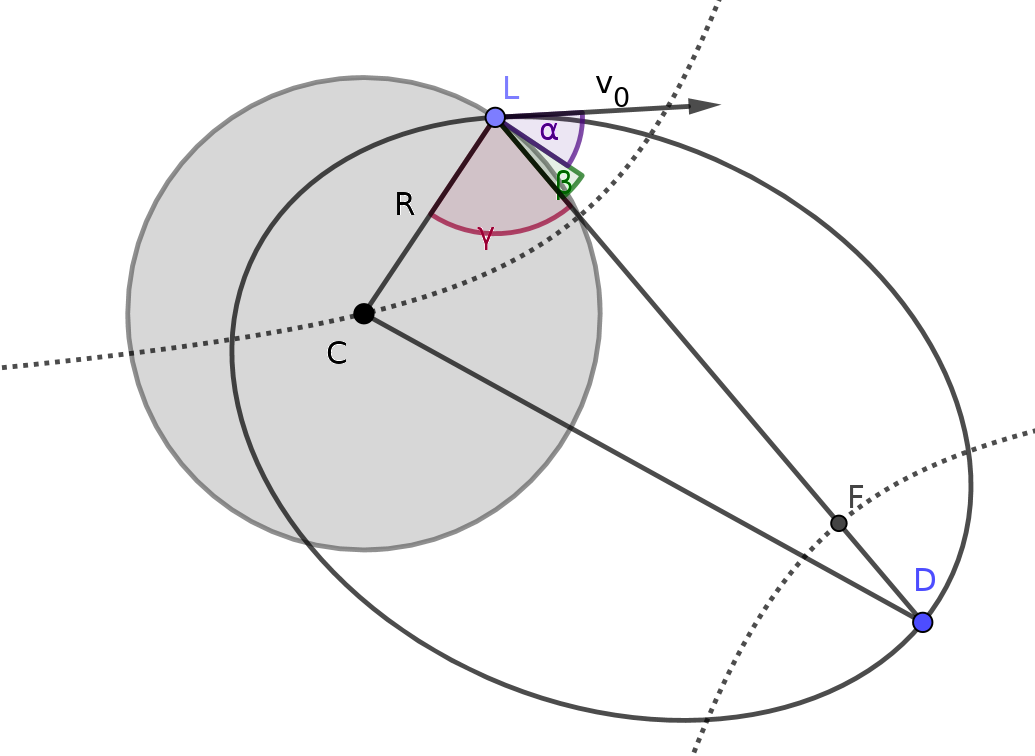 The nice thing about this scenario is that we can just minimize the orbital energy (as we are starting with no velocity, this will be the optimal orbit in terms of required launch speed $v_0$). The orbital energy per unit mass is $$\epsilon=-\frac{GM}{2a} \overset{t=0}{=} -\frac{GM}{R} + \frac{1}{2}{v_0^2}.$$ Hence, the best orbit is that of an ellipse that minimizes semi-major axis length $a$. It should go through launch point $L$ to destination $D$, which has one focus on the COM of the planet $C$.

An ellipse has the property that any rays (light rays for example) that come from one focus reflect to the other focus. In other words, the angle bisector is perpendicular to the ellipse. Using this, we get an expression of the angle: $\frac{1}{2}\gamma+\beta+\alpha=90^\circ$. Next to this, we have that $\gamma+\beta=90^\circ$. Combining these, we find the optimal launch angle: $$\alpha = \frac{1}{2}\gamma$$

Destination and launch both on the ground

Not the answer you're looking for? Browse other questions tagged homework-and-exercises newtonian-mechanics newtonian-gravity orbital-motion projectile or ask your own question.

-1
What velocity has a mass when launched tangently on one side of moon, to let it arrive at a position diametrically opposite on the moon?
1
Projectile motion with non-uniform gravitational acceleration
7
How to calculate a ballistic trajectory for a suborbital flight?
0
Orbit of detached mass